The Healing Has Begun And Is Ongoing 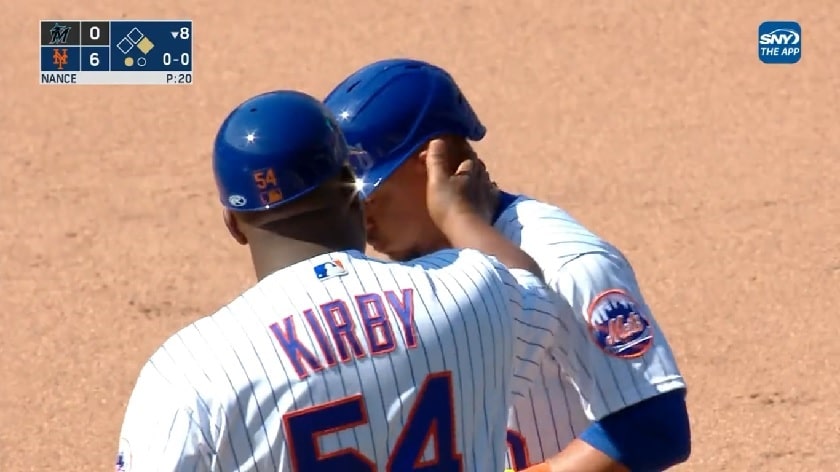 Here’s how you know it’s a good season: The Mets stranded the bases loaded in the first inning after only scoring one run, and of course everyone was saying … and if they weren’t saying it they were tweeting it … and if they weren’t tweeting it they were thinking it … that it was going to haunt them for the rest of the game. And as it turns out, stranding the bases loaded meant absolutely nothing towards the outcome of the game. It’s almost a shame because I had J.D. Davis “swinging at pitches at his eyes” jokes ready to go. You would have laughed. You would have also cried, but you would have laughed again.

No, J.D. Davis’ propensity for swinging at balls coming at his eyes did not matter. David Peterson weaved in and out of trouble for 5 and 1/3 innings, and the bullpen gave up one hit the rest of the way in a 6-0 victory. Peterson also had the extra stress of waiting for his wife to give berth but was somehow able to block it out and just concentrate on a lineup where Miguel Rojas was the cleanup hitter. As for the bullpen? I still think some trade deadline reinforcements are in order but it’s worth noting that Adam Ottavino has been very good this month, and Drew Smith is probably the most trustworthy pitcher you’ll find before Blaster Jaxx and Timmy Trumpet hits the speakers.

The Mets did their usual Mets thing and scored runs in ways that don’t necessarily lend themselves to highlight feeds. A bases loaded walk, two sacrifice flies, and a run that Jeff McNeil scored when the pitch rolled away from the catcher by ten feet. It was a sight to see but it had a cost as McNeil left the game due to right hamstring tightness. And if that wasn’t enough, Davis was hit in the pinky late in the game and both are day-to-day because everybody needs to be day-to-day on this team as some sort of indoctrination. (Thankfully, Max Scherzer is going to be an honest to goodness Rumble Pony tomorrow so maybe that will truly make his return imminent.)

The last two runs in the Mets’ 6-0 victory were driven in by Eduardo Escobar on a hard hit two run single which snapped an 0-for-23 streak. It’s a great way to cap off the game and hopefully start a new era in Fogo Power. It helped the Mets to another series victory to send them on their way to Houston on a happy flight. But the capper to the day was finding out that the Mets signed Ender Inciarte to a minor league deal. You remember him, right? The guy that did this:

That’s among many other things to torture the Mets over his career. It prompted me to tweet this:

Ender Inciarte has killed us for years. Happy to have him on our side, finally. @enderinciartem #Mets

I’ve long said that Ender Inciarte is the kind of pain in the butt that we’d love if he was on our side. Well now he is, and his first official act as a New York Met? He liked my tweet.

The healing has begun.

1. Not Ender Inciarte
2. Not anymore