The Inches We Need … 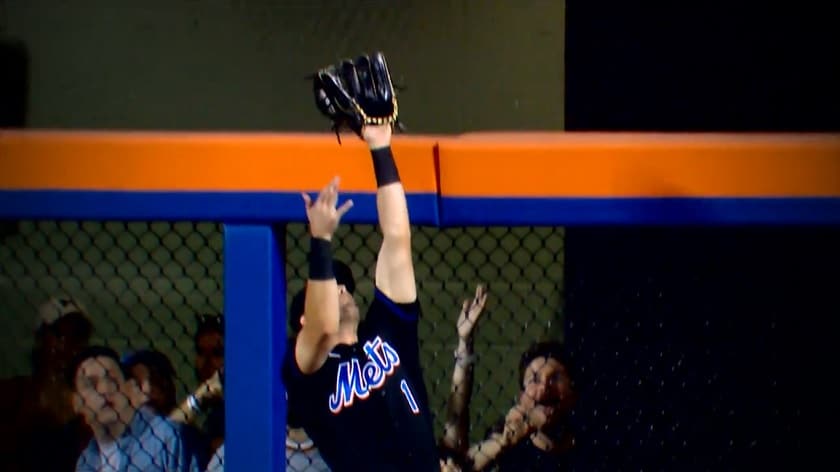 Taijuan Walker pitched 7 and 1/3 great innings tonight, and he did so while bringing his splitter back slowly. He was going primarily with the sinker/curve/fastball first time through the lineup, then slowly brought the spiltter back in, throwing 24 of them total out of 100 pitches. He had to get away from it because of the blister he suffered during his last start against the Pirates which was a bad one, and now he brought it back and got a couple of outs with it. So he’s really won his last two games by being three or four different pitchers, which I can’t even imagine.

The Mets got on the board first in hilarious fashion. Tomas Nido blooped a single to right with Escobar in motion from first base. Escobar was chugging hard and Joey Cora was waving the arm out of his socket. Then for a brief second he put up the stop sign but then he realized that Escobar was already three or four steps by him so Cora decided to make it look good and keep waving him around. A good throw actually would have gotten him, but Ben Gamel unleased one of those Strawberry throws from ’89 where it was going 100 miles per hour but landed about a mile up the road and the Mets had a 1-0 lead.

Daniel Vogelbach hit a dinger to make it 2-0 in the 4th, and they needed that insurance run as the Pirates put together a rally that would not have met with Spencer Strider’s approval. An Escobar error, a single to right, and a tapper to third by Michael Chavis brought home a run. But the Mets would get out of the inning with three outs that also wouldn’t have met with Strider’s approval. Two hard outs to the outfield, then this …

I thought it would be the seminal moment in the game, but it was only the first one.

The Mets extended the lead in the 6th on a sac fly by Pete Alonso in the 6th and a single by Brandon Nimmo in the 7th to give the Mets a 4-1 lead. So with Taijuan Walker at 91 pitches (thanks in part to a five pitch first inning), Buck rolled the dice and left Walker in to face the Pirates in the 8th. He got the first out but gave up a single to set up ONeil Cruz, who was the batter who got robbed by McNeil in the 5th.

An absolute bomb from Oneil Cruz and the Pirates cut the lead to 1 pic.twitter.com/VOTVl2xJCN

I actually pulled out the “too high too high” from Major League 2, but who cares, it was gone. Walker and the rest of the league will probably have to learn that you can’t just go high out of the strike zone against a 6’7″ shortstop. You have to throw one just about eight feet high and hope that Cruz pops it up.

So Edwin Diaz comes in the game in the 8th for the five out save, and gets out of the eighth fairly easily. Then in the ninth he committed the cardinal sin of walking the leadoff batter. The Pirates then brought in Greg Allen to steal a base, and then came the other seminal play in the game.

NIDO TO GUILLORME FOR THE CAUGHT STEALING! pic.twitter.com/SwFHJzCLvH

Greg Allen was fast enough to be safe, easily. But Luis Guillorme blocked the bag, called for the replay, and the call was reversed. The Mets had the first out of the inning, and that’s why Guillorme is going to get that Utility Player Gold Glove. Diaz, who was a little shaky up until then, Hulked up and got Ke’Bryan Hayes swinging. He looked good against Cal Mitchell too, until we got one final scare:

More epic production from the Mets crew and nearly an epic moment for Cal Mitchell, but it ends up a flyout that ends the game!

The Mets win and the Phils lead in Atlanta, they'll be hoping that result holds. pic.twitter.com/llEZ86QjQX

Jeffy is sitting at home saying “See? You like my dimensions now, eh?”

The Mets are now halfway to putting the Pirates to bed and halfway to calming everyone down. The bad news is that the Phillies bullpen is still atrocious, and the N.L. East lead will remain at one game for now.

I wrote last night’s blog at about 6AM, as I crashed on the couch earlier than usual. It wasn’t until after I wrote it when I found out that John Stearns passed away. Some of you may not remember him, as his salad days were all the way back in the deep dark 70’s. But those who remember him will tell you that if he had played with one of the winners, he would have been as much a folk hero as Jerry Grote or Gary Carter. He was a tough sonofayouknowwhat along with being a four time all star. I remember him as “Dude”, but a lot of people called him “Bad Dude”. He was a bad man, but a good dude all the way. It fills my heart that he made it to Old Timers Day for one final and well deserved celebration. May God keep him and bless his memory.

The Braves just showed someone, who is not Timmy Trumpet, playing a trumpet as Contreras came up to Narco pic.twitter.com/oA2WieYJOA

Hey Cobb County, the owner of the damn song proclaimed Edwin Diaz the sole proprietor of his song for entrance purposes. Let it go, Elsa.

When you need some runs, you have @PeterMoylan do a rally dance. pic.twitter.com/Uup1LuHEvp

The one time I was willing to accept a 5-0 lead of theirs with good cheer, they give it back. Good reminder to maintain one's values system.