Three Wins In One 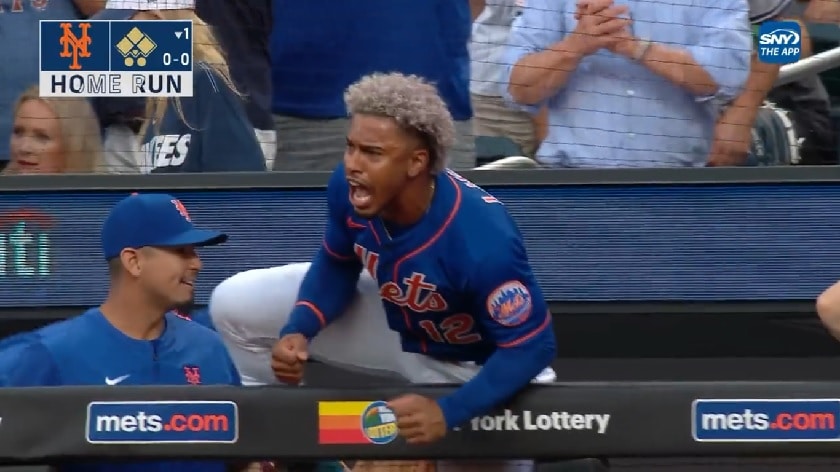 So if you’re putting together a list of the wildest Mets moments in the history of the regular season Subway Series, Tuesday’s 6-3 win probably isn’t in, say, the Top 4 (which of course would be the Matt Franco walk-off, the David Wright walk-off, Carlos Delgado’s 9 RBI day, or Dave Mlicki’s complete game shutout to start off interleague play. But you could easily slot this win as games five, seven and nine on the list as we’re really talking about three different games here.

The first inning was the first game. Taijuan Walker gave up two home runs on consecutive pitches to Aaron Judge and Anthony Rizzo for a quick 2-0 New York (AL) lead. It had the makings of a long night for Walker, who thrives on the fastball and the splitter while the Yanks lay off good splitters and they hit fastballs a long way if they’re not located perfectly. Walker missed on two fastballs and they were lost. But the Mets had a big first inning, which shouldn’t surprise anyone anymore. Starling Marte slammed a homer off Jordan Montgomery, Pete Alonso tied the game with an RBI double, and Eduardo Escobar (who I still think has a monstrous offensive run in him) hit a two run dinger to give the Mets a 4-2 lead.

The second game was innings two through the top of the 8th, which was basically Walker and Adam Ottavino vs. the Yankees bullpen, who might have like 17 pitchers in it. They were bringing them out from behind the storage closet at Stan’s.) The Mets scored a run in the third when Josh Donaldson’s throw to first hit Francisco Lindor in the head (and unlike the rules of baseball in the 1800’s, that’s not an out.) But Lindor’s eyes got too big for his stomach when he tried to take third on an errant throw in the infield and got caught in a rundown for the third out. The Yankees then scored a run in the fourth as Escobar’s decision to try to get a force on Isiah Kiner-Falefa led to a safe call and then to a run on a fielder’s choice, but Walker navigated out of that by walking Aaron Judge with first base open and then getting Anthony Rizzo to fly out with the bases loaded to end the inning. Walker then got through the sixth with no futher incident to complete another outing where he navigated a tough lineup and got out of it with another quality start. (He might have the best stuff of any pitcher who gets through his starts with “guile”.) While the Yankees’ pen was throwing zeroes, Buck Showalter had Adam Ottavino get five outs before bringing in Edwin Diaz to strike out Joey Gallo, who was pinch hitting for some reason, to end the 8th.

Then came the third game, which started in the bottom of the 8th. With runners on first and second with two outs, Albert Abreu threw a wild pitch to send the runners to second and third. Instead of being careful or outright walking Jeff McNeil with first base open, Aaron Boone let Abreu pitch straight up to McNeil. Abreu threw a cookie to McNeil who cranked it to the outfield for an RBI single to make it 6-3. It wasn’t the highest leverage play of the game, but it did give Diaz a little breathing room for the ninth, which he unexpectedly needed as he got Aaron Judge to tap right to him for what could have been a game ending double play. But what actually happened was something I didn’t have on my dance card:

But Diaz wouldn’t let this turn into an ending from 2019, because 2019 is long in the rear-view. He struck out Anthony Rizzo for the second out, and then did this to Gleyber Torres:

The best part about this win over the Yankees? It wasn’t what it did for the Mets in the standings (not much with the Braves winning.) It wasn’t what it did for “bragging rights” (three more games to go against them.) But it was the fact that this was a big win with an electric atmosphere, and it’s not the Mets’ f***ing World Series. For once, the Mets could sweep the Yankees and the prevailing throught will be “hey, that was very nice but we have a World Series to win”, which is all I’ve ever really wanted.

Actually more of a hate list from the time I’ve missed with you, as I was in Boston for a few days. So let’s start there: