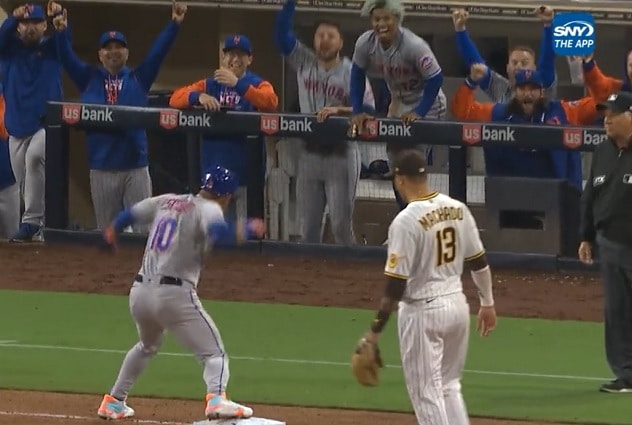 The first inning really set the tone for this game. They worked Blake Snell to the nub and the at-bats by Mark Canha and J.D. Davis were brilliant in working out walks from down 0-2 to force Snell to walk in the first run of the game to make it 1-0. (Davis was playing first base for the first time since he was an Astro and if he keeps raking then it’s going to make this lineup scary and it’s going to write Dom Smith’s ticket out of this organization, but that’s just a side note.) But speaking of a scary lineup, Eduardo Escobar followed that up with a two run single to make the score 3-0, and if he gets going then the rest of the National League had better start diving under tables ’cause Omar’s comin’. (Not Minaya.)

The Mets would stretch their lead to 5-2 while Cookie Carrasco continued his excellence, going seven innings while saving the bullpen a bit in the process. He gave up two runs but struck out ten and … once again of utmost importance … didn’t walk anyone. The Padres bailed him out a few times as they struck out a ton on pitches outside of the strike zone. (Every one of those ten strikeouts was swinging.) But Carrasco’s stuff was confounding and he earned at least a part of every single one of them in his season high 105 pitches.

Escobar gave Carrasco and the Mets some breathing room with a two run HR in the top of the 8th to make it 7-2, and it really gave me visions of really running away with this division if Escobar indeed remained scorching hot. But the baseball gods had to tell me to calm down a little bit as Luke Voit hit a three run HR off Drew Smith in the 8th to make it 7-5, and then Davis decided he wanted to end the inning by catching a flip from the pitcher barehanded in his first game at first base in four years. Okay baseball gods, I’ll do penance. I’ll listen to “Let’s Go Mets Go” and say 100 Ya Gotta Believes. The Mets won’t run away with the N.L. East by the All Star Break.

/crosses fingers behind back

But as has been the Mets habit all season, they immediately get those three runs back and then some as Escobar got his fourth hit of the night. Do you remember when you used to get all those alerts on your phone when somebody was just a triple away from the cycle, and it was super annoying because there were a million of those alerts but nobody would actually get the cycle because nobody hit triples? Well, Escobar needed a triple for the cycle:

EDUARDO ESCOBAR TRIPLES AND HAS HIT FOR THE CYCLE!!!!!! pic.twitter.com/Y5qlDsTQpl

The Mets would get a couple more after that to make it 11-5 (Tomas Nido for crissakes) and give Edwin Diaz the night off after all. To start a series with a win is nice, but to start the series with a seven inning outing from your starter while bleeding the Padres’ bullpen out of five innings sets up really well for the next two games. Remember when the Mets lost two games to the Dodgers and we all panicked? Yeah, those were the days, right? We’re fine. Eduardo Escobar has already been worth the money for his leadership. But now that his offense is catching up to it, we’re going to be in for a really, really fun summer. And if you’re still worried about him, then you just don’t get it.

That’s right, it’s a love list tonight. Because you gotta refresh to be fresh. 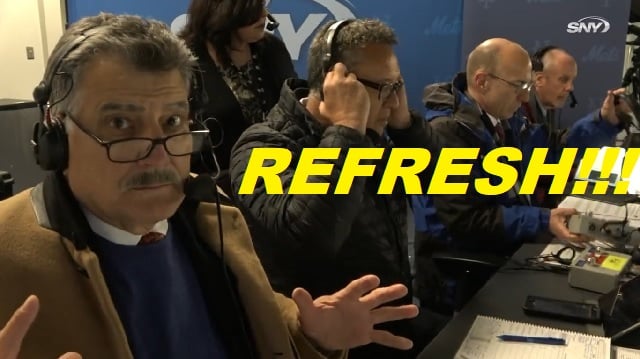 So some of you may remember when I had the Murph-O-Meter, where if Daniel Murphy had a bad game he was “Bad Murph”, if he had a good game he was “Good Murph”, and when Daniel somehow was able to reach both the peak and the valley in the same game, he was “Full Murph”. Well, Keith Hernandez went “Full Murph” tonight. And for Keith it’s not so much a peak and a valley, but it’s more the sublime and absurd.

Early in the game Keith was set up to spread knowledge about how the early day Spaniards laid out the highways in Southern California. It’s just the kind of knowledge that Keith is capable of, which explains why sometimes he admits that he doesn’t know what a Pop Tart is or what PB&J stands for. Because he’s busy learning about important things like the Civil War. He’s Keith Hernandez, after all.

Then later on, Keith had another Pop Tart moment, making the broadcast a glorious “Full Murph”:

It's 11:45pm on the east coast and we've lost all control in the booth 😂 pic.twitter.com/hceBsq4fpU

So when Keith first said “stroking out”, the first thing I thought of was how “stroking out” meant you were having a stroke. So I’m glad that Gare confronted him on it because you knew that it was about to get hilarious. Of course Keith was saying that it was a baseball term, which of course we all knew what he meant, but it didn’t mean we couldn’t stop laughing.

Then Keith went next level:

Gare: “I think you need to watch your language there. Because … we’re getting older, and stroking out is something we don’t want to be doing.”

Keith: “What are you saying I’m a creepy old man?”

Just as Eduardo Escobar needed a triple for the cycle, Keith and Gare needed the triple entendre for immediate entry into the broadcast wing of the Baseball Hall of Fame. And they got it. Congratulations. I can’t wait for Gelbs’ introductory speech in Cooperstown.