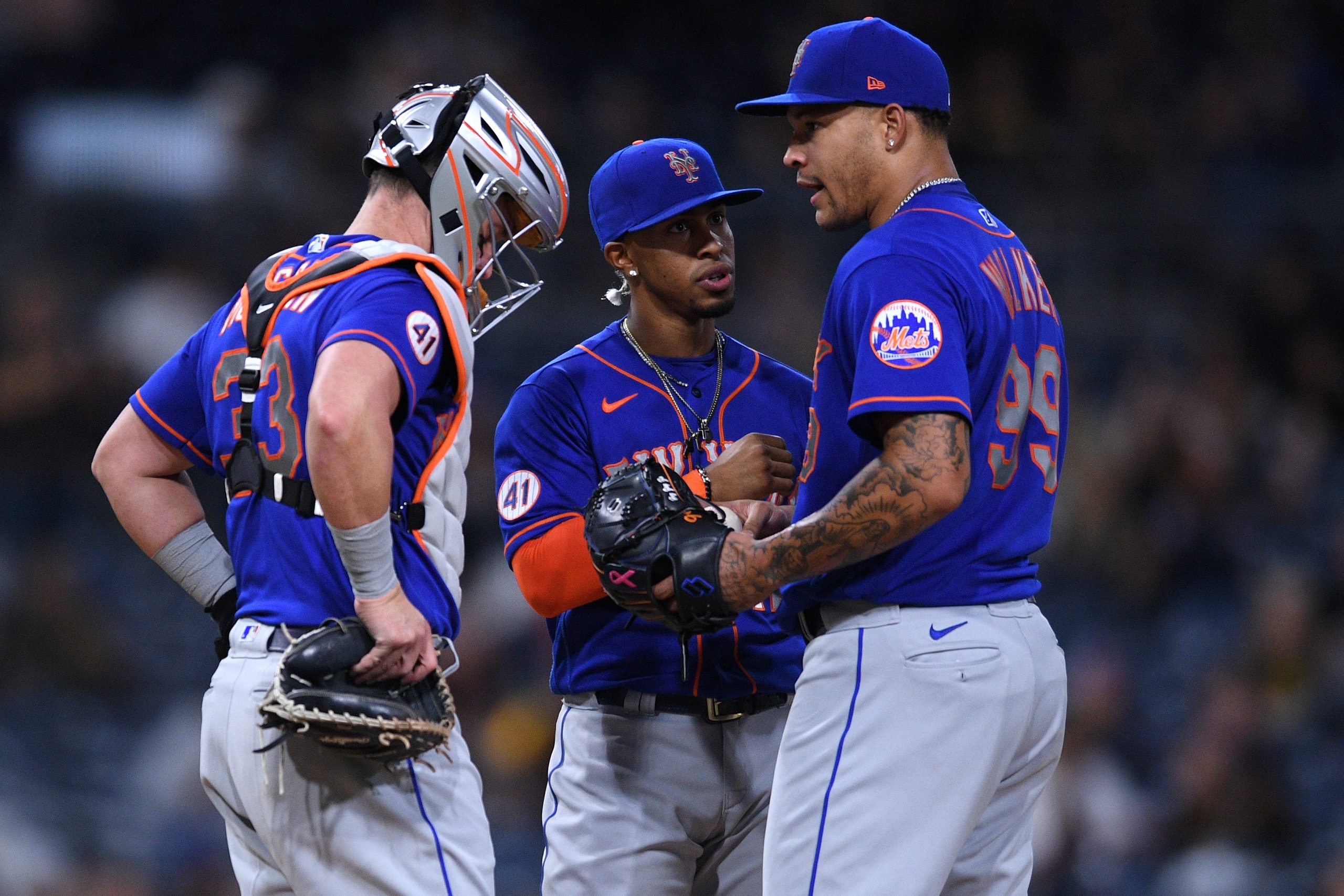 Taijuan Walker didn’t have his best stuff on Thursday. A little less pop, a little less control than we’ve gotten used to him having this season. No worries on that. Nobody not named Jacob deGrom can avoid games like that. But this leads into a decision that Luis Rojas made in the fifth inning that I want to explore a little bit.

All right, so David Peterson spit the bit on Wedensday, taxing the bullpen for eight innings. So fast forward to Thursday night. Down 3-0 (thanks in part to a Fernando Tatis home run which was in and out of Mason Williams’ glove), you have two runners on and two outs with Walker’s spot in the order up in the fifth inning, and Walker is at 81 pitches. So Rojas leaves Walker in to bat for himself. Walker, predictably, ended the inning with an out.

Now, if Rojas is making this move to save the bullpen, then it is inherent upon Rojas to actually save the bullpen. To make passing up on a chance for runs worth it, Walker had to go two more innings. But at 81 pitches in already, and without his best stuff, Walker would have had to have two quick innings to make the move worth it. As it was, Walker worked the fifth, threw 23 pitches to get up to 104, gave up another run on a wild pitch to make it 4-0, and then left the game. Brandon Drury couldn’t field a barehand and made a lousy throw to second to extend the inning, but it just shows you that there are too many variables to depend on getting short innings. To pass up a chance at more runs to save the bullpen one inning didn’t seem worth it to me.

Now to be fair, the Mets are already short on the bench with Jonathan Villar nursing some hamstring issues, and there was no third catcher with Patrick Mazeika going down so you don’t have the flexibility to use him or Nido in that spot. So the only big hitter you have is Pete Alonso, who had a scheduled day off as per the cost of bringing him up without a rehab stint. And Rojas was fortunate enough to find a spot for Alonso to do some damage in the 6th.

After Professional Three Hole Hitter James McCann homered to make it 4-2, Dom Smith was hit by a pitch which chased Yu Darvish, and brought in side-arming leftyTim Hill. Hill then walked Billy McKinney to Bring up Drury. Drury grounded into what should have been a 4-6-3 DP, but the throw to second clanged off Fernando Tatis’ glove to extend the inning, load the bases and bring up Mason Williams.

It was a fortuitous turn of events for Rojas, who now had the second bite of the apple which most managers who wait too long to pull the trigger don’t get. He sent up Alonso for Williams, down by two with the bases loaded, to face Hill who couldn’t be taken out because of the three batter rule. It was a shrewd move by Rojas, even if it arrived in the back seat of the limousine of luck.

Unfortunately, Alonso grounded into the 4-6-3 double play that Drury should have grounded into, and the best chance the Mets were going to get went back in the limo and rode off to the Mission Beach Boardwalk to watch the sun set. But even after all that, the Mets had a chance to pull even in the game. In the 8th Billy McKinney, who is reminding me more and more of Kevin Maas every day, hit one deep down the line in right and a weird carom off the wall for a triple. It would have been an inside the park home run except for this … 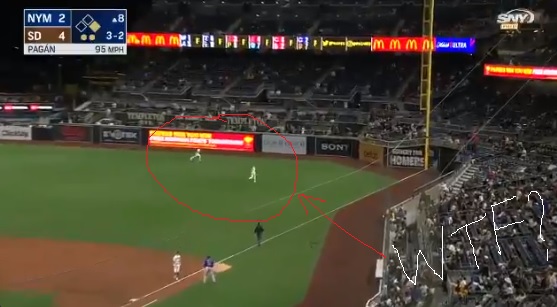 I don’t know, have you ever seen a game where there were two freaking right fielders? I sure as hell haven’t. But of course it would happen in a Mets/Padres game at Turner Field West. Manny Machado, playing back up right field or something stupid, got the ball into the infield quick enough to hold McKinney to a triple, and he was stranded.

The Mets even had a chance to win it in the 9th off Mark Melancon, as he gave up a base hit and a walk to lead off the inning. But Travis Blankenhorn, who has played for so many teams he has his belongings scattered across the country, grounded out to Machado on a fielders choice, and Kevin Pillar scalded one up the middle, but it hit the slope of the mound to give Ha-Seong Kim a room service hop for the second soul-crushing 4-6-3 DP of the night to end the game on the wrong side of a 4-3 score.

Bummer. A home run in and out of a glove, a questionable decision in the fifth, and two f***ing right fielders. Just another evening at Turner Field West, where the Mets have won two series since 2004 (thanks to Ed for the information.) But fear not, we have Cheslor Cuthbert now, because we don’t have enough names like Blankenhorn to confuse Gary Apple on the post game show. I’m just glad Ralph Kiner isn’t around to have to deal with that.