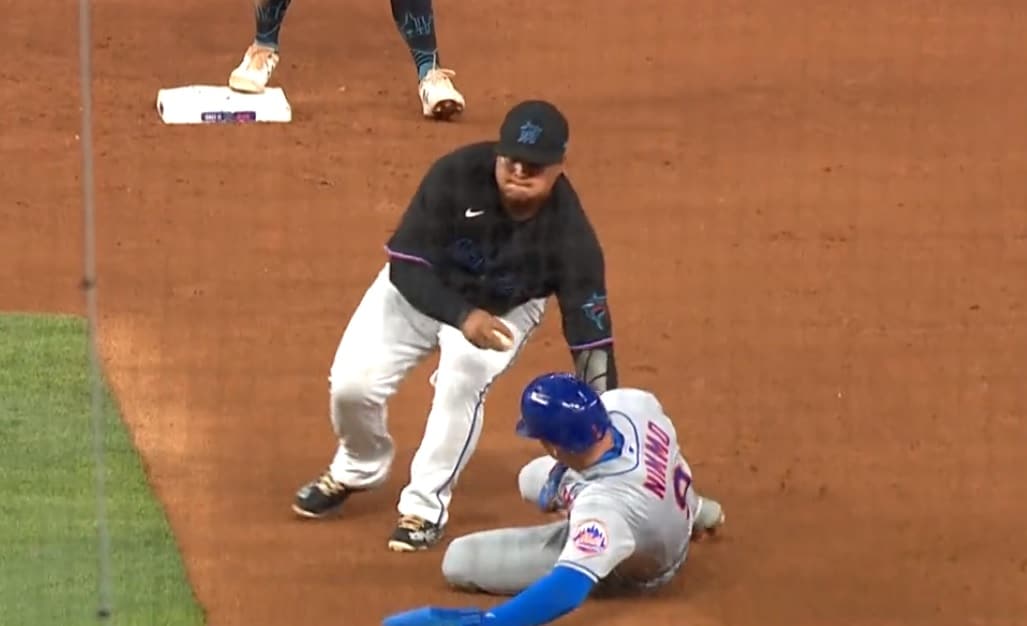 Because I believe context is important, I have to point out first that in the bottom of the fifth inning, Jazz Chisholm was dinged up on a single to right field, as he seemed to have tweaked his back getting out of the box. It set off a chain of events which changed this game for the better for the Mets, for the worse for the disintegrating reputation of Major League Baseball umpires, and for the bizarre for … well, America.

So in Chisholm’s stead comes Willians Astudillo, known as “La Tortuga”. Tortuga means “turtle” so you can see why Don Mattingly tried to pull “The Travis d’Arnaud” …

The Mets tried to find La Tortuga, putting runners on first and second on a Tomas Nido infield hit and a Brandon Nimmo bunt down the third base line. They found La Tortuga on the next play, and it was the biggest play of the game. La Tortuga fielded the slow chopper by Starling Marte, tagged Nimmo with his glove, then threw to first to get Marte for the double play. Three problems: First, La Tortuga had the ball in his hand while he tagged Nimmo with his glove, which as you learn playing little league, isn’t an out. Second, second base umpire Pat Hoberg erroneously called Nimmo out which caused him to give up on the play. And third: Shane Livensparger erroneously called Marte out at first. (By the way, “Livensparger” in Spanish is “Rociador de Vida” which translates back to “Life Sprayer”, which I believe you can buy for your lawn for $99.99 at Costco.

So Buck Showalter who, as you know, knows the rules of the game, challenged both plays. Marte at first was easy. Nimmo at second was subjective, because La Tortuga actually did ask for the ball back and tagged Nimmo out. But the replay center in New York would have to have ruled that Nimmo stopped running because the play was called out by Hoberg and quite frankly, I didn’t think the replay center had the pelotas to make that call. But they did, and they overturned two calls on one play which shows you not only Buck’s understanding of the rulebook but how much Hoberg truly screwed over the Marlins. If he calls safe like he’s supposed to, then Nimmo would have been out at second and the play probably doesn’t even get reviewed. So instead of a double play, or even what it should have been if Hoberg had done his job correctly: first and third with one out, the Marlins had to deal with the bases loaded and nobody out.

It was enough to make even Sandy Alcantara’s life too difficult to overcome, as Francisco Lindor, who homered off Alcantara in the first inning, crushed another ball off the right center field wall to bring home three and make it 5-2. The play got a little dicey as Nimmo and Marte scored one in back of the other, as Joey Cora actually tried to throw up a quick stop sign to hold up Marte, but the throw was off and both runners scored. Even if there was a good throw and disaster had happened, Hoberg would have screwed that up too. Look at this:

I’m floored at how bad an inning these umpires had, and am thankful that the replay center actually righted their wrongs. The umps weren’t much batter the rest of the game, as Paul Emmel’s strike zone was about as consistent as a Tom Brady retirement. (This crew needs to be sent to the minors KBO style.) But the Mets overcame. Adam Ottavino escaped a Drew Smith jam in the 7th after he walked in a run to make it 5-3, as Ottavino threw two sliders to Jesus Aguilar and got him to pop up, then pitched a quick 8th which featured a slick double play started by Luis Guillorme to get the game to Edwin Diaz. Diaz led off the 9th by giving up a hard hit single to Luke Williams, probably the hardest contact off him since mid-May. Then after Jon Berti replaced him on the bases on a fielder’s choice, Berti was thrown out at second on a Hall of Fame throw by Tomas Nido (which, along with a bad decision by Berti, is what it takes to nail Berti on the bases) for the second out. After La Tortuga legged out an infield hit (yes, a turtle legged out an infield hit), Diaz got Jorge Soler on a rope to Lindor for the 6-4 force out to end the game.

The Mets going into Miami and winning the Sandy Alcantara start is a huge bump for this team as they’re in the final stretch of a 24 game stretch where they are currently 11-9, and only have to go 1-3 in their two games against Miami and two games against Houston to reach the magic number of 12-12 to remain 18 games over .500 going into a less tough July stretch that gets them to the All Star break. Meanwhile in Atlanta, the Braves lost to the Dodgers on Freddie Freeman Emotion Night to put the Mets up five games in the division. Don’t print the playoff tickets yet, but maybe start looking at hotel reservations for Milwaukee? San Diego? St. Louis? Los Angeles? Atlanta?

1. Pat Hoberg
2. Shane Life Sprayer
3. Paul Emmel
4. Bruce Dreckman (Who didn’t really do anything wrong except for his presence not making his other umpires better.)
5. Angel Hernandez (I’m sure some of this is his fault.)