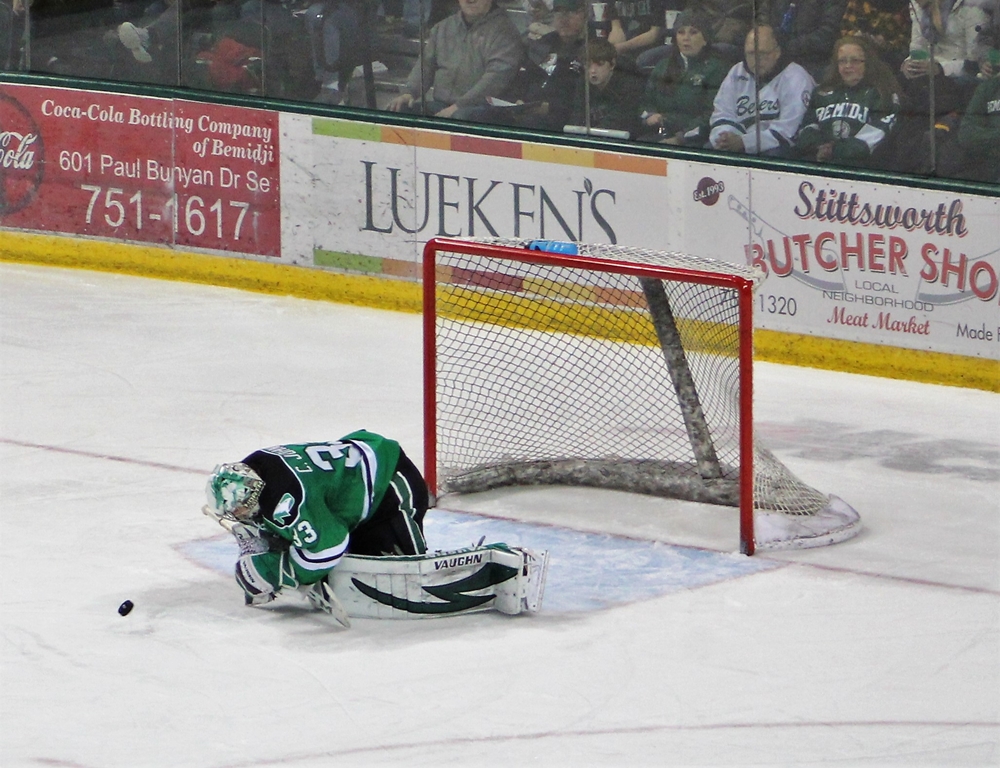 Reading Bruce Ciskie’s blog post this morning, I came across a word I’ve rarely seen used anywhere. So, after watching the University of North Dakota hockey team lose yet another game on Friday night (6-5-2 record), are fans getting frustrated with the current state of affairs? Gauging the post-game reaction on Twitter I would say that it’s getting to the boiling point.

We talked a lot in October about the eight-game run against Minnesota, but there are similarities in the streaks. Just consider how dominant both Minnesota and UND have been consistently against the Bulldogs. And look at the quote in my preview blog from UND senior goalie Cam Johnson.

“We felt every game, they can’t beat us three games in a row, four games in a row,” Johnson said. “There’s no way they beat us five games in a row. They just kept beating us. We couldn’t figure them out. That last game in the playoffs kind of left a sour taste in our mouth. They had our number last year, but we’re going to change that this year.”

See, they’re just as flummoxed as some UMD fans are.

From the obscure statistic’s department, UND has won their eighth national title under the Fighting Hawks nickname, however, since revealing the new logo, UND has yet to beat the Bulldogs.

Obviously, with each Bulldog win, UND fans become  a little more frustrated and a portion of their fan base become more and more insufferable, eventually, that smile will subside from their smug faces. They’re not going to keep winning forever. Also, to quote the former FLOTUS, Michelle Obama, “When they go low, we go high.” I am all for letting them enjoy their brief stint in the spotlight. With a rivalry, you must take the good with the bad.

Finally, I think we need to give credit where credit is due. Also, you have to give some respect to UND’s opponent. During a majority of those seven wins, UMD was the better team.

This might be the year the tournament streak ends. Need a TON of improvement if we want to play in late March/April

Last night, Ollie sent me a tweet and asked if this is finally going to be the year that UND misses the NCAA playoffs. My quick answer, no. While some might disagree with me, I think this year’s team is deeper than last year. At least defensively. Minus the high-end talent, UND has more balance through the forward lines and in their d-core. Injuries have affected their forward line continuity.

Per @BruceCiskie: UMD extended its win streak vs NoDak to 7 with 5-3 win last night. Bulldogs have also won 8 straight vs Minnesota. Two impressive runs right there.

Honestly, I don’t think any of us thought it would get to this point. The losing streak just kind of snowballed on them.

Johnson isn’t the only one that frustrated, following Friday’s game, senior forward Trevor Olson express some of the same sentiments.

“More of the same,” Olson said in the post-game scrum. “Get behind early on, chasing a lead (yet again). We kind of laid an egg there in the second and had to really push in the third. It was more of the same and we’ve got to be better tomorrow.”

Eventually, the Hawks are going to turn the tables on the Bulldogs. They’re going to figure them out and take them to the woodshed. That might happen on Saturday night, it might not happen till next season. Eventually, UND will start another streak against UMD. Right now, the Bulldogs are in the Hawks head. They won’t live there forever.