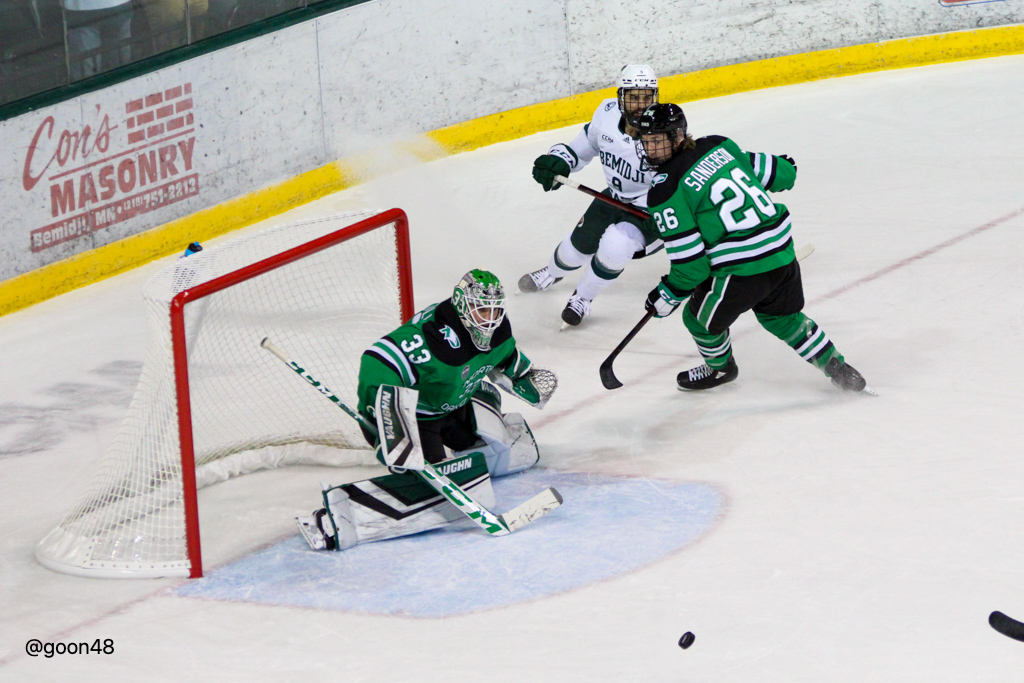 On Saturday afternoon, the University of North Dakota men’s hockey team took on the US Under-18 Team in an exhibition game. In 10 previous matchups, UND had never lost to the U-18 team. On Saturday, the U-18 team finally broke through beating UND 2-0. The game wasn’t as close as the score indicated. The U-18 team took UND to the woodshed.

So far this season, the U-18 team has beaten Michigan State, Notre Dame, Michigan Tech, Boston University, Wisconsin. You can add North Dakota to that list.

Contrary to the fans of other NCHC programs, this isn’t the end of the world. Unlike some other teams in the conference, UND has won five of their last six games.

There is a silver lining. Officially, this game didn’t happen. The loss will not affect UND’s Pairwise Rankings or their overall record. Yes, the coaching staff and the players weren’t happy with the results, but they can use this as a learning opportunity. I think Saturday’s exhibition game could serve as a wake-up call.

This isn’t the first time UND has laid an egg in an exhibition game. During the 2013-14 season, UND lost an exhibition game to the University of British Columbia. UND would advance to the Frozen Four before losing 2-1 to the Minnesota Gophers.

“For the most part, when we have played the USA team, we have been sharp, or sharper, and got the result we wanted,” Berry said. “Tonight we didn’t.”

No Sugar Coating It

During Saturday’s exhibition, UND looked a step slow and at times disorientated. In the post-game press conference, I asked UND forward Gavin Hain if it’s hard getting up for an exhibition game like this?

“It is a mental battle,” Hain said. “Kind of disappointing effort by our guys today, me included. Just being kind of mentally weak and not playing our best. Not really being ready for what they have. So there’s a little bit of a mental battle but we just didn’t do what we needed to do.”

“We know what it takes to bring our A-game and we’ve done it all first half and I think we’re I’m confident in our group that we’re gonna have a good week of practice and we’re gonna be ready to go on on Friday night,” Gaber said.

No Reason to Panic

There’s no reason to panic. UND has played 19 games, UND has a 13-6-0 (.684) record. UND is leading the NCHC with 24 points. They’re six points clear of second-place Western Michigan. Looking at the Pairwise Rankings, UND currently sits in 4th. UND is set up well for a second half run.