When Nothing Turns Into Everything 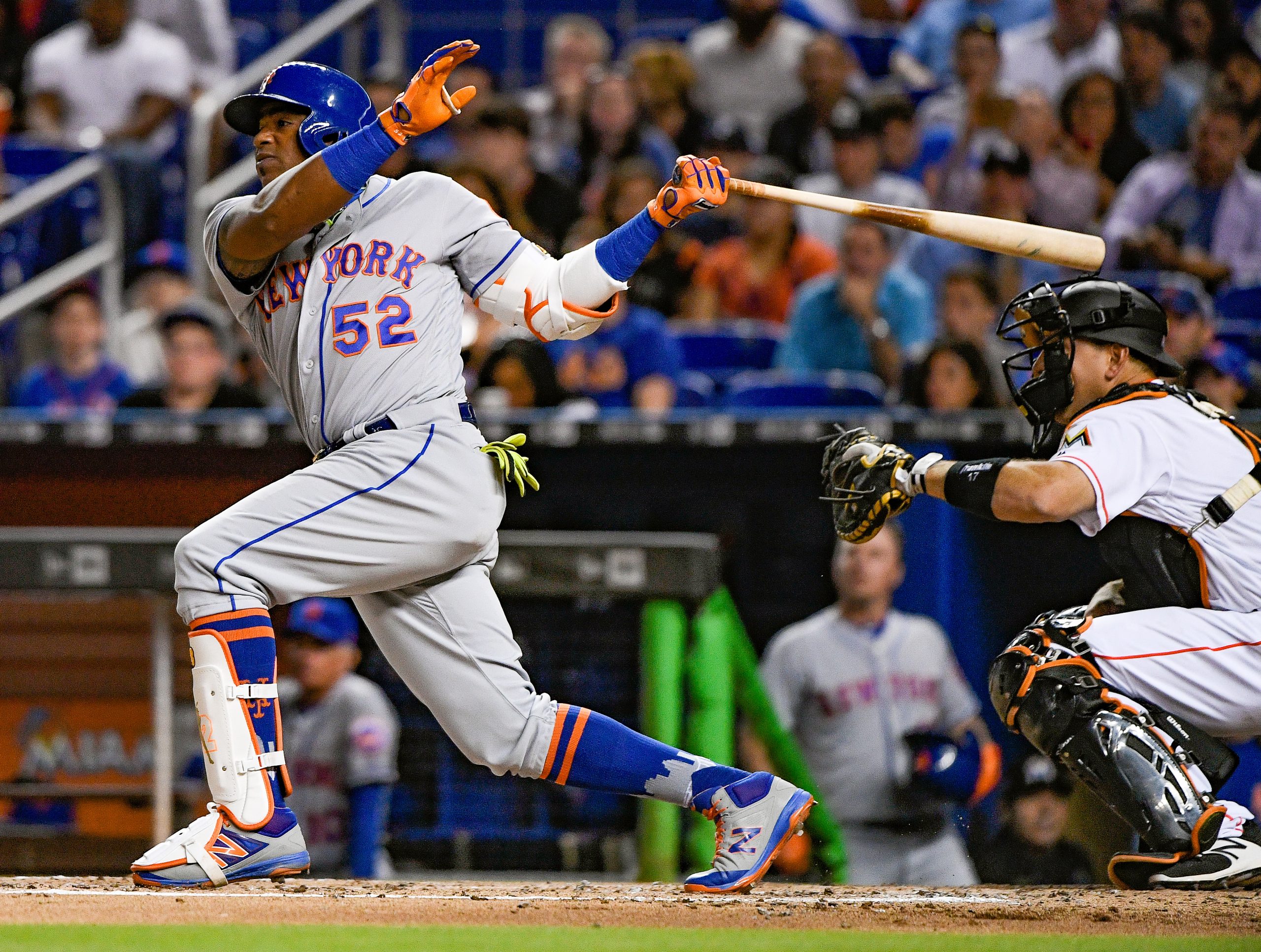 You never know when these kind of games are going to come. They’re the games that test your resolve whether you felt you deserve to win or not. As the game got to a certain point, it was apparent that the Mets had no business winning this game. But we’ll get to that.

The Marlins started out gangbusters against Robert Gsellman as Marcell Ozuna hit a laser beam for a grand slam to give the Mets a quick 4-0 lead. But in the top of the second the Mets came right back with a three run triple by Travis d’Arnaud (one of those RBI created by Jay Bruce bunting against the shift, which I bring up because it was awesome and shouldn’t be lost to history … you might even call it “the Mother Of All Bunts”) and an RBI single by Curtis Granderson to tie the game right back up at four. Then after Yoenis Cespedes smacked a monster, Wilmer Flores followed up with a home run of his own, then Cespedes hit another laser, the Mets had a 7-4 lead in the fifth. But Gsellman didn’t have it, and was taken out after a pitch down the middle was just missed by Giancarlo Stanton and became a sac fly instead of a home run that would have broken the glass in the outfield if he had hit it right. Then Josh Edgin came in and gave up a couple more runs, only saved by a Jay Bruce outfield assist, and the Marlins took an 8-7 lead.

Jay Bruce drove home Yoenis Cespedes with the tying run in the seventh, but replay decided that Angel Hernandez stinks at his job and reversed the call to out. Cespedes, for all that his right with him, really should think about not having anything in his back pockets because the play was that close and that made the difference (well that and Cespedes went to the Jeremy Giambi school of not sliding, and Neil Walker spent his time in the on-deck circle thinking about marinara French fries instead of telling Cespedes to slide.) But Michael Conforto would come in to the game for Granderson and would tie the game in the eighth on a pinch hit triple. I guess it would be an appropriate time to say that I think Terry Collins should try to get this young man into the lineup every so often, no?

Then as the game wound into extra innings, I found myself on a bus going home. Now I’m sorry for the tangent here but I have to make a complaint about this city, because if it’s something they don’t realize it’s that people who travel late like to go home just as much as people who work human hours. But they think that because there’s less of us than of them, that we don’t matter. Now if there’s a night to sit in traffic, it was tonight. It’s not the worst thing in the world to have Howie and Josh in your ear for five innings while you’re on a bus. But here’s something to think about if you’re the city of New York: If you’re doing work on the 59th St. Bridge and traffic is backed up there, then maybe it’s not the best idea to also close a lane to the Queens Midtown Tunnel on the same night. That’s like putting an extreme shift on Jay Bruce to pull the ball while throwing him fastballs away. It’s really dumb and there’s no reason to do work on both pathways to Queens at once.

But again, it wasn’t the worst thing in the world to hear Howie Rose freak out because Billy The Marlin was starting to look delicious in the 12th inning while Josh Lewin told a harrowing story about leftover cherry juice. Throw in some expert trolling regarding Fredbird and you have an excellent radio broadcast.

So the game trudges into the 15th and the Mets got great relief pitching from Fernando Salas, Addison Reed, and Josh Smoker. But all that was left was Hansel Robles to pitch his fourth straight day. And even just from listening you could tell that Robles had nothing. But with Miguel Rojas on first base and Robles having trouble finding the plate, J.T. Riddle saved the Mets by bunting at ball four and sacrificing Rojas to second. So instead of first and second with nobody out, Robles got a free out and he retired Gordon and A.J. Ellis (who Marlins fans should be screaming about hitting second) to end the threat. That was great escape number one.

The Marlins then brought in Friday’s starter Adam Conley, who up until now had a spell going against the Mets. But d’Arnaud smacked a go-ahead home run on the second pitch he saw to give the Mets a 9-8 lead. It was up to Robles to get three more outs on his fourth straight outing. He still had nothing. But after walking Team USA hero Christian Yelich, Robles retired Stanton, Justin Bour, and Ozuna on a pitch I thought was going to fly over the center field wall. Robles somehow escaped with his life in an outing I give him full marks for as the Mets limped over the finish line for a win they had no business taking home. But take it home they did. Not even the Rally Cat could save the day for the Marlins. But let’s not forget about this win months down the line just because it happened in April. Because this was a fantastic victory over a team that gives the Mets fits in that lime green ballpark. Now the Mets come back with Syndergaard on Friday as the Marlins lose Met killer Conley. As long as Derek Jeter doesn’t buy the team over the weekend, the Mets should be in good shape after a game they had no business winning.