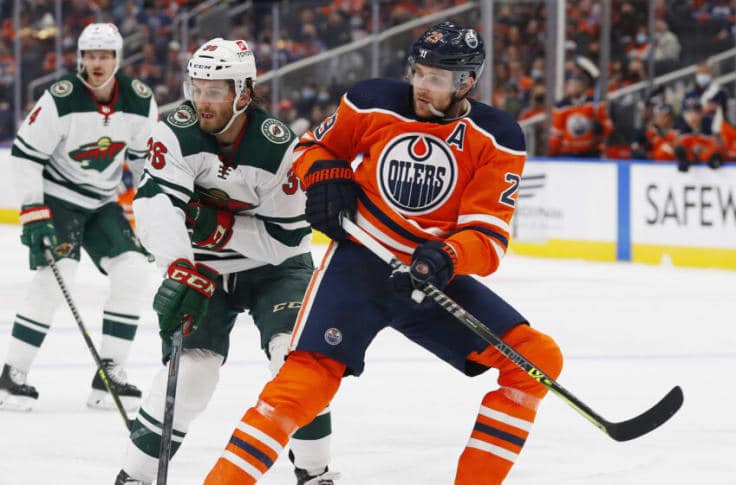 It’s not about how you start but how you finish is a common cliche used in sports.  I’m not entirely sure that applies to what was a bit of a roller coaster of a week for the Minnesota Wild where they went 2-2 with wins over the Detroit Red Wings and Edmonton Oilers but ugly losses to Winnipeg and Florida.

So its a wash.

In the losses, the effort was uninspired and Minnesota did not show a lot of compete for loose pucks and mistakes made in their own zone ended up in the back of their own net.  Jordie Benn personified these struggles by falling over flat onto his back in the game against the Florida Panthers which ended up in a 6-2 rout.

Florida is one of the best teams in the league, but the Wild were careless with the puck and the game prompted the club to reassess its game before it went on a Canadian road trip that continues this week.

Simply looking at the score of Minnesota’s game against Edmonton, a 7-3 rout of the Oilers would suggest the Wild got the message.  Or did they?

Minnesota scored on 4 of its first 5 shots in the game.  I think if I was playing NHL ’22 on my Playstation 5, the Oilers had their goalies set to ‘rookie’ mode where just about any shot the Wild took found the back of their net.  It was truly an ugly performance for Mike Smith and Mikko Koskinen.  At times the Wild were still guilty of being a bit nonchalant with the puck and Edmonton didn’t make Minnesota pay for their mistakes the way Florida and Winnipeg did.

That sloppiness could be seen the Oilers’ goal scored late in the 3rd period by Zach Hyman.  High risk, low-reward plays with the puck and finally Edmonton made Minnesota pay the price for it’s lack of focus.

Truth is, the Wild have not fared well against the better teams in the league.  And to be clear, by better we mean teams that are likely to make the playoffs this season.  Earning a victory over Carolina last week was great, but they need more of them if they want to convince anyone that this team is anything other than a one-and-done playoff qualifying club.

Like Wild General Manager Bill Guerin said at the beginning of the season, its about winning.  However its also about how you play to make that possible.  Early on, the team embraced a different hero every night and solid team defense got Minnesota out to a fast start.

Since the arrival of Matt Boldy, the score-by-committee approach has transitioned to being more of a two-line club led by the combination of Kirill Kaprizov and Mats Zuccarello as well as Boldy and Kevin Fiala.  Secondary scoring has been harder to come by and some players that got off to great starts early in the season have turned ice cold (cough Ryan Hartman cough Marcus Foligno).

Did some of those overachievers ease up a bit with some of that pressure to contribute offensively being taken off of their collective shoulders?  Or did they read all of the early praise and get a bit complacent?  Perhaps a little of both.

Wild Head Coach Dean Evason looked to shake things up a little by benching Jordie Benn in favor of Calen Addison as well as making Nico Sturm a healthy scratch in favor of Nick Bjugstad.  I thought the Wild’s newly constituted 4th line of Bjugstad, Connor Dewar and Brandon Duhaime looked better and Addison certainly seemed to be an upgrade over the gaffe prone Benn.

Sunday’s victory wasn’t their best game but it certainly was a better effort then they had against the Jets and Panthers.

What did you think of the Minnesota Wild’s slate of games this week?  Tell us on Twitter at @CreaseAndAssist!

Iowa Wild’s struggles mirror that of the big club

A guy I coached football with had our players learn about the idea of the man in the mirror.  It is a concept where the one person you have to truly be accountable to is yourself and can you look back at yourself (as though looking at a mirror) and feel as though you did everything you could.

I wonder what players on both the Minnesota and Iowa Wild clubs would be thinking right now after this week’s slate of games.  For the Iowa Wild, holding a 3rd period lead has become a major issue.  Iowa has lost 7 games they have led going into the 3rd period this season.

Too often the team sits back and simply tries to defend the lead, which invites their opponent to go on the attack and Iowa simply doesn’t play ‘rope-a-dope’ nearly good enough to be successful with that strategy.

While I am sure Wild Head Coach Tim Army probably talks with his team about being ‘smart’ with the puck, I doubt he is telling his team to sit back in a defensive shell and rarely skate across the red line.  At least I hope not.

On Saturday, the Wild held a 3-2 lead against the Chicago Wolves going into the 3rd period.  Iowa was content chipping pucks out of their zone and trying to keep their shifts short, and there was no attempt to make Chicago defend at all.

Chicago takes full advantage of this passive approach they tie the game, then take the lead a few minutes later and that was all she wrote in a 5-3 loss.  After the game, a closed-door meeting was held to talk to the team about the need for more effort and attention to detail in the defensive zone when trying to defend a lead.

If this was an isolated incident you could dismiss it, but instead its becoming a disturbing trend.

Victor Rask cleared waivers and should be joining the team next week.  It will be intriguing to see how Rask handles the demotion and whether he can provide some offensive spark to a club whose offense has gone somewhat stale.

Marco Rossi is still leading the team in scoring and while that has a lot of Wild fans petitioning on Twitter and other places for his promotion, I still don’t think he’s ready.  Here’s why.

He is far more noticeable on the power play than he is at even strength where he gets the time and space to be more effective.  At even strength and in puck battles along the boards he often gets manhandled.

I have noticed that he’s getting less involved in battles for the puck in the corners and now has been more of a cherry picker who tries to move in and sweep away the puck while his teammates do most of the dirty work.

Defensively, his level of effort isn’t nearly the same as it is in the offensive zone.  He does come back to help out defensively somewhat, but rarely is he hustling back Mats Zuccarello-style like he did in major junior.  I wonder if some of that is his own understanding that he lacks the strength to win the puck back like he did at that lower level.

Sure folks, its been fun to watch Matt Boldy with Minnesota.  Yet we have to accept the fact Boldy has a maturity level, physically and perhaps mentally that Rossi hasn’t developed just yet.  Boldy looks like he’s a player that has competed against men and has the strength and the confidence to engage in battles for the puck.

Rossi, in my opinion looks like a player who is avoiding those battles on the ice he knows he will struggle with.  Feel free to disagree with me, but that’s just how I see it.

Brandon Baddock made his Iowa Wild debut since being acquired in a trade with Montreal.  He’s a bigger player who certainly likes to finish his checks, but he doesn’t appear to do much more than that.

Mason Shaw, Mitchell Chaffee and Dakota Mermis have been Iowa’s best three players the last few games in terms of effort and production on the ice.  Chaffee has shown excellent since returning from an early season injury with 11 goals, 19 points and is a +10 in 22 games to me is putting himself in that conversation as a player who is worthy of a call up if Minnesota is looking for some help at forward.

LW / C – Pavel Novak (Kelowna, WHL) ~ Novak is the top scorer for the Rockets added to his total with an assist on 2 shots and went 4-for-6 on his draws in Kelowna’s 3-2 victory over Prince George on Friday.  A native of Tabor, Czechia, he had another assist on 1 shot and went 9-for-14 on his draws in another 3-2 victory over the Cougars on Saturday.  Kelowna’s alternate captain has 22 goals, 32 assists, 54 points, 8 PIM’s and is a +23 in 41 games.

LW – Nikita Nesterenko (Boston College, H-East) ~ So far, his sophomore year hasn’t stood out quite like his freshman year for the Brooklyn, New York-native.  He had an assist in the Eagles’ 4-1 victory over Northeastern.  Nesterenko has 5 goals, 16 assists, 21 points, 35 PIM’s and is +6 in 30 games.