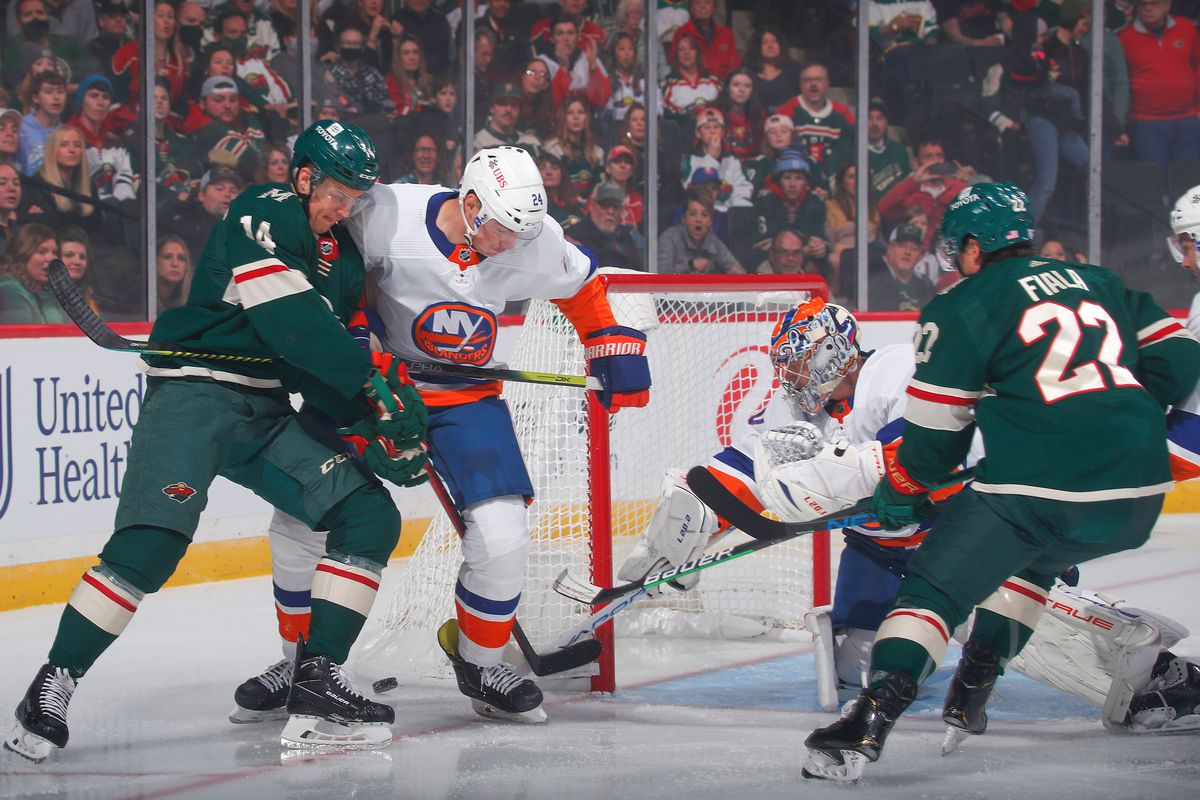 With the way this season has gone, we’ve had postponed games for a several reasons. Of course, most of those reasons have been Covid related this season. Mind you, they’ve not been the Wild’s Covid issues. Either the opposition hasn’t had enough players for a game, or a team isn’t allowed to have fans in the building. However, we haven’t had any weather delays for games in the league this season. With the storm that was heading towards the East Coast, I’ll admit I was worried that a team was going to have to add “postponed due to weather” to the list. Thankfully, that was not the situation. I suppose that’s a great reason for teams flying in early for games if at all possible.

At least weather wasn’t going to be a possibility for another postponed game. I really appreciate when the schedule has the New York Rangers and New York Islanders (and possibly the New Jersey Devils), all clumped up together on one road trip. One flight into New York and then a bus ride out to Long Island. But the upcoming schedule doesn’t make much sense. February is a dumpster fire when it comes to logistics. However, one must remember those games weren’t supposed to be there at all. There’s a week that seriously has the Wild bouncing from Edmonton, to Ottawa, to Toronto, and then Calgary. Hooray for Frequent Flyer miles!

Friday night’s win at Madison Square Garden was a statement win for Minnesota. But we cannot ignore the fact that the Wild again went down 2-0 before the first intermission. Luckily for the Wild, those would be the only goals scored by the Rangers. When Chris Kreider scored, I only had to remember that I noted him as a threat when I wrote that preview. I don’t know if it was a self-fulfilling prophecy or if it just happens more often than not. Yet again though, the Minnesota Wild proved that going down two goals isn’t as concerning for them than it would be for other teams. But do we really need to keep putting ourselves in a deficit game after game?

Tonight is another one of those trap games. In fact, with the exception of Carolina, Florida, and Toronto, the entire month of February is one big trap. But if you needed a demonstration of what a trap team looks like, the Islanders are just that. And I hope the Wild realize it. I will say though, it feels like Minnesota is doing a better job this season against teams like the Islanders. Although that second game against Chicago was scarier than it needed to be. Hopefully Minnesota comes out and plays the Islanders like they mean business.

Looking at the Islanders’ scoring, there’s really nothing there that truly stands out. In years past, Matt Barzal and Brock Nelson would have had much better numbers. But that is not the case this season. In reality, they look like middle of the pack players. It’s that drop off of scoring that has doomed the Islanders this season, and that’s sad for the team. I’m sure many fans were looking forward to a great season in their new home, but that’s no really happening this season.

If you want to know what is going “right” for the Islanders, you only need to look at their goaltending. For several seasons now, Semyon Varlamov has been carrying the Islanders and putting up fantastic numbers. It appears however, that the torch has been passed. Or at the very least, is starting to be passed on to the next generation. To clarify this, just take a look at the shutout numbers across the league. Sitting tied for second place, with four shutouts, is Islanders goaltender Ilya Sorokin. He’s tied with Toronto’s Jack Campbell. Sitting in first place with this stat, is Calgary’s Jacob Markstrom who has an unbelievable seven shutouts.

And it’s not just Sorokin’s shutout numbers that should have the Wild (and other teams) concerned, but his other stats look good too. While his individual stats looks good, he’s not getting the offensive support from his skaters. In fact, neither goaltender is getting the support they need. While the Islanders have a great goals against per game (5th in the league), they’re definitely not scoring enough to give their goaltender the needed breathing room. Nor are they generating enough to get them more wins. If you need a better illustration (and a laugh), Marcus Foligno would be the Islanders top points scorer.

When the Wild have games like this, I worry. There are so many aspects that can work against them, but I never know if they’ll find ways to overcome the obstacles. Train wrecks happen with this team early in the game, but then they find some way to right the ship. I don’t know about you, but for once I’d rather this team didn’t have to right the ship so often.