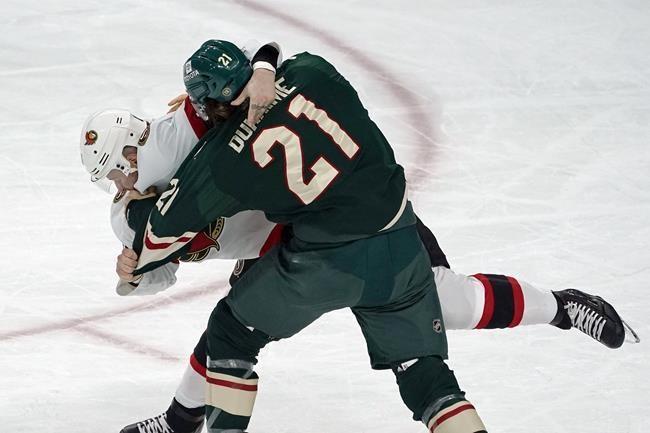 I don’t know about you, but even though it’s still early in the day, it feels like I have been putting the right thoughts out into the universe. When I wrote the preview for Sunday’s game in Edmonton, I called out very specific players for their current play. Most notably, I called out Kevin Fiala. So much so, that it kind of makes it you wonder if somehow my words make it into the ears that need to hear them. Trust me, I am under no illusions that anyone within the Wild organization reads my ramblings, but the coincidence game was strong. But then, if I’m having these thoughts to call the out so strongly, you can pretty much guarantee the the coaches are even more direct. I’ll just go with the idea that somehow my written words were metaphysically put out into the universe and Fiala received them somehow.

However, I still have concerns. One good game does not complete erase Fiala, among the play of others. Ryan Hartman is still absent from the all important goal column. While he did tally the lone assist on the Mats Zuccarello goal, it’s not enough. Yes it was good to see, but we need to see more of the Hartman we saw prior to the Covid mess creating havoc with the schedule. But in general, Sunday’s game was a game I was happy to see. The opening three goals by the Wild within about three minutes, was a change that we needed to see. Those three goals felt a bit like they channeled their anger and frustration from recent outcomes, and turned it into something positive. And that my friends, is what we need to see more.

While we might be feeling a bit more positive about things, we again need to temper our responses. Yes it was a Western Conference win, but it was a win against Edmonton. I don’t know about you, but a Wild win against the Oilers, played in Edmonton, isn’t as hard to come by these days. Even with their high scoring roster, it’s not that difficult to get a win on them. They’ve been an organization in disarray for a long time, and I don’t know if they’ll ever figure things out. As much as it would hurt them on many levels, they are an organization that needs to blow everything up, roster included. And yes, that includes Connor McDavid.

Tonight, Minnesota is heading into another arena with another Canadian team. But this one is in an even bigger mess. No, not the Toronto Maple Leafs, but even worse. I don’t know what it is about the Canadian teams, but they just can’t seem to figure things out. I would wager a guess that it has a lot to do with professional sports in general being an “old boys club” but the NHL tends to take that to an extreme. And if the NHL isn’t one large clique, the Canadian teams seem to be even more insular. Amongst the Canadian teams, you see the same names over and over again within the leadership ranks, and you’re left wondering why they can’t see that they’re the problem. Although, Edmonton is probably the most guilty with this trend, with Ottawa and Toronto not far behind.

When I was typing up the stats for the preview, I had a bit of a chuckle while looking at the numbers. And in particular offensive numbers. In particular, the Ottawa Senators are currently putting up 2.63 Goals For per Game. Before and even just after the 2004-05 lockout, a team putting up that many goals would have been sitting somewhere in the top of the league. However, their current goals for, puts them in 26th place in the entire league. And with that in mind, at the same time a Minnesota Wild fan (and probably the entire league) would have been beyond shocked to see them tallying 3.81 Goals For per Game. And in particular, a team coached by Jacques Lemaire. Which of course begs the question, what would Lemaire do with this team? Of course Minnesota’s defensive numbers would be better, and I wouldn’t mind seeing that.

Again, tonight is a must win and should win. Considering the struggles we’ve seen the Wild have against Western Conference opponents, they absolutely need to pad the stats with these Eastern Conference games. The next two months are going to be heavily Western Conference, so grab the points while you can. This is a team, where you should be able to hit them while they’re already down. About the only stat where the Senators are mildly successful is penalty kill. However since they’re middle of the pack, it’s still a chance for Minnesota to improve their power play. And speaking of penalty kill, it was nice to see the Wild only take two penalties in Edmonton. But their sluggish at times penalty kill allowed an Evander Kane goal.

So let’s all put out the positive vibes for the Wild. Make sure you also use your telepathic skills to encourage Fiala, Hartman, and Marcus Foligno to ever remain or get back into the scoring column. And getting some help from some of the less likely to score would only help. As we head into the toughest part of the season, this is where we need everyone to contribute, and contribute regularly.