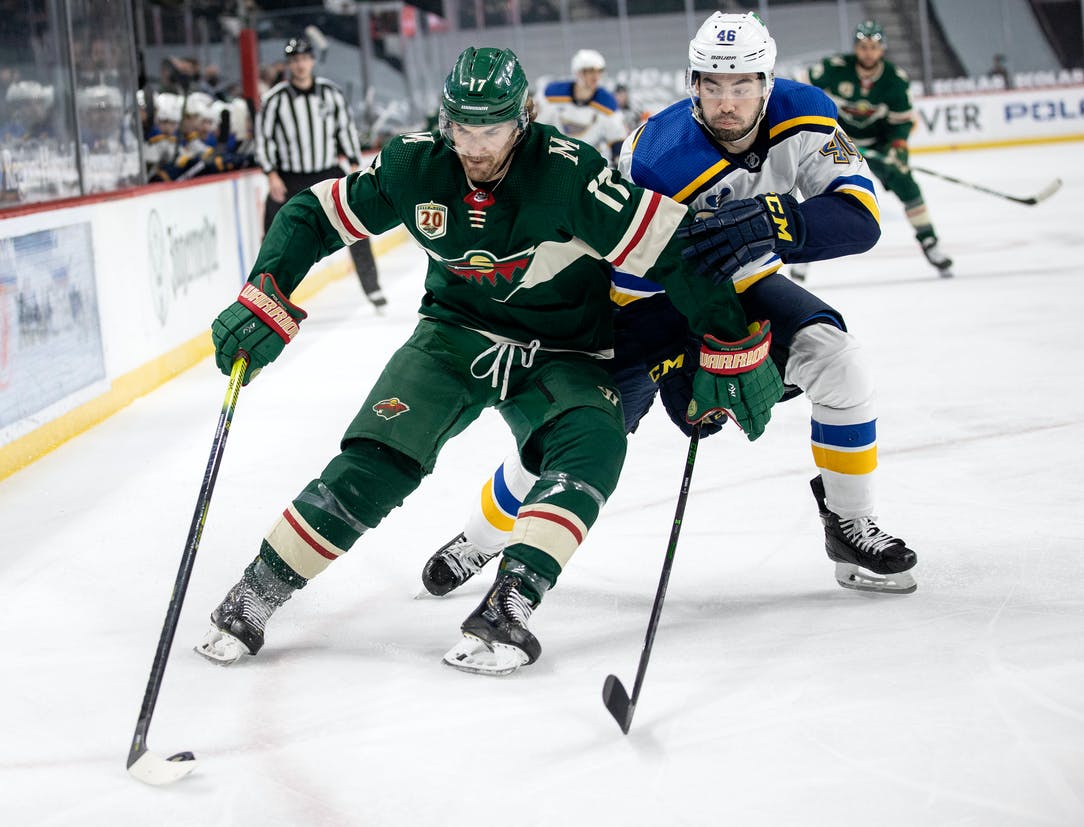 *- Denotes statistics include those earned from multiple teams

While looking at what remains of the regular season, it is games like today which should give you pause. There is so much that could go right, but then so much could go wrong as well. This afternoon’s game is of the dreaded 4-point swing variety, but there’s no stress right? Personally, I hate the last month of the regular season, and the last two weeks specifically. This season seems almost worse, because it feels like we see nothing but teams in our division and in playoff fights of their own. However, if I actually look at the schedule, after today there are only two more divisional games. But seeing both Nashville and Colorado in the last week is not a comforting thought.

Right now, Minnesota wins the tie-breaker for the second spot in the Central Division against today’s opponent, the Saint Louis Blues. As I’ve mentioned in previous previews, Minnesota “wins” the games-in-hand award. I honestly don’t know when the Wild will even out when it comes to games played, but they really need to take advantage of that fact for as long as they can by continuing to win.

Also, the Wild currently hold onto the second place spot in the division by their record. The Wild are 46-21-6, but the Blues are 44-20-10. However, we need to dig a little further into that record. While Minnesota has fewer games played (the superior points percentage), the Blues would win the tie-breaker if it comes to that. The Minnesota Wild have become known as a team that can rally and tie a game late in regulation. That’s great and all, but it’s a detriment when it comes the tie-breaker. Regulation wins is ultimately the first tie-breaker, because eventually all teams will have played 82 games. Right now, Minnesota has 33 regulation wins compared to the 40 regulation wins by Saint Louis.

So yes, it is games like today’s that are so important. Not only is it a 4-point swing game, but it has definite implications in the tie-breaker. While a “win is a win”, today is not a day where an overtime or shootout win is the ultimate goal. I would imagine the Blues are thinking very much the same as well, but we can’t worry about their feelings or how they play. Minnesota needs to focus on their own games and the areas they need to address. But I that has me worried as well.

If ever there was a game for Minnesota to avoid a special teams trial by fire, this would be the game. The Blues have both an excellent power play and penalty kill. We all know Minnesota’s struggles with their special teams, but especially their penalty kill. Because of that alone, I worry that the Blues will take a page out of Nashville’s playbook, by goading the Wild into pointless fights. But at this point, I’m just glad that the National Hockey League doesn’t have the same rules as the American Hockey league when it comes to fights. In the AHL, if an individual player has three fights in a game, they’re ejected. And then after you’ve had 9 or 10 fights in the season, you’re suspended.

Minnesota can’t even really rely on their phenomenal goal scoring ability. Because if you look at the stats, the Blues just slightly better. They’re also better at overall team defense. I don’t know about you, but this is a game to keep things simple. In Thursday’s game in Dallas, while it was ultimately a win, there were too many times where the Wild were trying to be fancy. Yes, when you have players like Kirill Kaprizov, Mats Zuccarello, and Kevin Fiala, it’s easy to fall into the “fancy trap”, but ultimately this is not a fancy team. This is probably the most rounded team we’ve ever had, but it’s the talent that that makes them think they can get away with the drop passes at the worst possible time.

Both teams currently are on winning streaks, but I’ll give you one guess as to who has the better streak. In their last ten games, Minnesota is 7-1-2, and is on a three-game winning streak. However, Saint Louis has an impressive 9-0-1 record, and is on a seven-game winning streak. If ever there was a time to snap an opponents win streak, this would be the perfect time. I don’t know about you, but Saint Louis has become a team I love to hate. And today is the perfect game to show them just how much I don’t want them to win.

If Minnesota can beat the Stars in Dallas, I would like to think they can beat the Blues in Saint Louis. I just worry that they’ll do everything possible to lose the game, at a time in the season where stupid mistakes are amplified tenfold. Focus on your own game and keep things simple needs to be the mantra in the locker room. Whether that is the case, is entirely up to them.