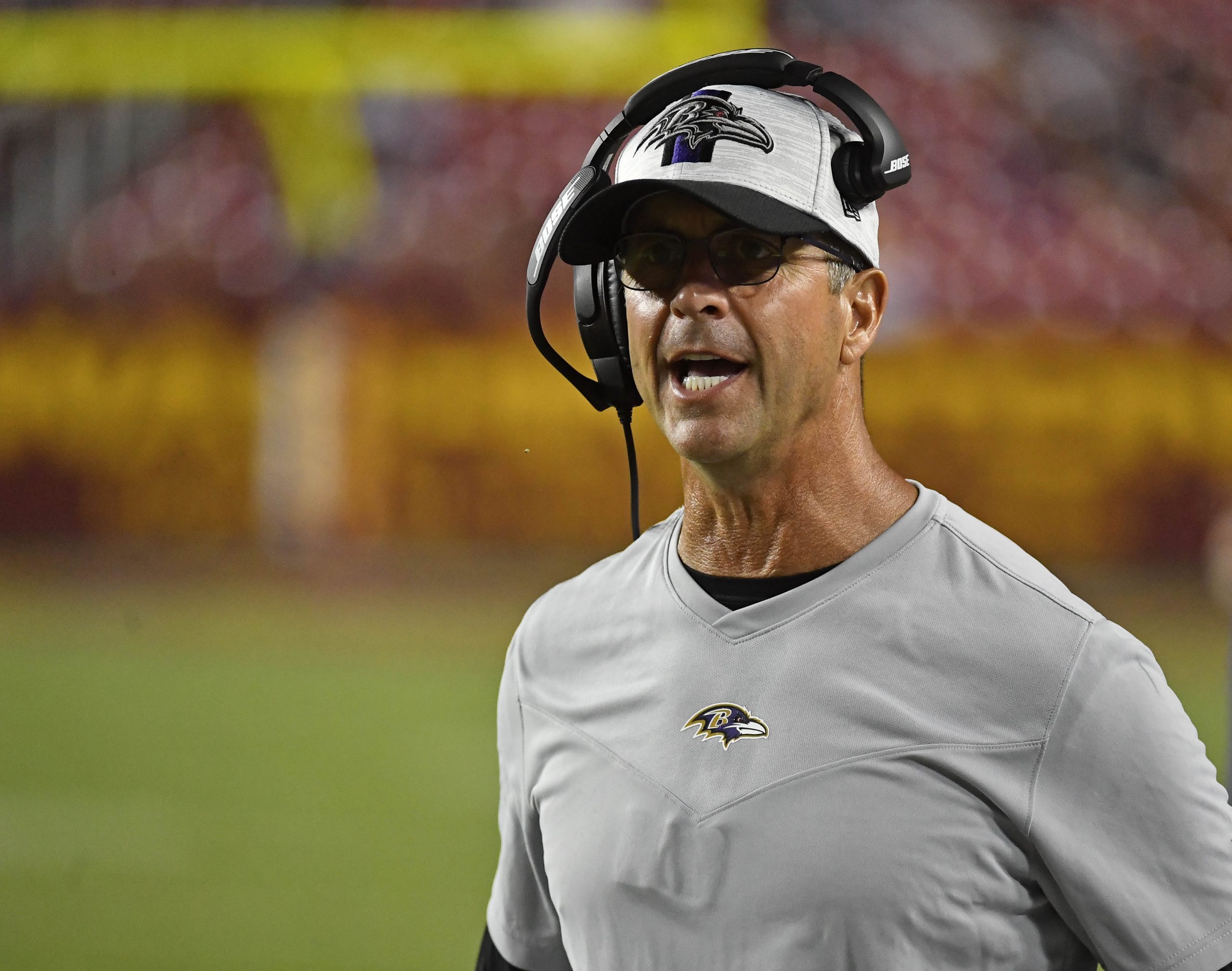 The Ravens had their first practice of training camp Wednesday in front of fans at the Under Armour Performance Center, who were eager to see the team take the field. There wasn’t much 11-on-11 work during a practice that featured plenty of walkthrough work and individual drills. The Ravens plan to ramp up gradually, hoping to decrease the number of injuries which have plagued them the past two seasons.

Now in his 15th season as coach of the Baltimore Ravens, John Harbaugh understands the need to keep the message fresh.

“The principles are still the same, but we present them differently,” he said. “The way you say it, the words you use, you try to apply it to the guys at hand and the situation we’re facing. … We have a T-shirt. I don’t know, I thought of it a couple weeks ago for whatever reason, and it’s our first T-shirt. It’s, ‘Come to work ready to go to work.’”

The Ravens have extra reason to be motivated after only their second losing season of Harbaugh’s tenure. They overcame a slew of injuries for a while before dropping their final six games to finish 8-9.

“Shocking,” guard Kevin Zeitler said. “Being where we were after Week 11, Week 12? And just how it went, but also being in every single game no matter what happened. I mean, there’s a million things that happened. You can’t make an excuse. You can’t just expect things to change either, because everyone’s healthy. We’ve got to put the work in.”

Everyone isn’t healthy just yet. Running backs J.K. Dobbins and Gus Edwards and cornerback Marcus Peters — all of whom missed last season because of knee injuries — are on the physically-unable-to-perform list. So are tackle Ronnie Stanley, linebacker Tyus Bowser and safety Ar’Darius Washington.

Star quarterback Lamar Jackson, who is still without a contract beyond this season, was at practice. He missed the start of camp last season because of a positive covid-19 test. That didn’t seem to be much of a setback when he played well at the beginning of the season, but Jackson also was hit by the injury bug when an ankle problem kept him out the final four games.

Jackson won’t have one of his top receiving targets from last year after the Ravens traded Marquise Brown during the offseason. Second-year receiver Rashod Bateman, a first-round draft pick in 2021, has a chance to play a bigger role. Bateman also missed time at the beginning of last season because of groin problems, but he caught 46 passes in 12 games.

The Ravens didn’t make any major additions at receiver after the departures of Brown and Sammy Watkins.

“It shows that the coaches trust us, trust our abilities, trust our work, and they trust what we’ve done and what they’ve seen,” Bateman said. “We definitely look forward to showcasing that.”

Here are some Day 1 observations from Clifton Brown of the Ravens PR staff who attended practice: