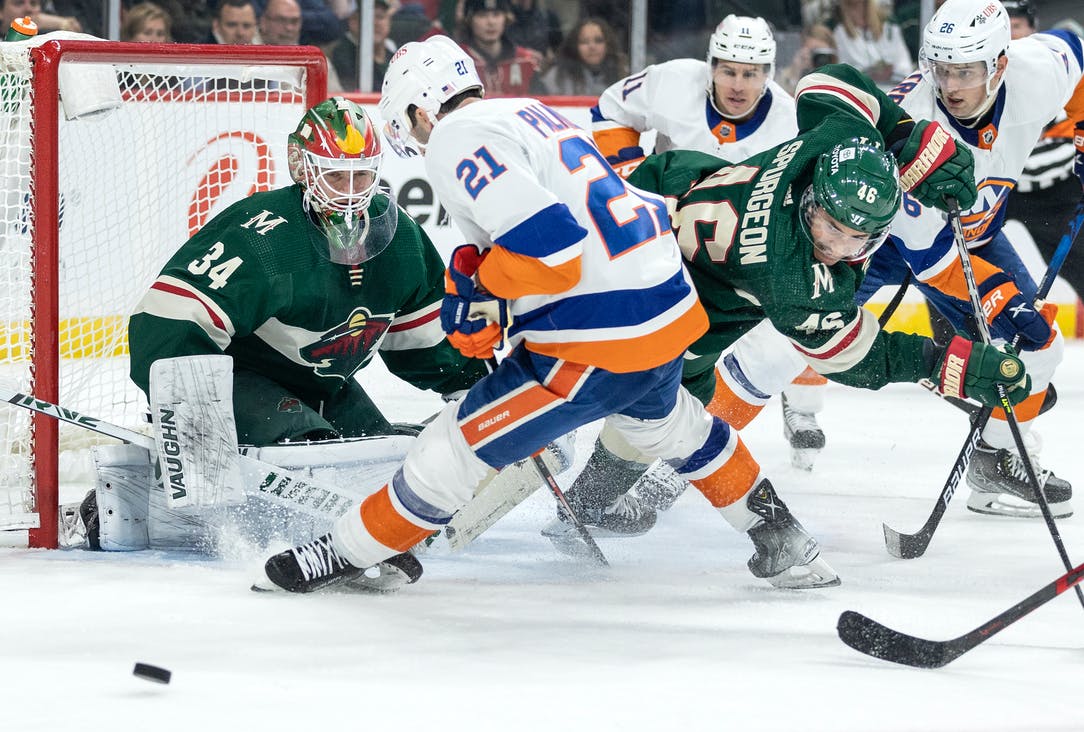 Its no big secret, but the Minnesota Wild’s schedule the last two months has made it tough to build any kind of momentum.  This example will date me a bit, but its like a bad record or a dirty or scratched compact disc where it skips and you have to give a bit of bump to get it back on track.

Remarkably, the Wild seem to be comfortable with the long periods of rest between pairs of games.  The Wild won all 3 games this week, including two on the road against the Metropolitan Division-leading New York Rangers and New York Islanders respectively.

If you look back in the team’s history, the Wild were notorious for looking like the fatigued team when coming back to play after a long layoff.  (knock on wood) This year’s edition of the Minnesota Wild has that ability to pick up where it left off.  They certainly has made games a bit dramatic at times like holding onto a one goal lead against the Islanders this evening but they still find a way to get the job done.

No Marcus Foligno?  No problem.  The team moves up Brandon Duhaime and the speedy winger chips in the first goal on a play that seemed very reminiscent of Foligno himself by crashing the net.

It wasn’t perfect.  There were some ugly turnovers, as Duhaime’s mishandling of the puck led to a breakaway goal for the Islanders’ Ross Johnston.  Yet in many of the situations where the Wild had a defensive zone breakdown, Cam Talbot and Kaapo Kahkonen stepped up to deliver a clutch save.

Kahkonen’s strong performance this evening certainly should endear him to the Wild coaching staff who know that starting on February 8th when the team will be playing literally every other night for the next two weeks that it can give him the call and feel confident he can deliver when his team needs him do so.  He had 40 saves against the Islanders to earn his 10th win of the season.

Kirill Kaprizov and Kevin Fiala continued point-streaks that have played a big role in Minnesota’s recent success.  Rookie Matt Boldy, who had a goal and an assist against the Islanders, has been the catalyst for Fiala keeping that scoring streak going.

Jordan Greenway and Joel Eriksson Ek‘s return has rekindled the magic of their big grind line.  They drive opponents crazy with their ability to work pucks deep and then use their strength and big bodies to keep it away from opposing defenders.  That has come in real handy at controlling the pace of play against skilled teams like the Blackhawks and Rangers.

Foligno’s ‘upper body injury’ is reported not to be serious and there is a fair chance he could be available for Wednesday’s game against Chicago.

Minnesota will play Chicago at United Center on Wednesday and then go on the All Star Break.  It is literally the calm before the storm.  However, repetition usually makes teams execute better and one can only hope the Wild get sharper as they jump into the ‘busy’ part of its schedule.

What did you think of this week’s slate of games for the Minnesota Wild?  Tell us what you think on Twitter at @CreaseAndAssist!

A few weeks ago, the Iowa Wild were in a free fall in the standings.  A big reason for that drop was that its power play had gone cold.

They went from having a power play that ranked inside the top 10 to one that had fallen as far as 21st operating a little below 18%.  What a difference a weekend makes as Iowa’s power play struck 3 times against the San Diego Gulls and suddenly its back in 13th in the league at nearly a 20% rate.

Leading scorer Marco Rossi is at his best with the extra space and time the power play provides the Feldkirch, Austria-native.  With time and space his teammates have learned to realize just how dangerous his shot is.  Whether its the quick release or the sheer velocity of it, it always seems to cause chaos whenever he puts one on goal.

No doubt that news will be make the Minnesota Wild management and player development staff have a smile on their face.  Especially as the team nears the NHL trade deadline, perhaps the team can avoid making a trade and instead promote from within instead?  Although that would mean he would start to burn a year of his NHL contract, something I think may make the Wild think twice about calling him up to the big club.

To use Rossi’s own words, as long as he’s in Iowa his focus is on what happens in Iowa.  That no doubt will please Iowa Wild head coach Tim Army who demands an attention to detail from his players.  Rossi’s focus may have gone too far as he chastised veteran Cody McLeod for being late to the team bus, where the veteran enforcer just laughed but listened to the vocal rookie.

Another player who made some noise this weekend was Mitchell Chaffee who seems to be developing some great chemistry with Rossi and Mason Shaw.  Chaffee netted a natural hat trick on Saturday in the 1st period against San Diego.

The former UMass Minuteman has exhibited more speed and more assertiveness this season and his emergence has been important for a club that was searching for offense after the departures of Boldy, Connor Dewar and Kyle Rau to Minnesota.

Having Calen Addison back on the point certainly hasn’t hurt either.