Just 58 seconds into the game, Jordan Greenway would gather up a puck from behind the Colorado Avalanche goal and beat Pavel Francouz short side and from there the Minnesota Wild were not looking back as the cruised to a 4-1 victory.

Toss in the Vegas Golden Knights 7-4 rout of Saint Louis in Saint Louis and the Minnesota Wild definitively secured home ice advantage in their future playoff series against the Blues.  Before any Wild fans spend too much time crowing about the fact the Blues gave up 7 goals to Vegas, they might want to remember that earlier in the week Minnesota gave up 5 goals in an ugly 5-3 loss to the Coyotes.

Team captain Jared Spurgeon and alternate captain Matt Dumba returned to action to shake off some of the rust before the post-season.  Indeed at times they looked a bit rusty as a bad turnover near the blueline by Dumba turned into Nazem Kadri‘s lone goal for Colorado.

Friday’s night’s tilt had a playoff feel to it.  Physically more intense, both teams were throwing their weight around with great frequency to start the game.  Beyond home ice advantage being secured, perhaps the biggest storyline from Friday night’s game was the lower body injury sustained by Marcus Foligno after taking a vicious knee-to-knee hit from Colorado’s Kurtis MacDermid.

Foligno spun wildly (no pun intended) after the hit and laid on the ice a long time as the Minnesota Wild training staff gave him assistance to get off the ice and to go to the locker room.  It didn’t look good and if its a knee injury as one would suspect that might keep Minnesota’s most gregarious leader out of at least a few playoff games.  Not to mention his 23 goals.

If Foligno is out for a while it will be interesting to see if the team promotes Nic Deslauriers to the 3rd line along side Joel Eriksson Ek and Greenway.  Or will they give Nick Bjugstad that opportunity?

Marc-Andre Fleury looked better against Colorado than his previous start against Arizona where he appeared more than a little shaky.  Was he good enough to convince Wild head coach Dean Evason that he should get the 1st start against Saint Louis?

What did you think of this week’s slate of games?  Tell us what you think on Twitter at @CreaseAndAssist! 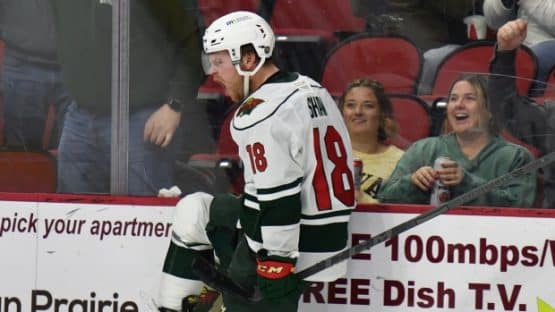 In profession sports, when your team puts its fate into the hands of other teams it usually doesn’t end well.  This was the case for the Iowa Wild last week when it dropped back-to-back games to the Texas Stars giving Dallas’ AHL affiliate the ability to determine its own destiny.

On Tuesday, Texas defeated Manitoba sealing Iowa’s fate and causing them to miss the 2021-22 AHL Playoffs.

1. Late Game Breakdowns – As much as Minnesota treated its fans to late-game heroics, it was the opposite for the Iowa Wild.  Iowa would find ways to squander 3rd period leads and were usually unable to push games to overtime.  At times it appeared the Wild would just sit back in hockey’s version of a prevent defense but it only encouraged opponents to continue to attack until they were finally rewarded.

2. Goaltending and injuries led to free fall in the standings – In mid November, Iowa was one of the better teams in the AHL.  But they’d suffer injuries to then starting goaltender Andrew Hammond and the team went on an 8-game winless streak from November 28th to December 14th.  It was a hole they were not able to climb out of.

3. Power Play Outage – When Iowa was near the top of the league standings, a big reason for it was its potent power play.  Led by youngsters Matt Boldy and Marco Rossi the team had a lethal 1-2 combination and AHL journeyman Joe Hicketts had a hot start as well.  When Boldy was called up to Minnesota, everything changed.  Opponents could isolate and keep Rossi under wraps which forced Iowa to find other ways to score and they couldn’t.  Mitchell Chaffee was able briefly resuscitate the lagging power play but teams would adjust and pretty soon the Iowa were again stagnant on the man advantage.

Yet it wasn’t all bad.  Iowa had one of the AHL’s best penalty kill units all season long.  Marco Rossi, Calen Addison, Mason Shaw and Nick Swaney all had relatively solid seasons.  Adam Beckman, after a great NHL pre-season certainly learned its not as easy to score in the pros as it was in major junior as he only managed to find the back of the net 11 times this season.

Will this be the last we see of team captain Cody McLeod?  It should surprise no one that he led Iowa in penalty minutes, but what may surprise people was how well respected and how he earned rave reviews from the coaching staff for his professionalism and setting a good example for younger players to follow.  He kept the locker room and practices light but did not hesitate to stand up for teammates.  Will the 37-year old choose to retire after this season?  Only time will tell.

Lastly, it will be interesting to see what happens to the Iowa Wild’s coaching staff.  Whenever Minnesota called up a player from Iowa, they seemed to fit into Minnesota’s system well.  That’s a testament to the hard work of Iowa’s coaching staff of head coach Tim Army and assistants Nate DiCasmirro and Nolan Yonkman.  I am sure the organization is disappointed the team didn’t make the playoffs but will that mean they clean house?  I guess we’ll see what happens this summer.

D – Kyle Masters (Red Deer, WHL) ~ Mobile defenseman had an assist in Red Deer’s .  Masters has 2 helpers in 5 playoff games for the Rebels.