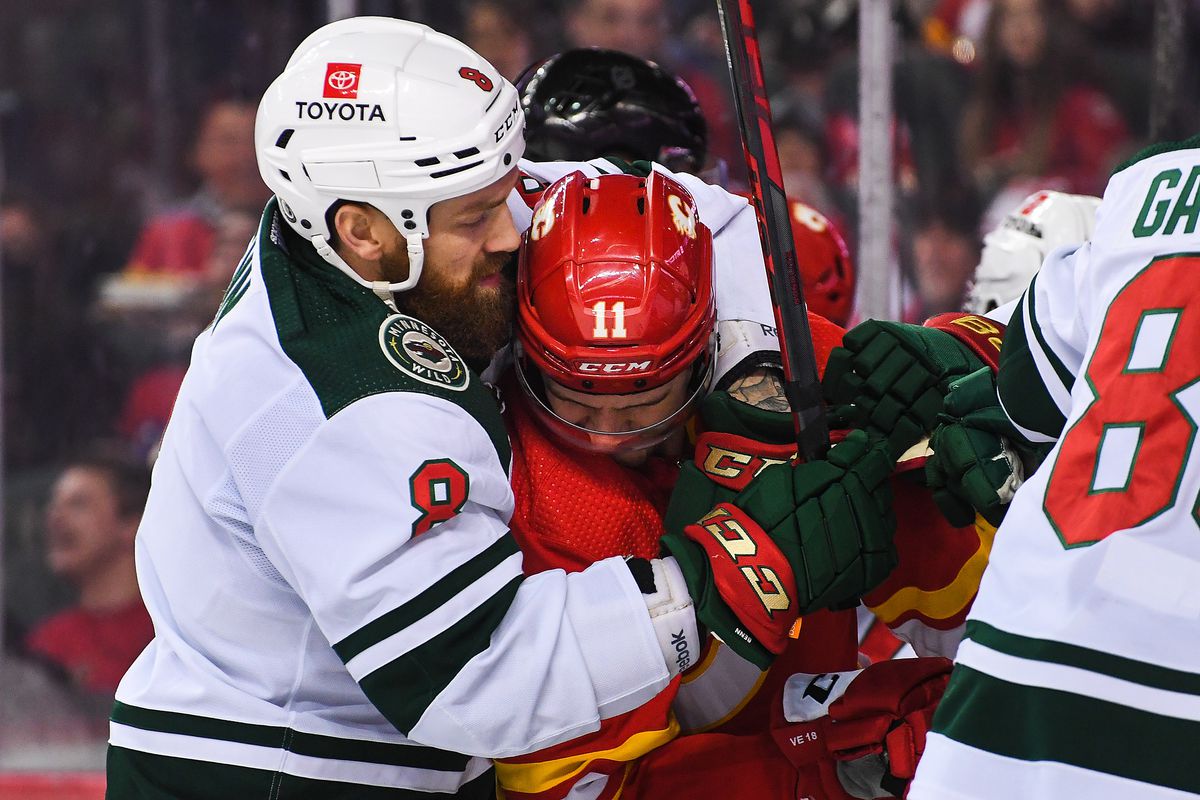 The Minnesota Wild will probably be glad to be out of Canada after a rough 4-game road trip that saw them come away 1 victory and 3 regulation losses to Ottawa, Toronto and Calgary.  Defensive breakdowns became a theme which has the team soul searching and asking questions about their goaltending.

No, we’re not talking about Kaapo Kahkonen here.  Even though he gave up 5 goals on Saturday to the Flames, Kahkonen looked like Denis Lemieux for the Charlestown Chiefs as he had little or no support in front of him.  Wild defenders were allowing Calgary to make cross-ice passes and that that led to quick shots that were too much for the young Finn to stop.

Cam Talbot is a bit different story.  After struggling mightily against the Ottawa Senators, the Wild opted for Kahkonen the last two games.  That may seem odd to those looking on the outside considering the fact Talbot competed in an NHL All Star game just two weeks ago.  He seems to be struggling to track pucks and has had a penchant for giving up a soft goal.

However, that isn’t the only issue.  Minnesota has been notoriously slow to start games.  Saturday was a glaring example of this where the Calgary Flames outworked the Wild who looked tired and hesitant as they were outshot 18-4 in the 1st period.

On the latest episode of Worst Seats in the House with Michael Russo and Anthony LaPanta, the Wild’s beat reporter pointed out that many members of the Wild are banged up and battling nagging injuries.  The team seems collectively hesitant and you can almost sense that the team has an impending sense of doom or collapse and their play on the ice reflects that.

The only line that seemed to have any juice this week was the Matt Boldy, Frederic Gaudreau and Kevin Fiala line.  That’s good, but unfortunately they haven’t been getting nearly enough from everyone else.  The 3rd line of Marcus Foligno, Joel Eriksson Ek really misses Jordan Greenway who may not put up a lot of points but he certainly throws his weight around and that has been a noticeable absence.

Earlier in the season, the club’s 4th line earned reviews for their pesky play as well as the fact they didn’t make many mistakes.  Now, the 4th line seems to be at the center of momentum-changing gaffes.

I hope Sutter is being truthful when he says Kylington is “fine” but, intentional or not, I suppose this means Hartman will be obligated to fight Tkachuk on Tuesday because ‘code’ or something. 🙄 https://t.co/xXTBOUUSwd

Brian is of course referencing the fact Matt Dumba was obligated to fight Matt Tkachuk in a later because an open-ice hit he delivered late in the game to a Calgary player.  At that point, Dumba was having the best season of his NHL career with 12 goals, 22 points in 32 games before his fight with Tkachuk which injured the defenseman as he tore a pectoral muscle in the scrap.

I think its fair to argue that his career has never been the same since that fight.  So if Tkachuk or any Flames player wants to fight, my advice to Ryan Hartman is to just skate away.  The last thing the Minnesota Wild need is another injured player.

Oh and in case you were not aware, the Wild play Calgary again on Tuesday in St. Paul.  Yay!

What did you think this of this week’s slate of Wild games?  Tell us on Twitter at @CreaseAndAssist!

One Step Forward, Two Steps Back for Iowa

A group called the Desert Rose Band had a song by the same name where it was describing a dance move that ‘couldn’t last’.  For the Iowa Wild, its win one game and lose two (or more) over the course of the week and it is no surprise the team has begun a steady fall in the American Hockey League Central Division standings.

Iowa lost two games to the Texas Stars, a team that was behind Iowa in the standings going into the week and found themselves leapfrogged by them.  Sadly, that has been the trend the last few weeks and the gap the team had from a fast start has steadily eroded and now Iowa is in danger of missing the playoffs.

Scoring became less consistent.  While Marco Rossi and Mitchell Chaffee have been fairly steady by chipping in a point nearly every game, the rest of the team has been inconsistent.  This has been especially true of veteran players like Kyle Rau, Joey Cramarossa and Dominic Turgeon.  And in Cramarossa and Turgeon’s case, they can’t blame it on call ups to the big club either.

Other players started out hot and then froze.  Adam Beckman, Joe Hicketts and Nick Swaney all started out at a torrid pace but then the points just stopped.

Goaltending has also been inconsistent beyond veterans Zane McIntyre and since the team traded Andrew Hammond.  Hunter Jones has a penchant for giving up a splurge of goals and the team’s sputtering offense can’t make up the difference.  Dereck Baribeau is now anchoring the goaltending load with the ECHL’s Iowa Heartlanders.

Iowa’s once potent power play took a big hit when Minnesota called up Matt Boldy, and Joe Hicketts who started the season as a great weapon from the point hasn’t found the back of the net in months.

Team composure has also been a bit suspect at times with players getting thrown out of the game for arguments with officials and scrums after the whistle.  Is that a sign this team is starting to tune out Iowa Wild Head Coach Tim Army?

This might be anecdotal, but during a game against the Dallas Stars where the Wild were trying to attempt a late-game rally I saw the team take a timeout.  Army took out the whiteboard and was drawing up a play and giving instructions and I noticed that the players on the ice were only somewhat paying attention to what he was saying.  That’s not a good sign.

Is that disconnect due to the team’s struggles or have they heard it all before and have kind of mailed it in?  Only time will tell.

D – Kyle Masters (Red Deer, WHL) ~ Points don’t happen too often to the mobile but defensively sound blueliner but Masters had a goal on 2 shots in the Rebels’ 3-2 victory over Prince Albert.  Masters has 3 goals, 9 assists, 12 points, 33 PIM’s and is a +26 in 50 games.

LW / C – Sam Hentges (St. Cloud State, NCHC) ~ Former Totino-Grace star had a big night for the Huskies as he had two goals and an assist in St. Cloud State’s 4-1 win over Colorado College.  He would add another goal and a helper on Saturday as St. Cloud State swept the Tigers in a 6-2 victory.  Hentges has 10 goals, 9 assists, 19 points, 14 PIM’s and is a +6 in 15 games.

High School Hockey Report:  The Girls State High School Hockey Tournament took place this week and wrapped up Saturday with two thrilling championship games.  Congratulations to all schools, players, coaches and families whose teams made it to state this year.  It was another great state tournament!