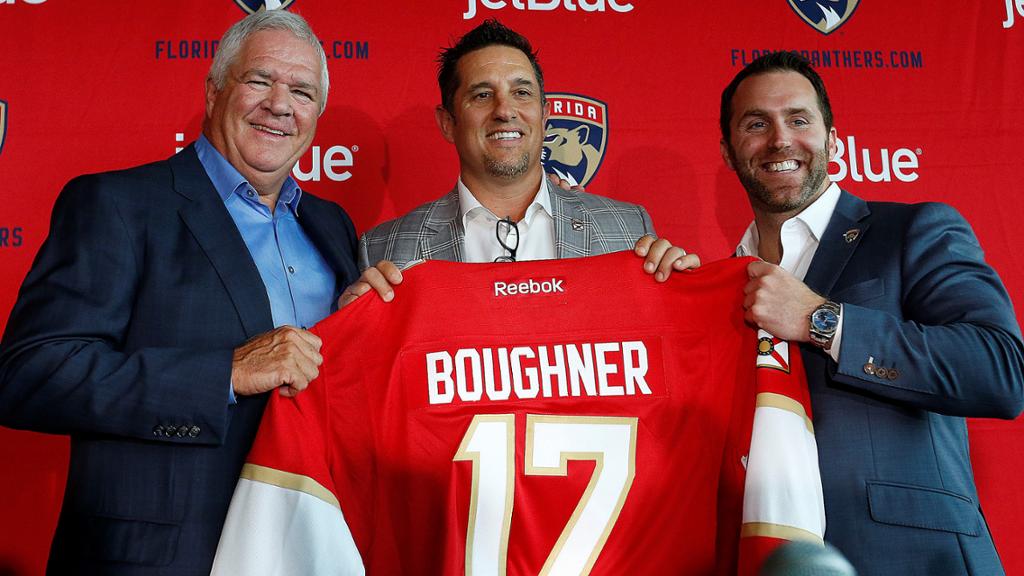 Bob Boughner rose to fame among fans of the Edmonton Oilers during the 2009-10 season when he was the head coach of the OHL’s Windsor Spitfires. There, Boughner lead a team that featured Taylor Hall, the man many expected the Oil to select first overall in June’s draft. The Oilers did select Hall, but not before he and Boughner won their second straight Memorial Cup Championship.

Boughner’s OHL career coaching wise was short. He led Windsor for just four seasons, making the playoffs in his final three and winning the Memorial Cup in his final two. He did such a good job that the Columbus Blue Jackets hired him for the 2010-11 season as an assistant coach under Scott Arniel.

Columbus managed a 34-35-13 record during the 2010-11 campaign, but Boughner elected to return to Windsor following the season. After four more seasons leading the Spitfires, with just two playoff appearances and zero series wins, Boughner returned to the NHL in 2015-16 on the staff of Peter DeBoer in San Jose.

The Sharks would reach the Stanley Cup Final in Boughner’s first season, then fall to the Oilers in the opening round in 2017 before Boughner once again stepped away from his assistant coaching gig. This time, however, it was to run an NHL bench of his own. Dale Tallon selected Boughner to be the bench boss of the Florida Panthers in the spring of 2017, a role he would hold until this past April.

Boughner was fired immediately following this past season, as the Panthers made room for Joel Quenneville to take over behind the bench. It’s understandable why the Panthers made the decision they did, but still unfortunate and almost unfair to Boughner.

It also doesn’t help that the Panthers missed the playoffs in both of his seasons at the helm. After an expected transition period early in 2017-18, the Panthers kicked it into gear in January and ended up missing the playoffs by just a single point. After being the hottest team in the league in the second half and finishing with 96 points, expectations were high.

The Panthers failed to meet them this season, finishing with a 36-32-14 record and 86 points. They were sunk by pitiful goaltending, as Roberto Luongo could not stay healthy and the team’s save percentage for the season ended up below the .900 mark (.891).

Guys love Boughner and love playing for him. We saw Logan Couture, who played under Boughner for two seasons in San Jose, blast the Panthers on Twitter over the firing last month. He’s one of those guys that players buy into, that players listen to. I look at the buy-in from the Panthers in 2017-18, which nearly got them into the playoffs after a shaky start, as proof of that.

Boughner’s team also performed quite well in Florida. They were almost always even in terms of possession and usually were able to light the lamp with relative ease. Their Corsi For % in both seasons was right around even, with a 49.2% mark in 2017-18 and a 49.4% mark this past season.

The 2017-18 group posted a 50.2% Scoring Chances For mark, while sporting a 15.5% conversion rate of high danger chances into goals. The Panthers scored 248 goals that season, which was good for 14th best in the NHL.

A lot of those numbers were similar in 2018-19. Florida posted a 49.2% SCF% while converting 18% of their high danger chances into goals. The offense, as a result, improved to 9th in the league with 267 goals for.

I don’t think it is crazy to suggest that if Florida got league average goaltending that they would have been a playoff team this past spring. Brian Burke is right, they might as well call hockey ‘goalie’.

Not many people have discussed it this off-season because it was Florida and the hire is a far bigger name than the fire, but Bob Boughner is a good coach that lost his job for reasons beyond his control. He can’t make the saves for his goaltenders, and he can’t control if Coach Q wants the job or not.

Fairly or unfairly, he’s a free agent right now and should be garnering interest from teams like Edmonton and Ottawa. I believe Boughner entered this process as a candidate for the head coaching gig, but I’m not sure that is the case anymore.

So why write about him? Why waste my time putting this piece together, and why waste your time reading it? Because it is looking like Boughner may still end up with the Oilers.

Sportsnet’s Elliotte Friedman reported that Boughner is a strong candidate to join the Edmonton coaching staff this coming season. Putting the pieces together, I can’t help but think that Boughner will be the right-hand man to Dave Tippett in Edmonton.