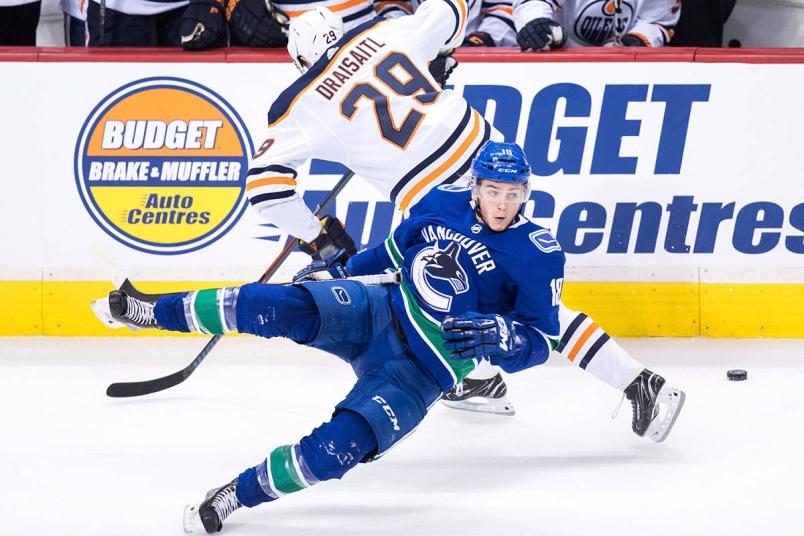 It’s a quick turnaround for the Edmonton Oilers, who turn the page from last night’s 2-0 victory over the Jets and head to Vancouver. Game two of the preseason will provide a stiffer test, as the Canucks plan to play a number of veterans while the Oilers bring a lesser, AHL-like roster.

The Oilers will only play four players tonight that saw action against the Jets, meaning this game is still very important to the guys in the lineup. For a lot of players, this is their only chance to make a first impression on coach Dave Tippett. With so many roster spots up for grabs, it’ll be a good night to evaluate against a largely NHL lineup.

Starrett will play the whole game, while Dylan Wells backs him up. Wells made seven saves in relief last night. Gaetan Haas and Caleb Jones will travel just in case someone cannot go, but neither is expected to play. Russell, Cave, Bouchard and Benson all return to the lineup after last night’s victory.

Ferland and Myers will make their Canuck home debuts tonight, while Pettersson takes the ice for the first time this preseason. Star defender Quinn Hughes is in the lineup for this one, while PTO Landon Ferraro gets a look with skilled forwards in Gaudette and Goldobin.

The Oilers ‘shutdown’ pair of Darnell Nurse and Adam Larsson will take the ice for the first time under Tippett. They’ll get a stiff test against some strong Canuck forwards. This pairing is key to Edmonton’s success this season. If they can saw-off the tough opposition, the Oilers’ defense could be much improved. They struggled mightily a season ago, but looked good together in 2017-18.

Bouchard gets his second look of the preseason. He’s building legit momentum. He was the best player on the ice in the scrimmage on Sunday, and had a really strong showing last night against the Jets. Another good game tonight, against a stronger lineup, and his chances will skyrocket.

Good chance for fans to watch bottom-six forward candidates Granlund, Gambardella and Cave. Cave looked good last night and could jump ahead of Haas with another strong showing in this game. Can Benson build off of a strong night last night?

Cooper Marody has the skill and versatility to make the NHL roster. Tonight, he’ll get to show those traits off for Ken Holland for the first time. He gets AHL tough guy Peluso and skilled forward Jurco to work with. This is a big opportunity for Marody. He has the most to gain in my opinion.