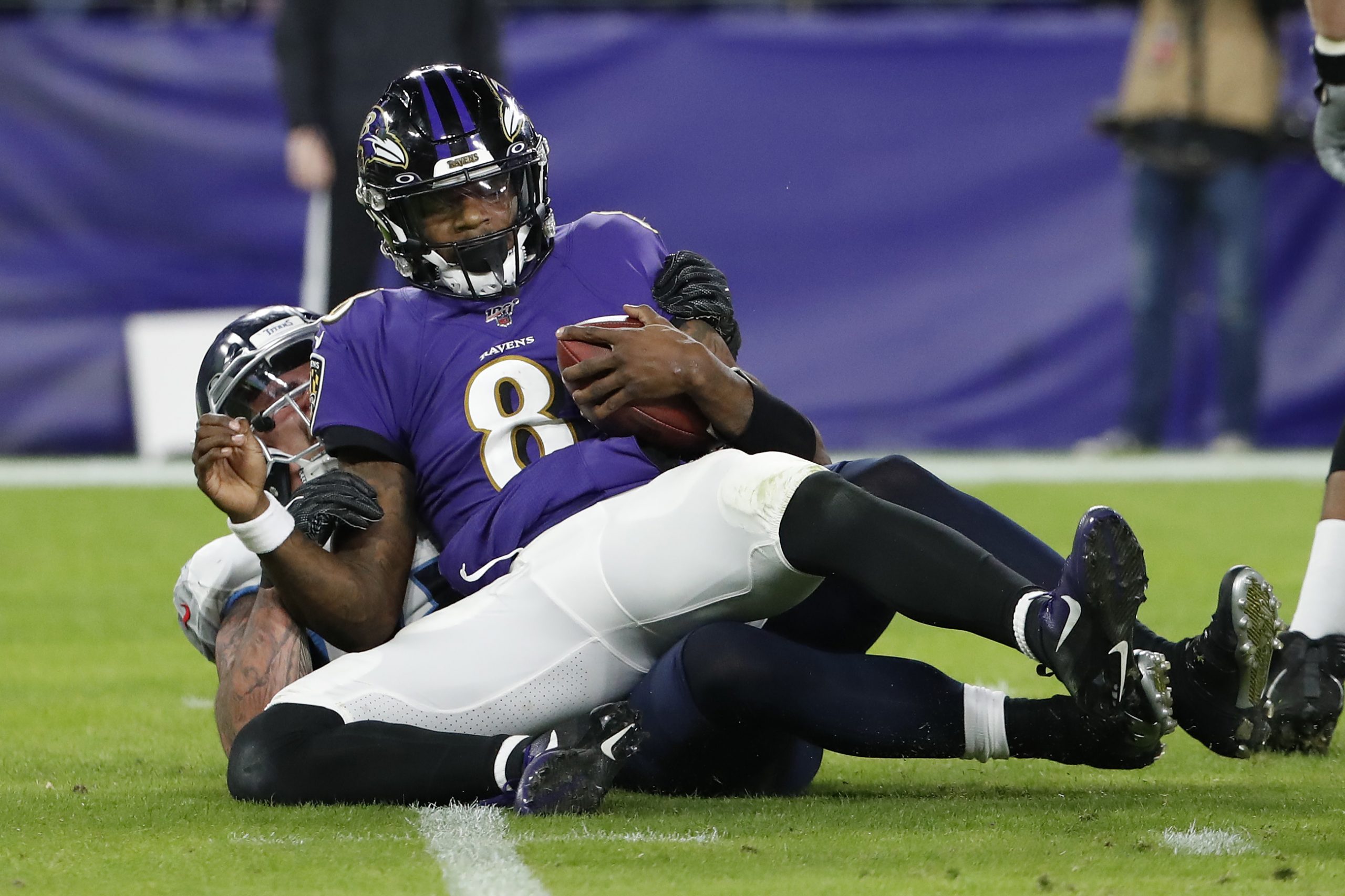 Truth be told, the Ravens were on the verge of physical exhaustion, too. It came down to what tires you out more, chasing Lamar Jackson or being the guy constantly chased…

Lamar ultimately came through for Baltimore after shaking off a very inconsistent and physically punishing effort for most of the game.

“He’s a fighter, and he’s a finisher,” Ravens linebacker Patrick Queen said. “They try to label him. They try to just say everything they can about him, because they know what type of person he is — they know how good he is and how scary he is. People can throw the labels at him all they want; he came back, what, three times this year? So, hats off to him controlling our offense, getting the ball to the guys and just making plays.”

“I’d rather not be behind,” Jackson said. “I’d rather just step on the gas and just keep going, just keep scoring. But our team, we’re fighters. We believe in each other. We’ve got faith. We were just talking about that in [the locker room]. We’ve just got to keep it going. Hopefully, we won’t be in any more overtime games.”

This is the second time this season that Jackson rallied Baltimore from a 14-point hole in the second half (the 31-25 win over the Colts on Monday Night Football was the other). How amazing is that? In coach John Harbaugh’s first 13 seasons in Baltimore, the Ravens were 2-35 when down by at least two touchdowns.

Justin Tucker kicked a 36-yard field goal with 16 seconds left in overtime to give the Baltimore Ravens a 34-31 win over the Minnesota Vikings on Sunday. It was the 18th game-winning field goal for the star kicker, who made the longest kick in NFL history when he drilled a 66-yarder to beat Detroit in Week 3.

Once Devonta Freeman broke loose for a 19-yard run to the Minnesota 39, the Ravens were in decent shape to set up a field goal. They ended up getting a good bit closer.

Tucker has made 53 consecutive field goals in the fourth quarter and overtime.

The AFC North-leading Ravens (6-2) rallied from a 14-point third-quarter deficit and survived an acrobatic interception by Minnesota’s Anthony Barr on the first possession of overtime. Barr tipped Lamar Jackson‘s pass and caught it out of the air, giving the Vikings the ball at their own 38, but Minnesota went three-and-out, and Baltimore drove into Tucker’s range again.

It was the third overtime game of the season for each team. They both had split their first two. This was another agonizing loss for the Vikings (3-5), who have not dropped a game all season by more than seven points.

The Ravens took a 31-24 lead on Le’Veon Bell‘s 1-yard run with 3:29 remaining in regulation. The Vikings tied it on a 1-yard scoring pass from Kirk Cousins to Adam Thielen with 1:03 to play.

Jackson threw for 266 yards and three touchdowns with two interceptions. He also ran for 120 yards on 21 carries. It was his 10th career 100-yard rushing game, tying Michael Vick’s regular-season record for quarterbacks.

Baltimore trailed 24-10 after Minnesota’s Kene Nwangwu ran the second-half kickoff back 98 yards for a touchdown, but the Ravens rallied thanks to three big fourth-down conversions.

Devonta Freeman ran for the necessary yardage on fourth-and-2 from the Baltimore 36, and then Jackson threw a 1-yard touchdown pass to Patrick Ricard on fourth-and-goal to make it 24-17.

On the Ravens’ next possession, Jackson converted a quarterback sneak on fourth-and-1 from his own 27. Baltimore later made a first down on third-and-15 when Marquise Brown gained 18 yards on a catch-and-run.

Jackson eventually threw a 5-yard TD pass to Devin Duvernay, a difficult catch that tied the game and capped an 18-play, 82-yard drive that took 10:17.

“I thought we were actually playing pretty well on defense,” Vikings coach Mike Zimmer said. “Then we got kind of worn down.”

Penalties played a significant role in the first half. Minnesota’s D.J. Wonnum was called for a horse-collar tackle — a replay appeared to show he grabbed Jackson’s jersey in the middle of the back, not the collar — and that kept a Baltimore drive going when the Vikings thought they had come up with a stop on fourth down. The Ravens eventually kicked a field goal.

Justin Jefferson ran right past defensive backs Marlon Humphrey and Chuck Clark before hauling in a 50-yard touchdown pass from Cousins. On Minnesota’s next drive, Dalvin Cook‘s 66-yard run helped set up a 1-yard TD run by Cousins that made it 14-3. The Ravens appeared to have stopped the Vikings on fourth-and-goal from the 2, but a pass interference call on Chris Board gave Minnesota a new set of downs.

“Take what you can, give away nothing — that’s winning football. We’ve done a lot of giving,” Ravens coach John Harbaugh said. “But we’ve also done a lot of overcoming. I’d like to cut down on the giving, even though it’s Thanksgiving coming up. We’ll be thankful for the overcoming.”

Down 17-3 late in the half, Jackson threw a deep pass for rookie Rashod Bateman. Xavier Woods arrived a bit early, and that pass-interference flag gave Baltimore a 42-yard gain to the Minnesota 5. Jackson flipped a touchdown pass to Freeman on the next play.

The Ravens lost their previous game 41-17 to Cincinnati, and their defense didn’t look any better at the start of this one while allowing big plays to Jefferson and Cook.  After halftime, however, Minnesota managed only 114 yards. The Ravens ended up with a 36-13 edge in first downs. Baltimore also controlled the ball for 46:04 to Minnesota’s 23:40.

“We were doing a pretty good job of moving the ball, but they just kept us off the field,” Cook said.

INJURIES—  Harbaugh said S DeShon Elliott will likely be out for the season with an injury to his pectoral/bicep area. Baltimore was without WR Sammy Watkins (thigh) and RB Latavius Murray (ankle), and Ravens DT Justin Madubuike was shaken up late in the fourth quarter. … Minnesota was missing DT Michael Pierce (elbow), and CB Bashaud Breeland (groin) went down in the second quarter. The Vikings put S Harrison Smith on the reserve/COVID-19 list before the game, and Zimmer said he’ll likely be out next week too.