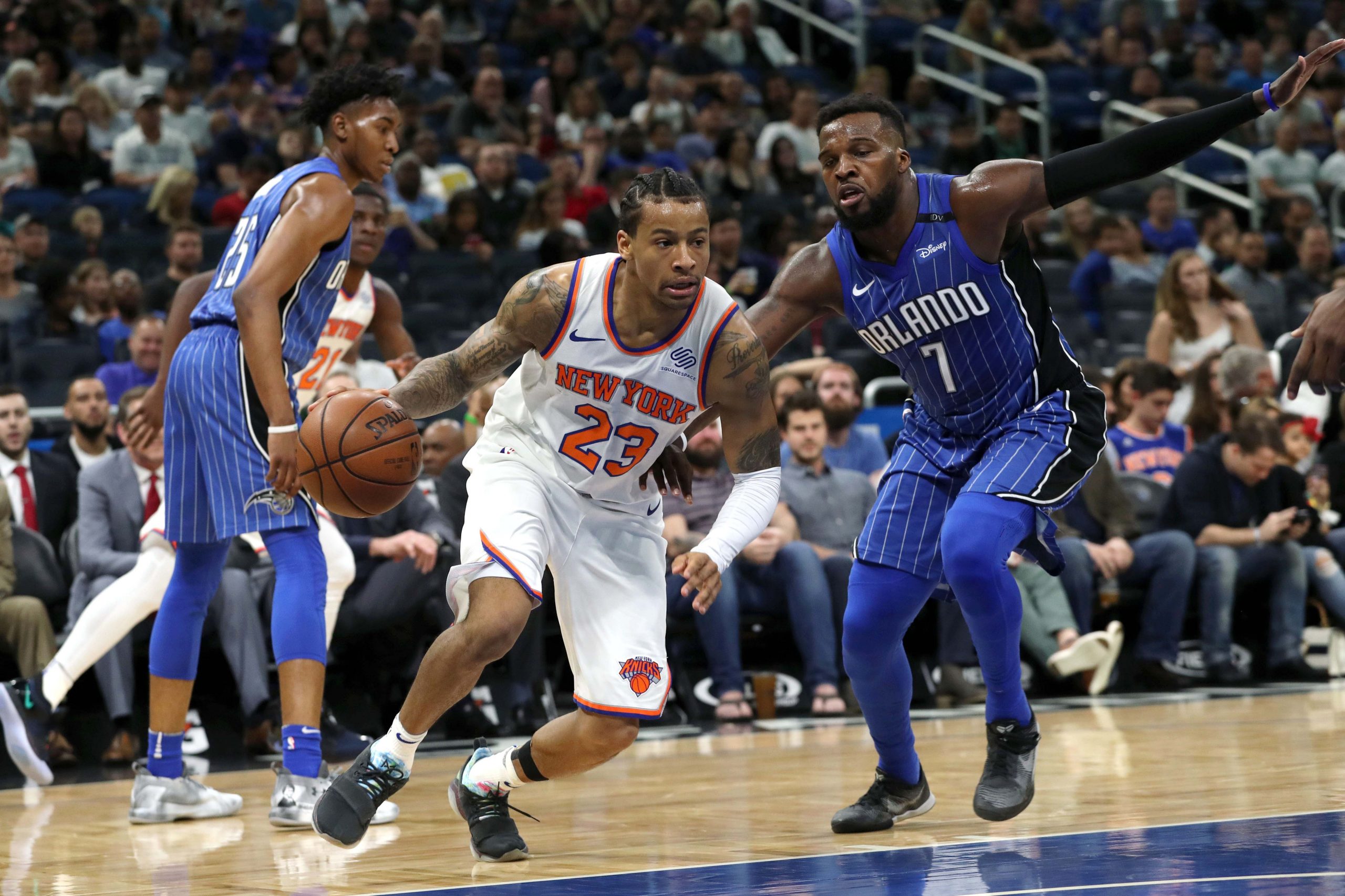 After finishing the season with a league-best 32-18 record, this campaign was definitely one to remember for the Westchester Knicks. Mike Miller received the Coach of the Year honors, the entire opening night starting five went on to suit up for NBA teams. All the while, the entire roster continues to grow as players step up in elevated roles.

21 players suited up in the minor league club’s orange and blue, with four NBA players being assigned to the team. This included Ron Baker, Damyean Dotson, Joakim Noah and Devin Robinson. Robinson joined Westchester as a flex assignment player from the Washington Wizards.

Trey Burke put his name in the Westchester’s’ history book when he totaled 43 points against the Delaware Blue Coats early on in the season. He came out strong in the second quarter by recording 16 points. The guard found his spots, drove to the basket, and beat his defender off the dribble. With Burke’s 43 points, Westchester picked up a 113-111 victory over Delaware.

In the home opener against the Grand Rapids Drive, New York Liberty legend Teresa Weatherspoon made her debut at the commentary booth. Westchester received support from the New York Knicks with Tim Hardaway Jr., Frank Ntilikina, Kyle O’Quinn and Courtney Lee in attendance at the Westchester County Center.

Joakim Noah made an appearance with the Westchester Knicks as part of a rehab assignment. He was active and productive against the Maine Red Claws. During the Knicks’ four-game road trip in December, Burke averaged 30.8 points per game. He was named Player of the Week in two consecutive weeks and became the third Westchester Knick, along with DaJuan Summers and Chasson Randle, to achieve that award.

Three days into 2018, Burke was named G League Player of the Month for December. January 7 turned out to be the Michigan product’s last game at the Westchester County Center. He signed with the New York Knicks a week later. By signing with the Knicks, Burke became the fifth Westchester Knick to earn a call-up. He was named to the midseason All-NBA G League team in February.

In the middle of January, Westchester went north for the G League Showcase. The Knicks fell to the Rio Grande Valley Vipers in the first game, but finished strong by picking up a 19-point victory over the Agua Caliente Clippers.

There was a special feel at the Westchester County Center for the team’s January 17 meeting against the Long Island Nets. Through the Garden of Dreams Night, there was an honorary broadcaster, coach, honorary cheerleaders, a great halftime show, and a Matthew Welling interview with Luke Kornet.

It didn’t take long for another Westchester Knick to get an opportunity in The Association. Nigel Hayes was the second Westchester player to earn a call-up when he inked a 10-day contract with the Los Angeles Lakers on Jan. 19. In his first game back following his stint with the Lakers, the rookie forward scored the Knicks’ first 13 points against the Raptors 905 and drained the game-winning baseline jumper.

While Burke and Hayes were in the NBA in January, Westchester added Sekou Wiggs from the player pool and Zak Irvin off waivers. Irvin became the fifth Westchester Knick to record a double-double in his debut when he tallied 10 points and 10 rebounds against the Greensboro Swarm.

On February 8, Isaiah Hicks and Luke Kornet made their NBA debuts against the Toronto Raptors. Kornet recorded 11 points and 10 boards, becoming the first Knick rookie with a double-double in his debut since John Wallace in 1996.

Xavier Rathan-Mayes became the seventh Westchester Knick— third call-up of the 2017-18 season— to make his way to The Association. On March 5, he signed a 10-day contract with the Memphis Grizzlies. He finished with eight points, five assists and two steals in his NBA debut.

With a win over the Wisconsin Herd on March 10, the Westchester Knicks picked up a franchise-high 29th victory and secured a postseason berth. On March 21, Westchester clinched the No. 1 seed in the Eastern Conference with a 119-112 win over Wisconsin.

Following his two 10-day contracts with the Toronto Raptors, Nigel Hayes  earned his third call-up of the season when he signed with the Sacramento Kings for the remainder of the 2017-18 season and for the 2018-19 season.

In the opening minutes of the Westchester Knicks’ postseason game against the Raptors 905, the Knicks started out the game 18-8. Damyean Dotson was on fire early on in the first quarter. He had 10 points in the first five minutes and drained two of his shots from deep. The Knicks maintained a lead through the first half of play. The Raptors 905’s strong defense pushed them to a 92-80 win over Westchester in the G League semifinals.

The season didn’t end the way the Westchester Knicks would have liked. On the bright side, the organization put their players in the best position to earn call-ups during the season and potentially get looks for NBA Summer League. From the players to the coaching staff, the whole team put a special thing together during the 2017-18 season, which is something that will live in Westchester’s franchise history forever.