Storming Up A Trade: Are The Oilers and Hurricanes a Match? 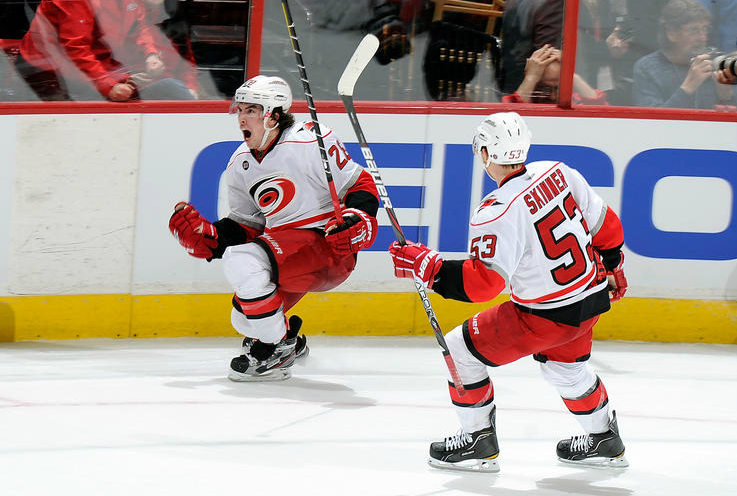 The Carolina Hurricanes are undergoing major changes as an organization. Tom Dundon officially bought the team during the season and took over as the club’s owner, while GM Ron Francis was essentially fired, Errrrrr, in the process of writing this Francis saw his contract terminated with Carolina. He no longer is a part of the organization in any way.

Bill Peters used his out-clause and is now in Calgary, while Dundon has publicly stated that he wants his team to play tougher next season. With a lottery win moving Carolina up to second overall in this June’s entry draft, it sure seems like further changes are coming.

In addition to all the changes above for Carolina, this is a team that hasn’t made the playoffs since the spring of 2009. The Hurricanes have always been possession darlings and are always a preseason sleeper, but they’ve never been able to get back to the postseason.

The ‘Canes are a young team and have a strong prospect system, but they still haven’t reached their goals in nearly a decade. In a non-traditional market, this kind of drought can be a death blow. That’s why winning right away under Dundon will be vitally important to winning the fanbase back.

Dundon alluded to changes coming to his roster when he spoke to the assembled media following Carolina’s season earlier this month.

“I think it’s fairly obvious on the hockey side that we’re not good enough. We didn’t make the playoffs. The record tells you who you are. We were pretty healthy and when we weren’t good enough. I think you all write about it and people know we probably aren’t hard enough to play against. We probably don’t score enough.”

Dundon, later in his press conference, alluded further to things like engagement in the game and, without saying it, leadership.

“There’s something missing in terms of our engagement. I met with most of the players in the last couple days and they agree. They know there’s something missing. Everybody that loses is missing something. It’s easy to figure out that it’s a combination of many things, but I think for us, it’s probably more about, and I think Bill talks about it, we’re probably not engaged in the battle throughout the lineup to the level that the better teams are. … I think what we learned is we’re not good enough. Part of that’s talent but most of it is engagement.”

Credit to Andrew Schnittker of Technician Online for the quotes.

It’s pretty obvious, Carolina is going to be changing up their roster this coming summer. Bob Stauffer of Oilers Now alluded to that following the first part of Saturday night’s draft lottery, which saw Carolina jump from eleventh overall to second.

There are a few players the Hurricanes could move out to facilitate change. Right-shot defender Justin Faulk has only two years left on a contract that pays him $4,833,333 on the cap, but will cost the club $6 million a year in real dollars until July of 2020. Coming off of a tough season by his standards, he’s a candidate to go, especially since he isn’t a “tough” player to play against.

Jeff Skinner also suffered a down year, going from 37 goals in 2016-17 to 24 this past season. With just 49 points in 82 games, Skinner underperformed for a player making $5,725,000 a season. Entering a contract year, he’s another piece that very well could be on the move.

Other pieces like Elias Lindholm (RFA), Lee Stempniak (UFA), Derek Ryan (UFA) and Scott Darling ($4,150,000 cap hit through 2020-21) could also shake loose for a variety of different reasons as Carolina reshapes the roster.

So, where do the Oilers fit into all of this? Well, they have a few major needs and Carolina has a few high end players that would fit said needs. At the top of my summer list is finding a goal scoring winger. Enter Jeff Skinner, who could be on the outs because of contract and fit in North Carolina.

Skinner’s 24 goals this past season were a major disappointment, but he’s hit the 30 goal mark three times in his career and had two straight 25+ goal seasons prior to this year’s output. He’s a natural goal scorer and a guy who, for the large part, has had to do it himself over the course of his career.

In Edmonton, the left winger would play with either Connor McDavid or Leon Draisaitl. Either one would, without doubt, be the best center Skinner has had during the course of his career. It’s not crazy to think a speedy sniper like Skinner would excel with the Oilers.

On the top of Peter Chiarelli’s summer list, I suspect, is addressing the top-four defensively. The Oilers sorely need a top-four, right-shot defender who can move the puck and handle a heavy dose of powerplay time. Faulk, coming off of a season with a dreadful shooting percentage and PDO, is a perfect fit for the role and a prime bounce back candidate.

Is There A Fit Here?:

I think there is absolutely a trade fit between the Oilers and Hurricanes. If Carolina is willing to take a bad contract or two back (Russell, Sekera, Kassian, Lucic), then Edmonton could absolutely fit one or even both of Faulk and Skinner on the team moving forward.

Both fill massive needs for Edmonton, and both would represent the change Carolina is looking for. In terms of assets back, I suspect the tenth overall pick, Jesse Puljujarvi and possibly guys like Kailer Yamamoto and Ryan Nugent-Hopkins would be on the table here heading back to the Hurricanes.

If the Oilers are going big whale hunting again this summer, and I’d be willing to bet they are defensively, then Carolina is a perfect fit for a trade. They have pieces Edmonton wants, and there is a willingness to make big moves right now in Raleigh.