Take That With You 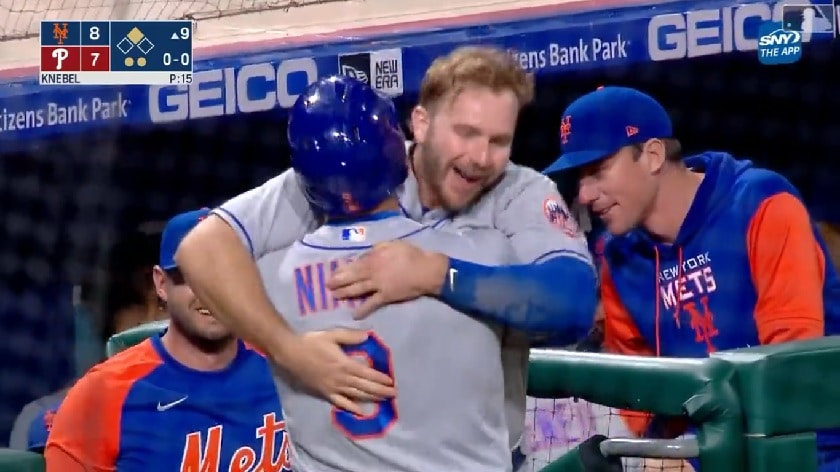 The game was over. Chasen Shreve and Adonis Media were mopping up for Taijuan Walker, who hadn’t had the best of outings. Gare was talking about his Basset Hound themed tie. Steve Gelbs was gone watching the Ranger game.

.@SteveGelbs is having a grand time watching the Rangers game 🤣 pic.twitter.com/rLPRIUvQJe

Hell, at 7-1, I started to write this post. Well, not this post. It was a completely different post. I had ended it by saying that this was a loss that would be made worse by having to stew on it for an extra day or two with the weather in Philly looking horrible for the next 24-48 hours.

But Francisco Lindor, whose error on the second batter of the game cost them a double play and led indirectly to the four first inning runs by the Phillies, blasted a two run HR to make it 7-3. Didn’t really think much of it at the time as it was off of the Phillies’ designated mop-up guy. Some guy named Norwood who left this game with a 10.29 ERA. Might have been a descendant of Scott Norwood. Who the hell knows. But he came in for Jeurys Familia who pitched the 8th with a 7-1 lead, and Lindor noticed.

"I knew they were trying to shut us down. I saw that, I'm like 'alright boys, let's do this. This is gonna be special. And it happened" pic.twitter.com/6obmsIaOQe

So Lindor makes it 7-3, and then Norwood sandwiched an out with a double to Pete Alonso and a run scoring single by Jeff McNeil. And then Joe Girardi brought in their closer, Corey Knebel to try to close it out. That’s when I got hopeful because to be quite honest, I wasn’t at all impressed with Knebel when he pitched against the Mets in Citi Field. I thought they got good at-bats against him then and thought it would help them tonight.

So Knebel comes in and Mark Canha reaches on a swinging bunt back to Knebel. Then he struck out Dom Smith as the home plate umpire’s strike zone was all over the place, but it all evened out as the bad calls went both ways. So with two outs up comes J.D. Davis to pinch hit for Tomas Nido, and he absolutely ripped a fastball down the line to score McNeil to bring the Mets within two, with runners on second and third to set up Brandon Nimmo to tie the game with a single. I thought at that point the Mets absolutely had a chance here. More than a chance … I thought they were tying the game right then and there.

Knebel started with a curveball for a strike, no doubt noticing that Nimmo liked to ambush in fastball situations when he faced him last week. So he gets over a curve for strike one. Nimmo, even if he wasn’t playing chess to Knebel’s checkers, was at least playing some sort of advanced version of Ludo or something. He took the second pitch fastball high, then guessed that Knebel would go back to the curve and he got it … lining it into center field to bring home Canha and pinch runner Jankowski to tie the game. With the Mets portion of Citizens Bank Park going crazy, up came Starling Marte who started the inning with an infield hit. Now came the ambush:

The @Mets score 7 runs in the 9th to take the lead in Philly! pic.twitter.com/pyuu8xfkdh

Edwin Diaz, bad history in Philadelphia not withstanding, shut the door on the Phillies as he struck out Roman Quinn (who came into the game for Nick Castellanos when Castellanos got hit with a pitch), got JT Realmuto to ground out, and … this is the best part … struck out Rhys Hoskins to end the game. Gary Cohen said that this is the win you can live off of for a month. The 2022 Mets have had three of these wins in two weeks. It sure as hell seems like the Mets are cashing in on all the pain they’ve endured in the last 20 years, all in one season. For all the awful losses the Mets have endured in Philadelphia. The two straight horror shows in 2007 … the blown save in 2019 which must seem like a lifetime ago for Diaz now, and countless others that have become “Phillies Classics”, it’s nice to hang one on them. And to have Hoskins strike out to end it? What a happy night. Now it’s the Phillies who get to stew on that for an extra 24-48 hours while Max Scherzer gets an extra day of rest.

Take that with you, Phillies.