Biggest surprises from Week 9 in the NFL 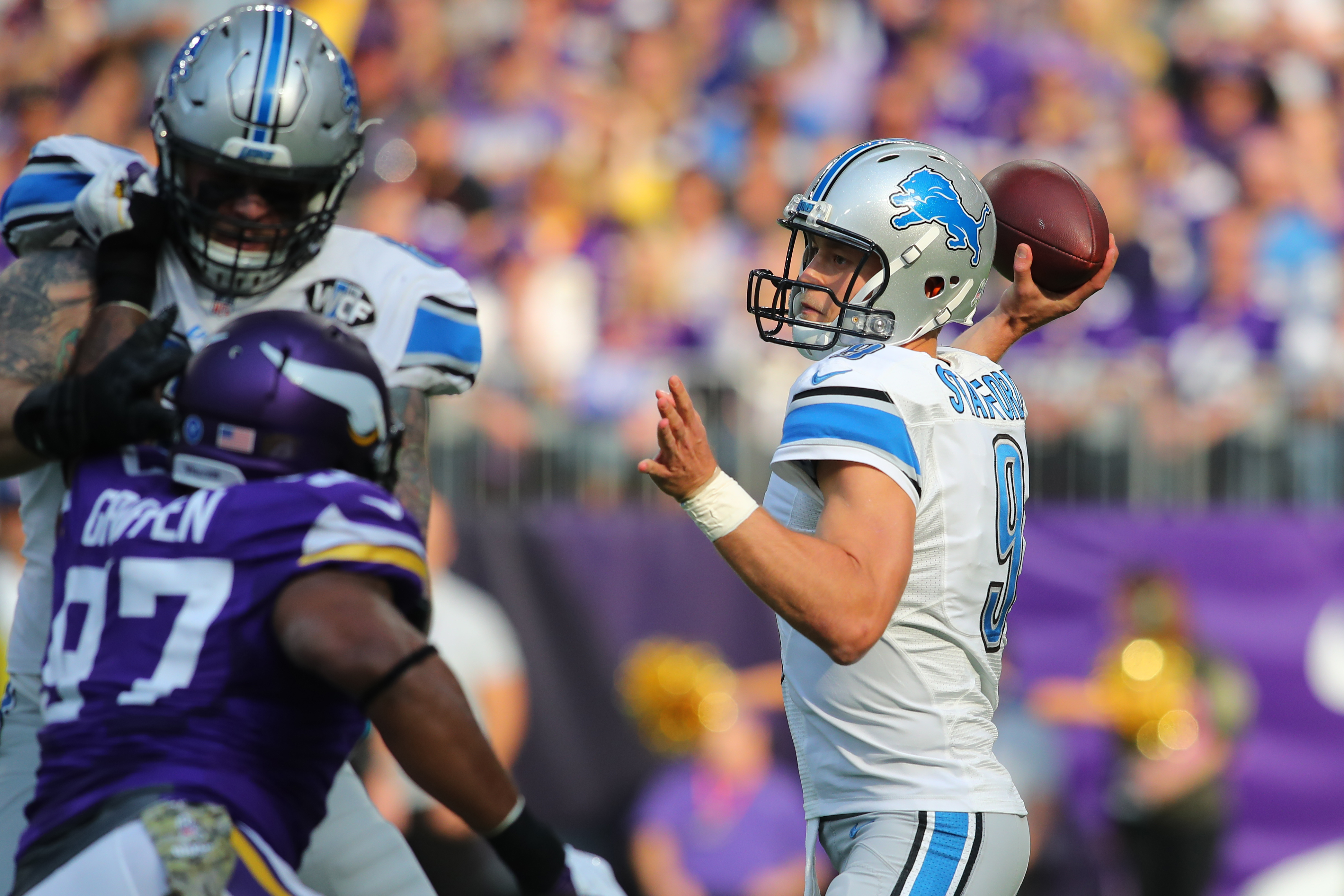 Biggest surprises from Week 9 in the NFL

An incredible comeback win from Matthew Stafford, a lifeless loss by the Packers at Lambeau Field and huge outings from Melvin Gordon, Mark Ingram and Latavius Murray highlighted the biggest surprises from Week 9 of the NFL season.

Here is a closer look at all the surprises from this week.

A week after getting gashed by Jay Cutler and Jordan Howard in Chicago, Mike Zimmer’s once dominant defense gave up the game-tying field goal in regulation and the game-winning touchdown in overtime after the Vikings had taken a three-point lead with 23 seconds left.

Comeback king Matthew Stafford found Andre Roberts for 27 yards and then spiked the football with two seconds left to set up Matt Prater’s 58-yard field goal to end the fourth quarter. After the Lions won the overtime coin toss, Stafford calmly marched Detroit 87 yards in 11 plays for the walkoff score.

The Lions’ final drive featured four third-down conversions, including Stafford’s 28-yard touchdown pass to Golden Tate. Both Xavier Rhodes and Harrison Smith missed tackles on the game-ending play. Losers of three straight games, the Vikings are all but doomed if Zimmer’s defense can’t get things turned around.

Let’s stick with the Lions, who have quietly made the NFC North a legitimate three-team race. Thanks to Sunday’s incredible come-from-behind victory in Minnesota, Detroit will ride high into the bye week with four wins in the last five games and a hold on second place in the division.

Why can’t the Lions stick around with the Vikings and Packers? Minnesota has lost three straight games, while Green Bay dropped its third game in four weeks on Sunday. Both teams are deeply flawed. The Lions have their own warts, but this is a team rallying around the never-say-die abilities of Matthew Stafford.

The Packers dropped to 4-4 after getting outplayed in all phases by the visiting Colts at Lambeau Field. Indianapolis returned the opening kickoff for a touchdown, and a late rally from Aaron Rodgers came up short after Andrew Luck converted a pair of huge third downs on the game’s final drive.

The Packers had a great chance to get even with the Vikings atop the NFC North with a win, but Mike McCarthy’s team wasn’t good enough on offense, defense or special teams. The unexpected loss dropped the Packers to 8-10 over their last 18 regular season games, including five defeats at Lambeau Field. That’s a staggering record for a team with Rodgers at quarterback, and it could get worse with three straight road games coming up.

Gordon is having a magical sophomore season, but no one could have predicted the 2015 first-round pick going off for 261 total yards during San Diego’s 43-35 win over the Tennessee Titans. Gordon rushed for a career-high 196 yards and caught four passes for 65 yards.

His 261 yards from scrimmage represent the most from a running back this season, and also the second most in Chargers history—trailing only the 271 yards gained by LaDainian Tomlinson in 2002. After nine games, Gordon is on pace for 1,365 rushing yards, 1,869 total yards and 19 total touchdowns.

Benched last week for a fumble, Ingram responded on Sunday with one of the most productive games of his NFL career. The Saints running back turned 15 fumble-free carries into 158 yards and a 75-yard score, and he also caught a 5-yard touchdown pass from Drew Brees to help power New Orleans’ 41-23 win over the San Francisco 49ers.

Backup Tim Hightower, who replaced Ingram last week, rushed 23 times for 87 yards and a touchdown. Overall, the Saints rushed 42 times for 246 yards and two scores, while Brees completed 28 passes for 323 yards and three touchdowns. New Orleans dominated on offense, and Ingram—who bounced back from a tough week in impressive fashion—led the way.

The Ravens snapped a four-game losing streak and took the lead in the AFC North by beating their biggest rival. Former Steeler Mike Wallace produced a 96-yard touchdown in the first quarter, and the Baltimore defense frustrated Ben Roethlisberger just long enough for the Ravens to escape with a 21-14 win over the Steelers.

After three quarters, Roethlisberger—who was playing in his first game in almost a month—had just 54 passing yards. With the Steelers offense stuck in neutral, the Ravens extended their lead to 21-0 on a blocked punt returned for a touchdown early in the fourth quarter. Roethlisberger’s late surge wasn’t enough to overcome Baltimore’s three-touchdown advantage, and the Ravens escaped with a win they had to have.

It was Murray—not Derek Carr—who starred in the Raiders winning their biggest game in years. His 114 rushing yards and three touchdowns—the most by an Oakland running back since 2010—represented the difference in the Raiders’ 30-20 victory over the defending Super Bowl champion Denver Broncos on Sunday night.

Murray scored all three touchdowns from just one yard out, including a pair of 1-yard scores in the second quarter. He also busted off a 42-yard run in the first half, and added one catch for 13 yards. Now 7-2, the Raiders are in sole possession of first place in the ultra-competitive AFC West.