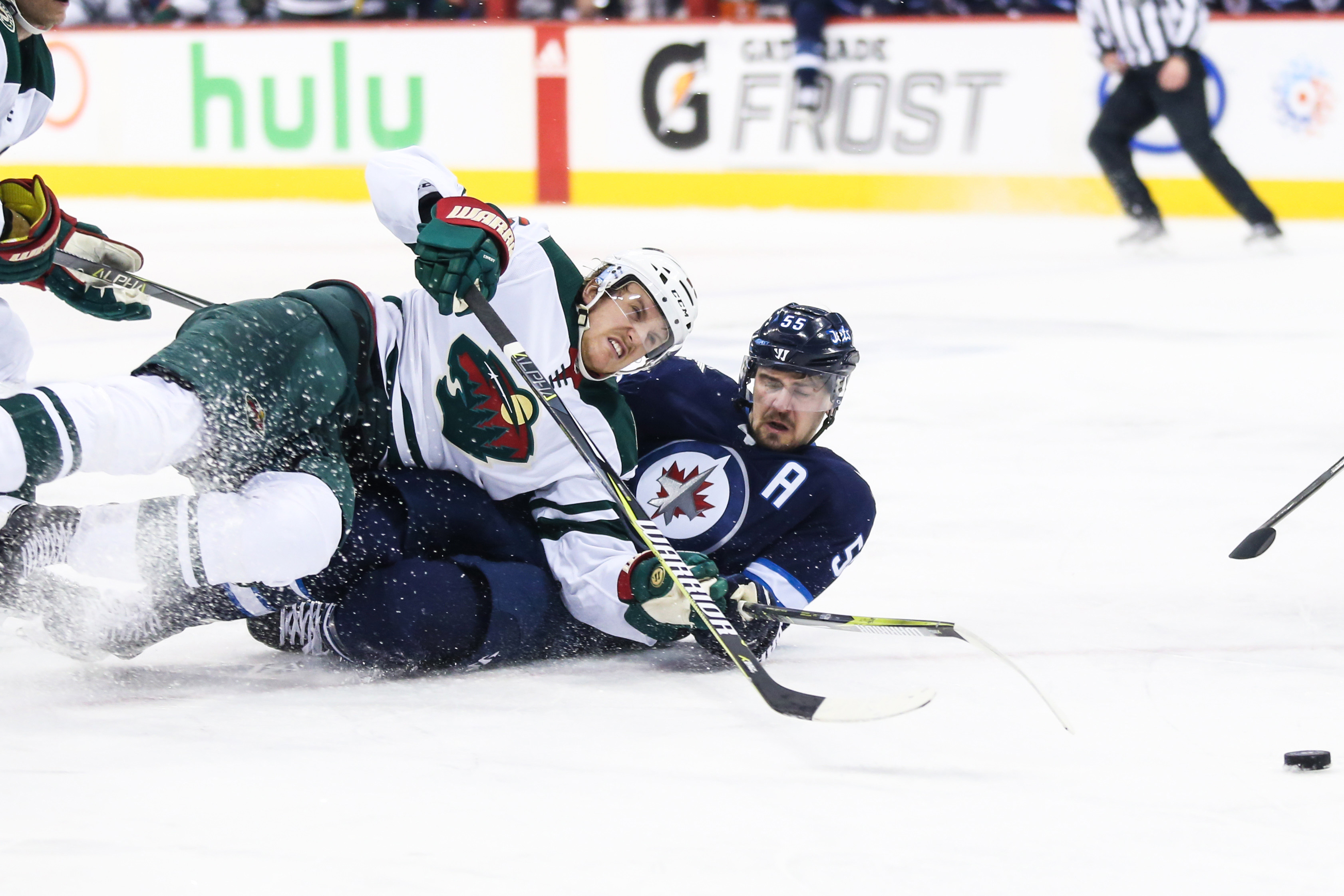 The ‘Sea of Red’ the ‘White Out’ are all great fan traditions that we’ve seen from clubs like the Calgary Flames and the Winnipeg Jets as they try to amp up the team spirit in the post-season.  The Tampa Bay Lightning used to have their annoying “Thunder sticks” and Pittsburgh sports clubs basically recycle the ‘Terrible towel’ whenever their team makes a post-season run.  In Minnesota sports history, you really have the ‘Homer Hankie’ and that’s about it.  I still have both of my ‘Homer Hankies’ from the Minnesota Twins World Series runs of 1987 and 1991 respectively.  What might the Wild do to try to set themselves apart?  A ‘green out’ sounds kind of lame.

How about a ‘Bad Santa’ type of idea where the Wild embrace their color scheme and go with a Red, Green and White out.  Red for the upper deck, White for club level, and Green for the lower bowl?  Sound good Wild fans?!?!  I am sure they will be more enthusiastic about such an idea if the team can earn a big road victory tonight in Winnipeg; can the Wild make that happen?

1st Period Thoughts:  Minnesota clearly did not want to sit back and wait for the Jets to attack to start this game.  The Wild were moving their feet well early, out of necessity as Blake Wheeler took off for the Wild zone in what looked like a 2-on-1 only to be stymied by a great backcheck by Jared Spurgeon.  Minnesota would try to press the attack with its 3rd line of Matt Cullen, Jordan Greenway and Charlie Coyle moved the puck quickly to create a chance off the rush for Coyle who let go a wrist shot that was deflected up and over the goal by the glove of Connor Hellebuyck.  A a few minutes later, as Greenway would draw a tripping penalty by Tyler Myers.  On the power play the Wild moved the puck around the perimeter as they tried to set up Matt Dumba for a few blasts near the left faceoff dot.  Hellebuyck wasn’t screened so he had a fairly easy time steering those shots wide of the goal.  The Wild would work a play into the slot to Jason Zucker who appeared to get the puck to his forehand but he’d work it to his backhand where he sort of spun and let go a shot that Hellebuyck covered up.  The Jets decided to ramp up their physical game; finishing checks consistently and it appeared to have the desired effect of slowing the Wild down.  Minnesota was slowing up to side-step hits where they could and the Jets seemed content to just tenderize the Wild as much as they could.  Perhaps sensing their own reduction of pace; the Wild would try to weather the checks and press the issue a bit offensively.  The hits kept slowing Minnesota down but they weren’t shying away from the contact like they did during the middle of the period.  The Wild had to be pleased to come out of the period unscathed but frustrated they were not able to generate more quality scoring chances than they did.  Devan Dubnyk wasn’t that busy, and Minnesota did a decent job of keeping the Jets to the perimeter.  Minnesota is certainly leaning on Dumba and Jonas Brodin a lot; probably too much at this point in the game.

2nd Period Thoughts:  One could be forgiven for wondering who on the Minnesota Wild took a penalty at the end of the 1st period as it appeared the Jets were on the power play for nearly the 1st two minutes of the 2nd as Winnipeg operated with impunity in the offensive zone.  Minnesota seemed skittish and hesitant and even when they had time they were just flipping pucks out of the zone instead of making decent passes.  It wasn’t until the four minute mark that the Wild finally managed to skate into the Winnipeg zone.  Minnesota would get another power play as Myers was called for roughing.  On the man advantage it was clear no one on the Wild wanted to being in around the crease and that meant Hellebuyck had an unobstructed view of the puck making the perimeter shots fairly simple to stop.  The weak effort continued as Dustin Byfuglien forced a puck battle along the wall and three Wild forwards converged on the puck along with two Jets’ defenders and Minnesota got outworked for the biscuit and Winnipeg was able to clear the zone.  Shortly after Myers penalty the Wild would again get bottled up in their own end, unable to clear the zone and the puck ended up on the stick of Myers who had Zucker chasing after him and he’d use his 6’7″ frame to protect the puck as he fired a wrist shot that beat Dubnyk.  1-0 Jets.  The Jets crowd was feeding off the physical play as Wild players were getting lit up all over the ice; including two big hits behind the Winnipeg goal on Mikko Koivu and Greenway.  The Jets had some other dangerous opportunities as Patrik Laine who forced a few turnovers but he’d rip a shot high over the goal.  Minnesota had to feel fortunate to only be down by one going into the 2nd intermission.  The Wild had to be more than a little frustrated after being out hustled and out played that period.  Long change or not, the Wild were not 100% all in and that’s not going to cut it in this series.

3rd Period Thoughts:  The 3rd period started out a little better as the Wild tried to juggle their lines looking for some kind of spark.  The Wild were trying, but despite their efforts all they were able to create were mostly unscreened shots from the perimeter.  Minnesota looked tired as they barely had enough energy to chase the puck let alone win any races to it.  Winnipeg continued to hit and hustle and Minnesota would eventually get worn down.  The Jets would strike mid-way through the period as Byfuglien carried a puck down low where he fed a pass out front to Paul Stastny who outmuscled Joel Eriksson Ek for space and he’d get off a quick shot and by Dubnyk.  2-0 Jets.  A few minutes later the Jets would add another as a lazy turnover by Coyle turned into a pass by Bryan Little to a crashing Andrew Copp who managed to lift a puck over the shoulder over Dubnyk.  3-0 Jets.  The Wild would have a token shift as Greenway demonstrated his size and strength down low, he’d help set up Eric Staal near the crease but Hellebuyck was able to make the stop.  The Jets would add another goal as Laine held the zone where he fired a shot that deflected off the backside of Nick Seeler and by Dubnyk.  4-0 Jets.  Minnesota would bust the shutout on a late power play as Koivu stepped into a slap shot that was redirected by Zach Parise and in.  4-1 game.  In the final 10 seconds, tempers would boil over as Wild took issue with a little shove after the whistle by Byfuglien and Daniel Winnik would get tangled up with Brandon Tanev.  After sort of shoving each other for a bit, Tanev and Winnik would drop the gloves.  The bigger Winnik would dominate the fight as he kept pounding away for a clear win that drew the ire of the home crowd.  The fisticuffs wouldn’t end there as after a lengthy break to figure out the penalties, tempers would flare again as Seeler dropped the gloves with Ben Chiarot.  It was more of a wrestling match than a fight and while the broadcasters gave the Wild some kudos for showing some fight it seemed pretty pointless to me.  Wild lose 4-1, unable to muster a shot in the first 15 minutes of the 3rd period.

Devan Dubnyk was again pretty good making 39 saves in the loss.  The first goal was a bit soft, but he made a number of fine saves to keep the Wild in the game probably far longer than it deserved.  Defensively, the Wild were forced to lean too heavily on Matt Dumba and Jonas Brodin who looked exhausted by the time the team opened the 3rd period.  If there was a bright side, the Wild didn’t surrender a power play goal this evening.

Offensively, the 3rd period almost serves as an indictment to the team.  Minnesota did not manage a shot on goal through the first 15 minutes in a game where they started the period down by just one.  Part of that was exhaustion from chasing the puck all over the ice but part of that was a team that did not seem to really want to pay the price to work their way in close to score.  Jason Zucker, Eric Staal were mostly missing in action as they were in game 1.

Minnesota returns to St. Paul in a familiar place, trailing 2-0 in the series and in need of a victory and the confidence that goes with it.  The fights at the end of this game are meaningless unless the team digs deeper and battles with more tenacity in Game 3.