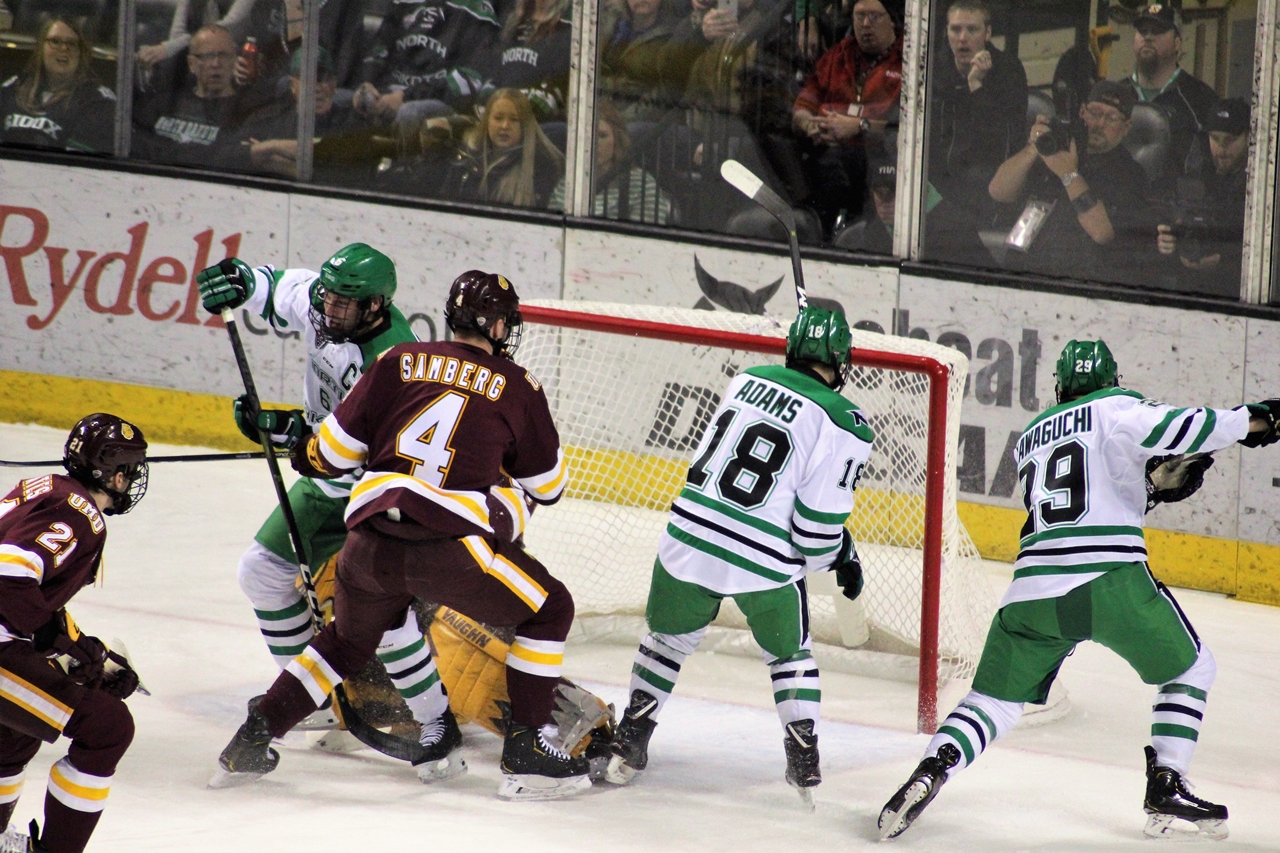 Winning games in the National Collegiate Hockey Conference isn’t easy by any stretch of the imagination. Every game is a battle. Every conference series is a civil war. You’ve got to play disciplined hockey to win in this league.

Stay Out of the Penalty Box

You can’t have a parade to penalty box against good teams and expect to win. They’ll bury you. If you take a penalty, you’ve got to kill them. On Saturday night, the Hawks penalty kill gave up two power-play goals in five chances. That was the difference against the Bulldogs. Those two power-play goals resulted in a 3-2 loss.

“I think we took a little bit to get ourselves into it,” Poolman said. “They came out with some jump. I didn’t mind our start, but they came out a bit more grimy than we were. That’s our game. We got to outwork teams at this point of the year and they took it to us between the first and the second (periods). They got those five on threes and we obviously can’t give that up. That’s just so mental and came back to bite us.

“PK was pretty good last night and tonight is it’s pretty tough when you try to kill a five on three the first five minutes and then again (later in the game). So, it’s something we can’t have that and got to roll five guys, four lines, 60 and we didn’t do that. I think some guys got tired and we didn’t get everyone in the game and we couldn’t muster too much at the end there so that’s that was kind of the result.”

Post-game, head coach Brad Berry agreed with his captain, “Two five-on-threes. Two five-on-three goals against. A lost drawn in our end. That’s the difference. They were ready to go and I don’t think we had the start that we had in the last four or five games and again like I said, we can’t take those penalties, and discipline is a big thing. Again, you can’t put a team like that on the power play especially two five-on-threes.”

I know the fans are getting frustrated with the way the season has played out. With that said, there are some positives that you can take from this series. The last two weeks, the hometown team has played pretty well against nationally ranked teams above them in the standings. Their downfall, they’ve taken untimely penalties, at key moments in the game. That can be fixed.

Moving forward, the Hawks have to win to get in. They’ll need to win at Denver. Get to the Frozen Faceoff and then win the championship. That’s still within their reach. Against SCSU, DU, WMU, and UMD went 3-4-1 (.4375).

“Well, I think we’re in a situation where we probably want to be higher in the standings and the pairwise, all that stuff, but the biggest thing for us is playing consistently game in and game out,” Berry said. “We’re playing hard but we’re losing games on small details. Power play, penalty kill, discipline, losing a face off and it’s in the back of our net. We’re scratching and clawing. But again, we got to be cleaner in a few different areas going forward here.”