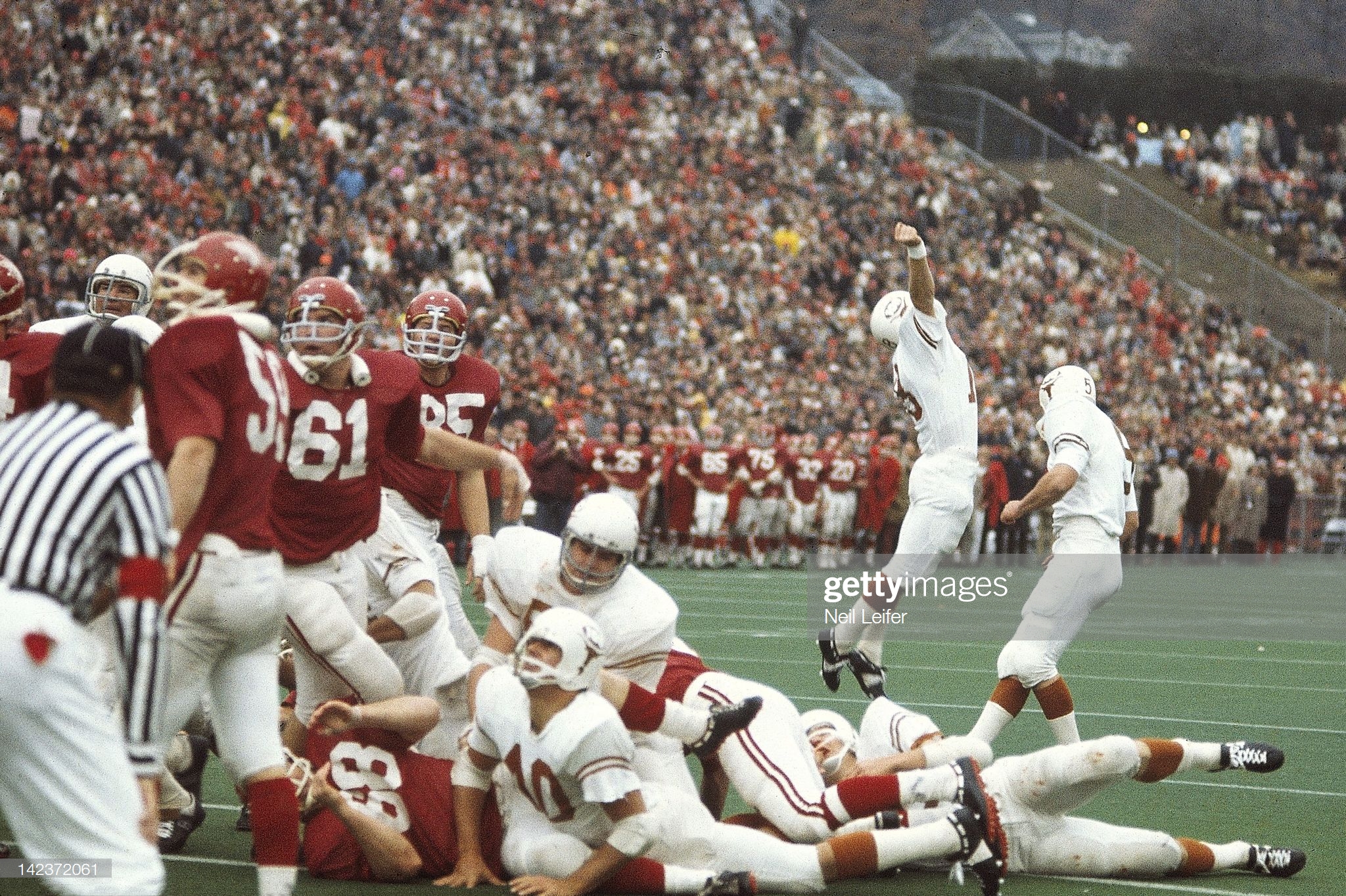 There have been a number of memorable match-ups of No. 1 vs. No. 2 throughout the years, but the one that occurred on this day 50 years ago led to the President of the United States declaring a national champion.

Both teams were 9-0 as No. 1 Texas invaded Fayetteville to take on second-ranked Arkansas on Dec. 6, 1969. The Longhorns trailed most of the way, but scored 15 fourth-quarter points to pull out a 15-14 victory.

Texas would turn the ball over six times on the afternoon, including on the second play from scrimmage. The miscue allowed Arkansas to find the end zone less than 90 seconds in as Arkansas’ Bill Burnett leaped into the end zone for what would account for the only points of the first half.

The Razorbacks would double their lead with more than nine minutes to play in the third quarter when quarterback Bill Montgomery found Chuck Dicus for a 29-yard touchdown to extend the advantage to 14-0. Entering the game, the Arkansas defense had yielded fewer than seven points per game through three quarters, Texas was kept off the scoreboard.

That changed one play into the final period as quarterback James Street broke multiple tackles and scrambled 42 yards for a touchdown. Street would keep the ball on the 2-point conversion try and lunged into the end zone to cut the lead to 14-8.

Street’s efforts looked as though they would do little more than break up the shutout as the Razorbacks moved from their own 20-yard-line to the Texas 7 on the ensuing drive. To that point, Arkansas had not turned the ball over, but Montgomery made a critical mistake when he forced the football into coverage in the end zone and was intercepted by Texas’ Danny Lester, who returned it to the 20-yard-line.

With less than five minutes to go, the usually conservative Darrell Royal elected to go for it on 4th-and-3 from the Texas 43-yard-line. On the play, Street would hit a diving Randy Peschel for a 44-yard gain to move the ball inside the Arkansas 15-yard-line. After a run that gained 11 yards, Jim Bertelsen scored from two yards out to give the Longhorns a 15-14 lead with less than four minutes to play.

With the game on the line, Arkansas would march into Texas territory at the 40-yard-line with more than a minute to play, but Montgomery’s downfield throw was intercepted by Tom Campbell and the Longhorns prevailed to clinch the Southwest Conference. Texas finished with 368 yards of offense to 308 for Arkansas. Texas running back Steve Worster finished with a team-high 94 yards rushing in the victory. Montgomery passed for 202 yards for the Razorbacks in the loss.

After the game, President Richard Nixon presented a plaque to Royal and the Longhorns and declared them national champions. The declaration was controversial at the time, but Texas would make it official by rallying past Notre Dame in the Cotton Bowl on New Year’s Day, 21-17.

The comeback win over the Fighting Irish however, wasn’t quite as memorable as the one in Fayetteville less than a month earlier. That contest took place on this day a half-century ago.