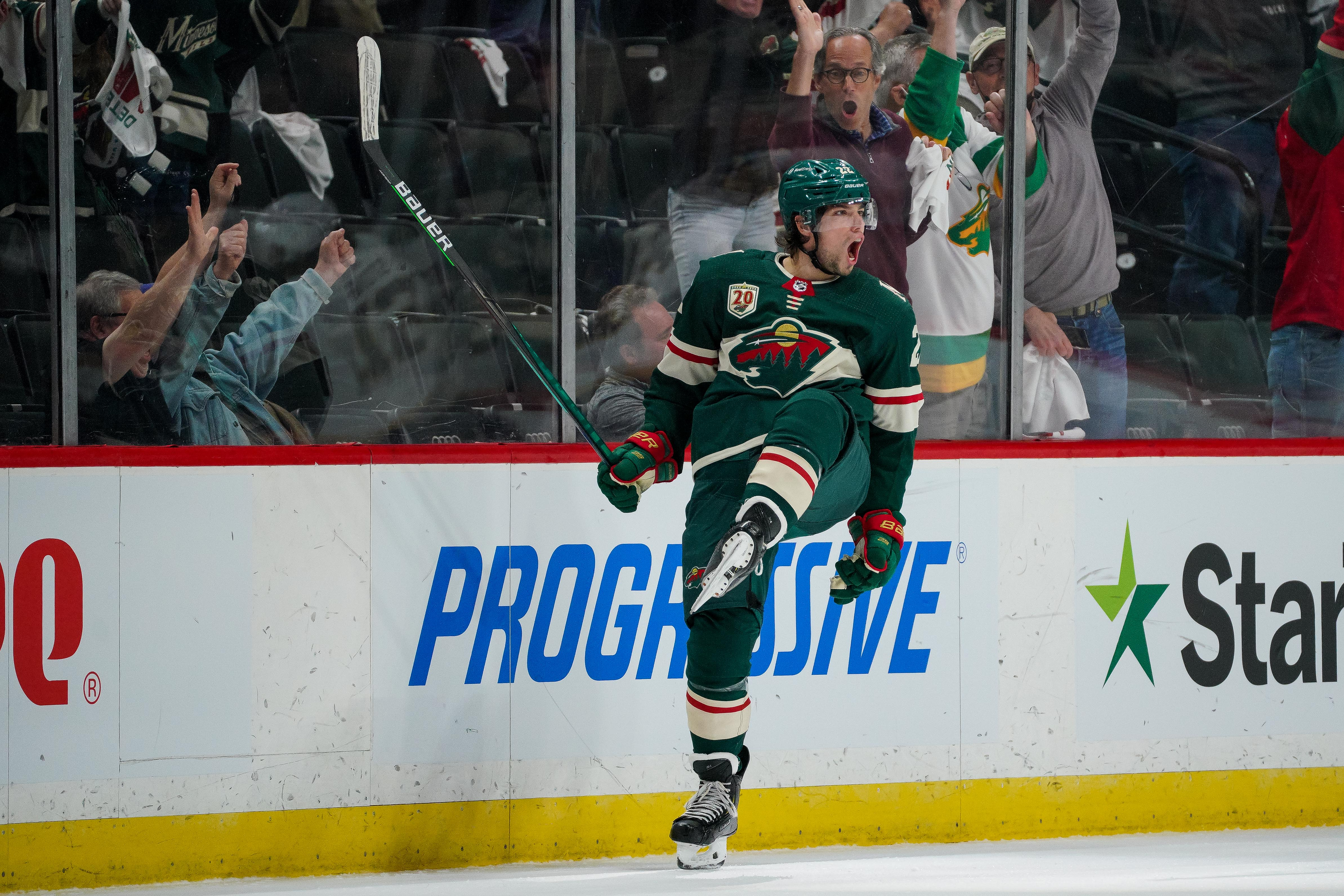 In many professions, there comes a time when your work performance comes under review.  Most of the time, its part of a normal yearly or bi-yearly cycle to have a sit down with one of your bosses and they discuss your strengths, weaknesses and perhaps areas where they think you can grow or any other ‘concerns’ they may have.  I am going to guess that most of you, like myself do not usually enjoy these ‘reviews’ as most of the time and like many people, you rarely remember the positive comments made about your work and instead you dwell on the petty negatives the process dredges up.  Often times, the glowing praise they may have given you seems to be completely unimportant as they use one small moment to downgrade your overall performance.  I wonder if Kevin Fiala would have felt the same way if the Minnesota Wild had brought up every little thing that annoyed them before an arbitrator would’ve made their decision.

Yet the two sides avoided that scenario by agreeing to a 1-year, $5.1 million deal for the team’s 2nd leading goal scorer.  Ever since the team traded for the talented ‘gamebreaker’, he’s been fairly productive, scoring 46 goals, 101 points in 133 games with the Wild.  Given the team’s historic struggles with finding offensive talent, one could understand how ‘petty’ criticisms about turnovers was something he’d rather avoid.  Honestly, if you could avoid a review by just agreeing to some kind of compromise ‘grade’ on your performance would you rather accept that and avoid the ordeal of that process?  I’m sure at least some of you would.

The deal means he will have another season to bet on himself and prove he’s worthy of a long-term deal by the Wild as he will still be a restricted free agent (who still has arbitration rights) next season.  That means the Wild still have that coveted exclusive negotiating window and hopefully it provides the opportunity to keep Fiala in the fold for the long term.  However that is not going to be without some challenges as the team will start to feel the cap crunch of $12.7 million in dead money from the twin buyouts of Zach Parise and Ryan Suter.  So if the team were to offer a long-term deal to Fiala it may prompt other roster moves to be able to afford the contract.  Effectively the Wild bought themselves another year to consider its options.  Fiala’s contract leaves the Wild with $13.1 million in cap space for the 2021-21 season which leads us to discuss ‘the elephant in the room.’  Since the team is expected to offer Kaprizov around $9 million per season, does that mean the $4 million in cap space that would be left over gets used to bring in a center via trade?  Possibly, but I doubt it because of the cap crunch that begins next year. 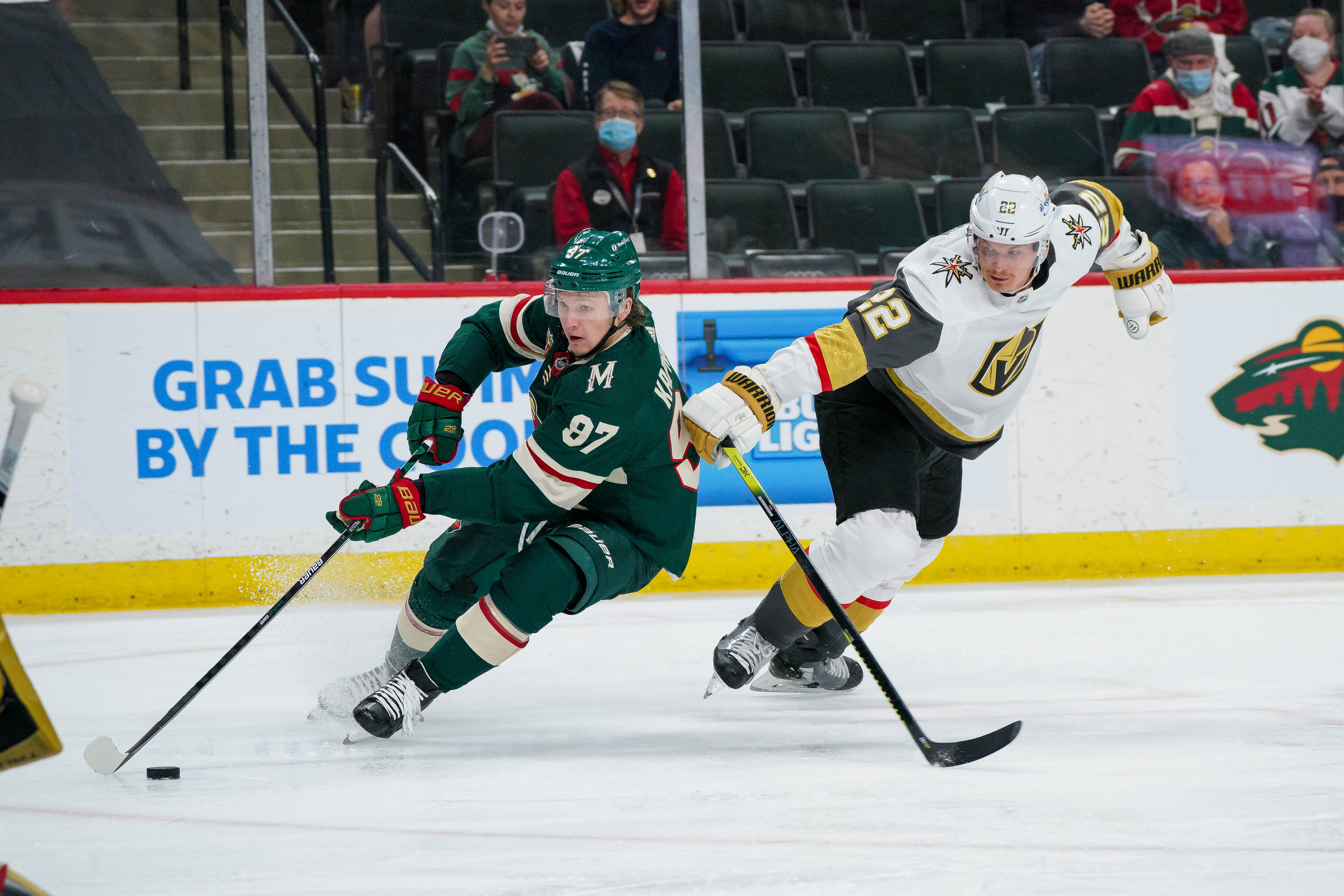 The Athletic‘s Michael Russo pointed out early in the process to get Fiala re-signed, that the winger likely felt a bit perturbed by the way the Minnesota Wild was handling his contract compared to how they handled the deal they gave Joel Eriksson Ek and how seem to be handling Kirill Kaprizov.  Kaprizov, with just 55 NHL games under his belt was getting offered an 8-year contract with an average cap hit of $8 million dollars.  Fiala instead was taken to arbitration by the Wild who was more than willing to nitpick to drive his asking price down from his want of around $6.2 million per season.

I think its only natural for Fiala to feel a bit resentful of that kind of a double-standard, especially after being a productive player the last two seasons on lines that seemed to always be in a constant state of flux.  Let us not forget that this contract makes him (currently) the 3rd highest paid forward on the team behind Mats Zuccarello and Eriksson Ek.  And as Wild General Manager Bill Guerin admitted to the Athletic, there are likely fences still to mended between the two before a long-term deal is to be consummated.

“We had a good chat.  I’m sure we’ll talk when he gets back into town.  Hey, look, those are things that as a player, you have to understand.  This is a business.  It’s not a personal attack.  It’s not, ‘We don’t like this guy, we like that guy more.’  It’s a business and we have a salary cap, a budget, and a pay structure that we have to follow in order for us to be successful and that’s what we’re doing.  Lots of players go through this.  I don’t look at it as a slap in the face, and if somebody does, then, great, prove us wrong.” ~ Wild GM Bill Guerin

Remember what I said about trying to avoid the pain of a review?  Well Guerin just gave it to Fiala even though they avoided the painful process by signing a day before arbitration set to commence.  A person can try to convince you that it isn’t a personal attack, but it is pretty tough for anyone in Fiala’s situation to simply pivot and agree with your boss on this one.  Especially when your boss couldn’t acquire a top 6 center to give you some much-needed support.

So now all of the attention of the Wild is on inking a deal with its other restricted free agent, where the 24-year old reigning Calder Trophy winner apparently is working out rigorously to prepare for the 2021-22 season.  Honestly, the saga between the Minnesota Wild and Kirill Kaprizov would give most plots on Days of Our Lives a run for its money.

Do you remember the first 3 years when the Minnesota Wild just couldn’t seem to find a way to meet him.  Even when he came to Canada to play in the U-20 World Junior Championships, all then Wild GM Chuck Fletcher could manage was a brief meeting with Kaprizov’s girlfriend.  Then over the course of the next few seasons were a few dinners with Fletcher, then Paul Fenton and lastly current GM Bill Guerin.

Each time, the team did its best to court the talented Russian as he played through his Kontinental Hockey League contract after winning a Gagarin Cup with CSKA Moscow.  Then the pandemic, and a decision by the league to not allow Kaprizov (and other players from outside North American leagues) to play ‘in the bubble’ which meant the Kaprizov would ‘burn’ the first year of his 2-year Wild contract from the press box.  With the pandemic still dominating how we live our lives, Kaprizov shined in a truncated NHL season and won rookie of the year honors by scoring a team-high 27 goals, 51 points in 55 games.  Wild fans couldn’t get enough of him.

Then the team was bounced from the playoffs after 7 hard-fought games against the Vegas Golden Knights and focus turned to trying to secure the Russian star to a long-term deal.  As we all know, that’s when everything seemed to go sideways.  The team even tried to make an offer towards the end of the shortened season but was rejected.  Since then the team has made additional offers of an 8-year deal that would pay him $9 million a season but those two have been dismissed by Kaprizov and his agent Paul Theofanous.

Since then, it has been a bit of a public relations battle between Kaprizov and the Minnesota Wild.  Guerin has played the role of the calm poker player exuding confidence that a deal would be done, while Kaprizov’s camp has trolled the team a bit especially as news broke of possible 10-figure deal made by his former KHL team, CSKA Moscow.  Many were quick to point out that the KHL’s salary cap is a little over $14 million, so it seemed pretty unlikely to take such a story all that seriously.  I asked Wild fans who they felt was to blame for this stalemate between the Wild and its star winger and I got a pretty fair sample size of responses with over 350 votes on the poll I had open on Twitter for 5 days.

Clearly many Wild fans felt the agent was the main culprit for the process to continue as long as it has.  However, it ignores the fact long before Theofanous was ever his agent that the team has never had anything go simple and easy with Kaprizov.  Since the team drafted him in 2015, mundane matters (such as simply meeting the player) have been complicated and drawn out.  He’s had at least 3 different agents since the team drafted him, so one would think Kaprizov has certainly endorsed this sort of strategy.  I even wrote about this standoff a few weeks ago.

However according to the Athletic, there may be signs that progress is finally being made between the two sides.  However nothing specific has been mentioned other than Guerin saying that Kaprizov’s deal will be longer than Fiala’s.  So all that can be done is to wait and see.  Whether that reaches a conclusion before Wild training camp is set to open in September.  Until then, its like sands through the hourglass, so are the Days of our Lives!