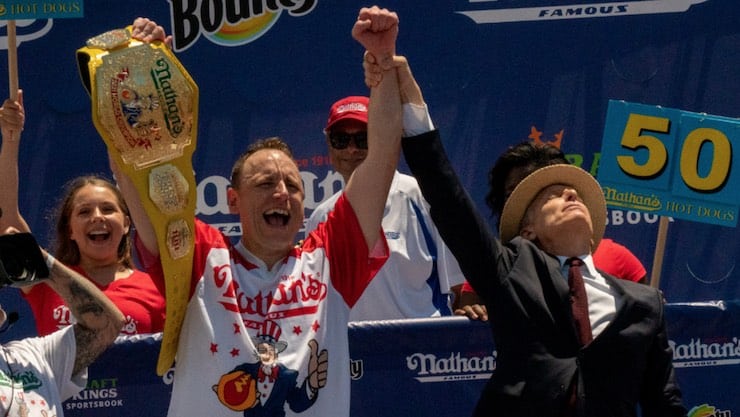 A 14-time winner, Joey Chestnut has the best chance to win Nathan’s Hot Dog Eating Contest in 2022. The betting favorite at the top online sportsbooks, Chestnut added to his list of world records with his performance on July 4th last year. In this article, we’ll review Chestnut’s chances to win the hot dog eating contest in 2022, some of his world records, and why he’ll ultimately take home the Mustard Belt.

Joey Chestnut has a 96.77% chance of winning Nathan’s Hot Dog Eating Contest for the seventh time in a row. After setting the new world record by eating 76 hot dogs, the 14-time Mustard Belt Champion will head to Brooklyn, New York with -3000 odds to win the annual hot dog eating contest. Scroll down below for more information about Chestnut’s chances of winning the 2022 Nathan’s Hot Dog eating contest.

After breaking the world record last summer with 76 hot dogs and beating all of his competitors by at least 20 hot dogs and buns, Chestnut appears poised for another record-breaking event.

Check out the table below for the implied probability of Joey Chestnut winning the 2022 Nathan’s Hot Dog Eating Contest.

Chestnut is the greatest eater in history. He holds over 55 records, including the world record for most hot dogs. At Nathan’s Hot Dog Eating Contest, Chestnut devoured 76 hot dogs and buns in 10 minutes, breaking his own world record. While that number is impressive, he’s put up some truly jaw-dropping numbers in his Major League Eating career.

Below we’ll break down some of Chestnut’s most notable world records..

Chestnut has been untouchable since taking the Mustard Belt in 2007 from Takeru Kobayashi.

In fact, he’s only lost one title during his 15 year reign to Matt Stonie in 2015. Since then, Chestnut has won six hot dog eating contests in a row and will look to defend his Mustard Belt once again this weekend.

While bettors might shy away from laying -3000 odds with Chestnut at the 2022 hot dog eating contest, there is a good chance that legendary eater will come away victorious.

In his 15 year reign, Chestnut has reached the 70 hot dog mark six different times. Last year, he beat his own 2020 world record, downing 76 hot dogs. He has the highest chances to win and has been unbeatable in 13 of the past 14 hot dog eating contests.

Look for another Mustard Belt title to be handed to the greatest eater of all time, Joey Chestnut, on July 4, 2022.