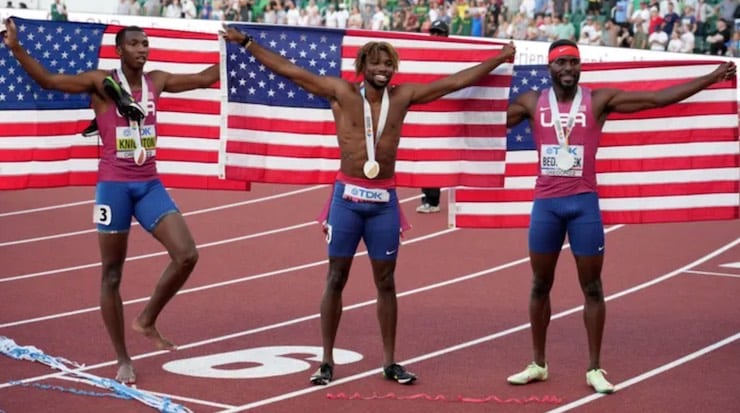 Lyles’ performance came just 15 minutes after Jamaican Shericka Jackson posted the second-fastest time ever. At 21.45, Jackson clocked in behind only Florence Griffith-Joyner’s 21.34 time in the 1988 Olympics.

Following a bronze-medal performance in the 2021 Olympics, Lyles bounced back with a 200m time of 19.31 at the world championships, shaving .01 off of Michael Johnson’s record from the 1996 Olympics.

Lyles crossed the finish line with an unofficial time of 19.32 before it was changed to 19.31 on the scoreboard clock.

In a BBC interview, Lyles said the biggest difference for him this year has been the fact that he’s put less pressure on himself in 2022.

Lyles 200m Time Is The 4th-Fastest Ever

He is also the third-fastest man to ever run the 200m.

Team USA swept the podium in the 200m at the 2022 world track and field championships for just the second time ever.

The only other time Team USA swept the podium in the 200m was 2005 in Helsinki.

It also marked the second time that Team USA swept the medals this year.

Lyles Thrives Off Of Home Crowd

After the race, Lyles said he felt like a rock star running in front of the home crowd at Hayward Field in Eugene, Oregon.

After Lyles’ masterful performance, let’s go over the fastest 200m times ever.