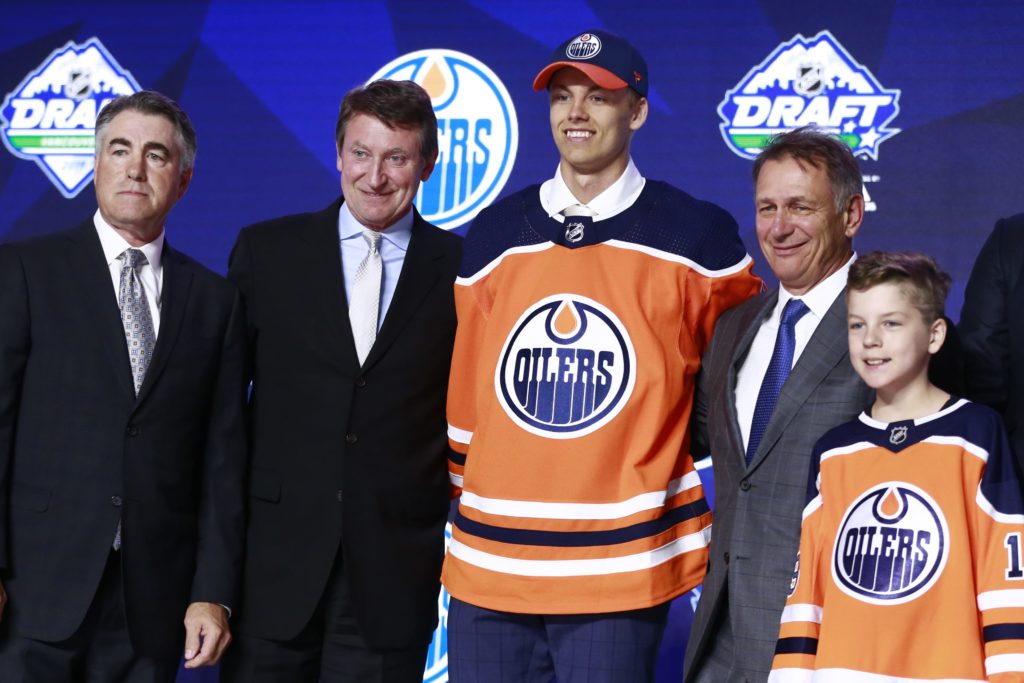 The 2019 NHL Entry Draft is now behind us. The Edmonton Oilers made six selections, including the 8th overall pick. With new top prospect Philip Broberg and the rest of the 2019 draft class off to Edmonton for development camp on Monday, the front office can turn its attention to the NHL roster.

The Oilers didn’t make any trades on draft weekend, but sources indicate that it wasn’t for a lack of trying. The Oilers had numerous conversations with teams, including the Montreal Canadiens, San Jose Sharks, Vancouver Canucks and Arizona Coyotes.

With Montreal, it is believed that the conversations surrounded D Kris Russell. The veteran defender has two seasons left on a contract that pays him $4,000,000 per season. The Canadiens are looking to add a veteran defender to their depth chart and have sniffed around Russell.

They aren’t the only club with interest in Russell. I believe the Philadelphia Flyers sniffed around the veteran prior to their trades for Justin Braun and Matt Niskanen. There is a market for the Russell, and if the Oilers get an acceptable return they will deal him in the coming days.

It’s my belief that Russell, a solid but overpaid NHL’er, is Holland’s top choice to move out on defense. A Russell trade not only would create cap space, but would open a roster spot for a prospect like Caleb Jones, Ethan Bear or even Evan Bouchard.

Jesse Puljujarvi, who officially requested a trade last week, was not dealt this weekend. The Oilers had numerous conversations, but no acceptable return was presented. The Oilers are planning to extend a qualifying offer to Puljujarvi on Monday, keeping his rights with the club.

The team is also fully prepared to allow Puljujarvi to play next season in Europe. They are also holding out hope that the young Finn will change his mind and give it another go with a new General Manager and coach in town.

Contrary to other reports, the Pittsburgh Penguins are not interested in the forward. The Boston Bruins and Washington Capitals, however, are interested. With the Bruins willing to trade F Danton Heinen, it’s possible the two clubs could connect on a trade. The Bruins would likely need to add another asset, probably a draft choice.

Total speculation on my end, but does a deal with St. Louis centered around Puljujarvi and Robby Fabbri make any sense?

Expect the Oil to pursue pending UFA F Joonas Donskoi when the courting period officially opens at midnight tonight. The club would like to add the Finnish forward to play a middle-six role, likely on a revamped third line. The club will try and bring him to town this week for a visit.

The Oil are also interested in two other free agents who faced off against each other in the playoffs. Washington’s Brett Connolly and Carolina’s Petr Mrazek are on the wish list of Ken Holland.

Connolly would be tasked with filling a top-six role, likely second line, should they sign him. Mrazek, on the other hand, would be tasked with competing against Mikko Koskinen for time in net. TSN’s Pierre LeBrun reported last week that the Oilers attempted to acquire the goalie’s rights from Carolina.

If the Capitals don’t extend a qualifying offer to Andre Burakovsky, expect Edmonton to have real interest in him as a UFA. The former Erie Otter is familiar with Connor McDavid and would bring some needed speed and skill to Edmonton’s forward ranks.

The Milan Lucic trade winds have not quite died. Although the power-forward was not dealt at the draft, the expectation is still that he will be moved in the coming days. The potential to go to Vancouver is still very much there, with Loui Eriksson still the likely return.

Another option is the club waiting until July 2nd, when Lucic’s bonus is paid. That will open up more trade possibilities to teams that are working on a budget. In the end, I still suspect he ends up in Vancouver.

Jason Gregor of TSN 1260 reported on Friday that the Oilers will not extend qualifying offers to F’s Ty Rattie and Tobias Rieder. Neither is a surprise, and I wouldn’t expect either of them to return next season. We could see Rattie playing in Europe.

Remember those Rasmus Ristolainen rumors from late in the spring? Doesn’t sound like the Oilers were involved in those talks this weekend.

Lastly, Darnell Nurse garnered some attention in trade talks this weekend. The Oilers are not shopping the defender, but teams are asking. Among the interested are the Winnipeg Jets. There’s a deal to be made there, as the Jets are open to dealing Nikolaj Ehlers for help on defense.