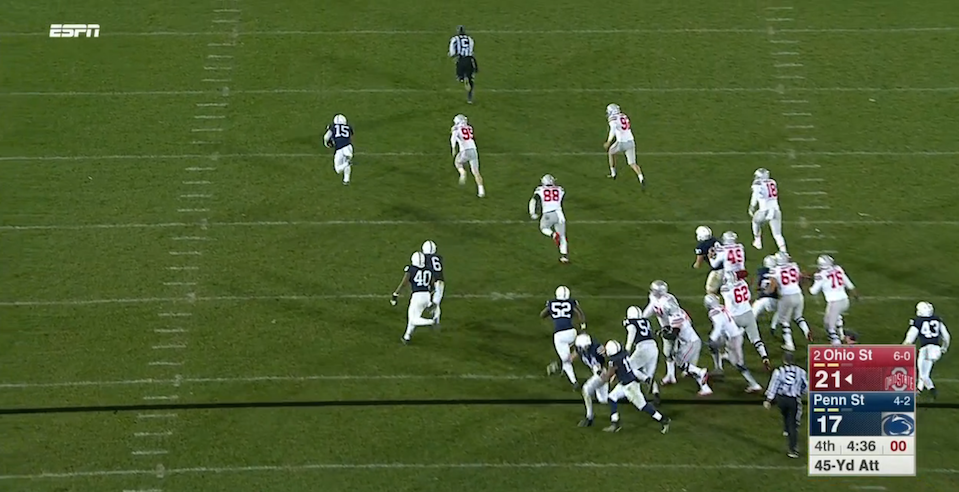 Nobody could have seen this one coming. Even the most optimistic of Penn State fans would have had a hard time making an argument that Penn State would come back from a 21-7 deficit in the fourth quarter against the No. 2 Ohio State Buckeyes, with a solid defense and J.T. Barrett at quarterback and a terrific coaching staff led by Urban Meyer.

Not these Buckeyes, who had won 20 straight road games and were likely the team to beat in the Big Ten.

Not these Buckeyes, who have notched road wins at Oklahoma and Wisconsin this season.

Not in a game that saw Penn State quarterback Trace McSorley complete just eight of his 23 pass attempts.

Not in a game in which Ohio State’s offense was on the field for 15 more minutes than Penn State’s defense.

Not in a game in which Penn State converted just two of 13 third down plays.

But that’s why you play the game.

Grant Haley picked up a loose ball from a blocked Ohio State field goal with under five minutes to play and returned it 60 yards for a touchdown, giving Penn State a 24-21 lead following an extra point. It was Penn State’s first lead of the night, and it was fitting that it came on special teams on what was largely a distasteful night on special teams for both the Buckeyes and Nittany Lions.

Penn State started the game playing well against the mighty Buckeyes, but failed time and time again to put point son the scoreboard. Penn State’s opening drive looked solid until having to settle for a field goal attempt, which was blocked (little did we know this would be some foreshadowing for the night’s big moment). From there, Penn State engaged in a battle of field position, which has typically not been kind to them in recent memory. That strategy looked to play well for the bulk of the first quarter, until Penn State’s John Reid muffed a punt, setting Ohio State up at the Penn State 38-yard line. Brent Pry scored a mild victory in holding Ohio State to a field goal to start the second quarter.

the teams exchanged punts some more until Ohio State finally established something on offense. J.T. Barrett connected down the right sideline with Marcus Baugh, who bounced off Penn Statdefendersrs on a 26-yard touchdown, but the extra point attempt by Tyler Durbin was missed (another omen). After a Penn State three-and-out, Ohio State tacked on a field goal to take a 12-0 lead.

Down but not out, Penn State’s offense could have folded up right there before the end of the first half, but before getting a chance to go three-and-out at a horrible time, Penn State came out of a timeout and chalked up a McSorley 19-yard pass to Chris Godwin on 3rd and eight for a first down near midfield. Two plays later, McSorley hooked up with DaeSean Hamilton for a 34-yard gain to the Ohio State 20-yard line. McSorley then got the Nittany Lions on the board with a 20-yard touchdown pass to Chris Godwin, seizing some momentum going to halftime.

Penn State has had a knack for making things happen in the second half this season, but the third quarter was a bit of a mess for Penn State. On 3rd and 2 from the Ohio State 26-yard line, the Buckeyes ran a play simply looking to pick up a first down, but Mike Weber got a solid block that opened up a lane for the speedy Curtis Samuel, who raced 74 yards to the house for a touchdown, putting Ohio State up 19-7. Penn State’s offense then went three-and-out, but a high snap soared over the extended reach of punter Blake Gillikin and into the end zone, where Gillikin landed on the ball for a safety (beating an Ohio State player to the ball for what could have been a crushing touchdown). That would prove to be a big play, as it turned out. It would be the final points scored by Ohio State in the game, but a 21-7 lead should have felt pretty comfortable for the Buckeyes going to the fourth quarter.

But the Lions, they chipped away.

A huge run by Saquon Barkley followed by a big gain through the air from McSoreley to Saeed Blacknall gave life to the Penn State offense, and two plays later McSorley crossed the goal line on a run to the right. 21-14.

Penn State’s defense then came up with a huge three-and-out, stuffing Weber in the backfield and holding Barrett to a short run on third down after being burned by him earlier in the game in a similar situation. Cameron Brown then blocked the Ohio State punt, giving Penn State a short field to work with as the offense started at the Ohio State 28-yard line. A very questionable horse collar penalty on Ohio State on a takedown of Barkley gave Penn State a first and goal form the 10-yard line, but the Lions would have to settle for a Tyler Davis field goal. 21-17.

Ohio State still had a chance to put this game away. After starting the ensuing possession from their 13-yard line, Ohio State managed to put together a pretty lengthy drive.11 plays, 59 yards taking off just over five minutes of game clock with the lead. Under normal circumstances, this would have been perfectly fine for Ohio State, but that’s when the Penn State defense knuckled down on their side of the field and forced a field goal try from 45 yards out. And it was blocked.

But now the real work is about to begin. Penn State has forced their way into the Big Ten East championship race, although will need some help from Michigan’s opponents, but the mere fact they are in the conversation now going to the last weekend of October is a significant step forward for Franklin and the entire program.

Enjoy it, Penn State fans. This moment has been worth the wait.