Who are the best NHL rookie goaltenders? 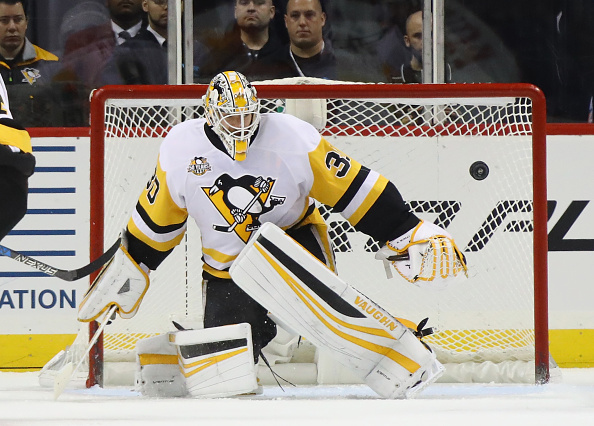 The NHL has had a great deal of success with young players entering the league like Auston Matthews, Patrik Laine, Connor McDavid, and Jack Eichel. Now more than ever, the NHL is a young man’s game, but it has been slower when it comes to the goaltenders. However, thanks to some injuries and poor play, the NHL has seen some young goaltenders break through this year. Here are the best rookie goaltenders in the NHL today.

Matt Murray (Pittsburgh Penguins): Murray is still technically a rookie, but is hardly a conventional one, with his breakthrough coming last season towards the end of the year and then during the Penguins magical postseason run where he was 15-6 with a 2.08 goals against average (.923 save percentage). The 22-year-old Canadian is a former third round pick in the 2012 NHL draft and has a career record of 35-8-3 over 51 appearances with the Penguins with a 2.13 GAA and a sterling .928 SV%. What’s more impressive is how he was able to leapfrog both Marc-Andre Fleury and former Penguins goalie Jeff Zatkoff in a span of a year. Listed at 6-foot-4 and 180 pounds, Murray is not just one of the best young goalies in the game; he is one of the best goalies period.

Juuse Saros (Nashville Predators): A more conventional rookie, the 21-year-old native of Finland has played just eight games in the NHL, but is already making good impressions. After the Predators elected to let Carter Hutton walk in free agency, they let Saros battle with their other young goalie Marek Mazanec and has effectively beat him out. Saros played one game last season, but has played in seven more this year behind starter Pekka Rinne, and been effective, with a career record of 3-4-1 with an amazing 1.50 GAA and a .946 SV%. The 2013 fourth round pick has dominated at every level, and appears to be the immediate future once Rinne begins to fade.

Jared Coreau (Detroit Red Wings): Unlike the other two on the list, Coreau took a difficult road to the NHL, going undrafted and signing with the Red Wings out of Northern Michigan University. Coreau struggled and played most of his first professional season in the ECHL. Things changed in 2015, however, with Coreau earning a strong starting role in the AHL, only to make his NHL debut this season thanks to the injuries to Jimmy Howard. The 6-foot-6, 220-pound Coreau recorded his first career shutout and owns a 3-1-1 record with a 3.11 GAA and .903 SV% percentage. The 25-year-old may not have as much upside, but Coreau has been very effective in his time in Detroit. With the NHL expansion draft coming up, Jimmy Howard could be selected by the Las Vegas Golden Knights, and Coreau could earn a full-time role next season.

Nevertheless, there are numerous goalies who could soon earn more time, like Zane McIntyre in Boston, Kristers Gudlevskis in Tampa Bay, Alex Nedeljkovic in Carolina, and Thatcher Demko in Vancouver. However, Murray, Saros, and Coreau are stepping up and leading the charge of young goalies in the NHL.

Fight of the Day: Aaron Pryor vs. Alexis Arguello I