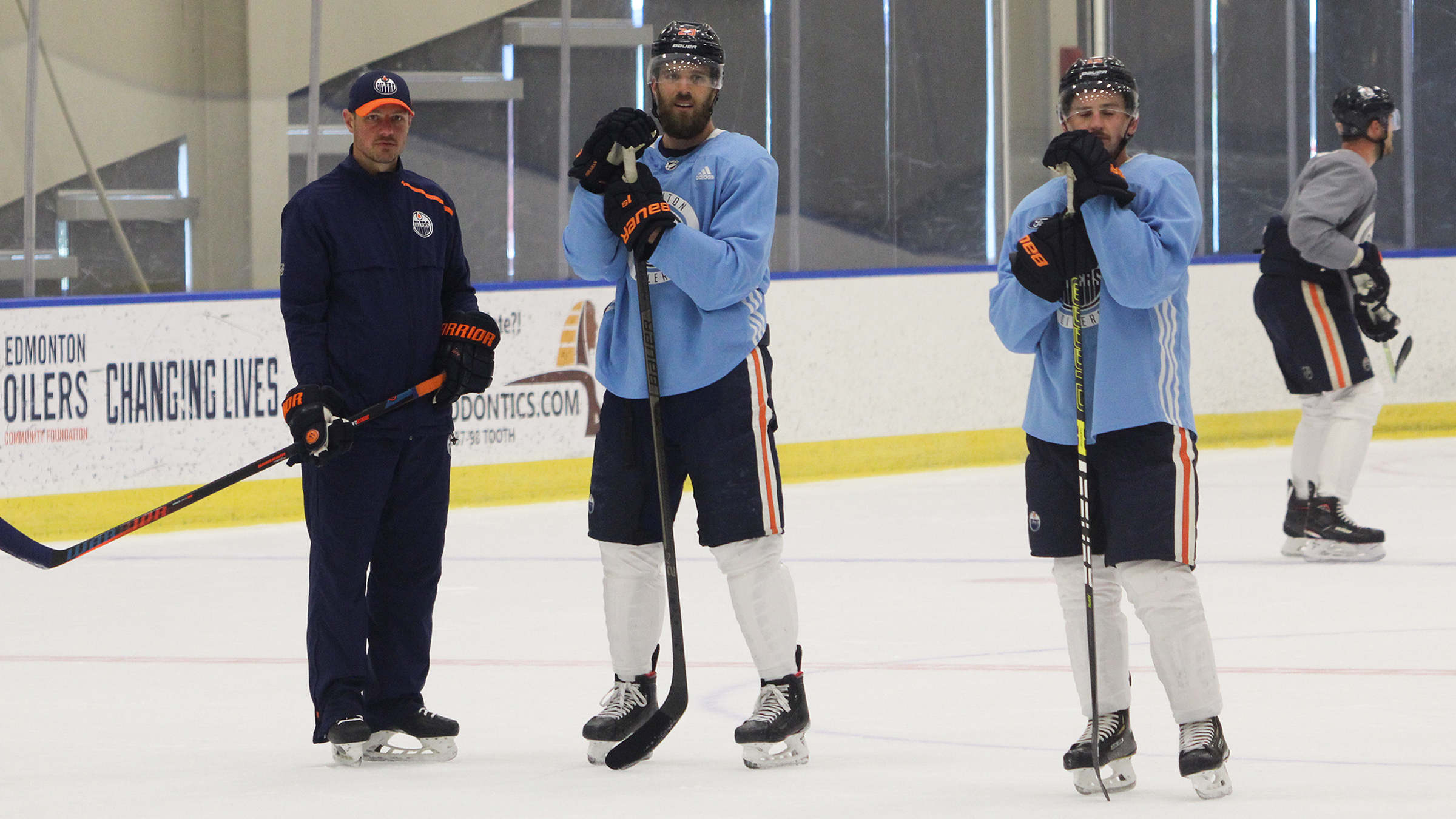 The initial excitement of training camp starting has subsided. Now, it’s truly time to roll up the sleeves and get to work. The Edmonton Oilers took the ice for the third straight day, the second at the Community Arena adjacent to Rogers Place. They also once again held a scrimmage, with a small group skating afterwards.

Here are some of the notes and observations from today, along with a bit of ‘breaking’ news surrounding one of the club’s prospects.

Caleb Jones is still not ready to join the main group at training camp. For the third day in a row, he sat while the rest of his teammates took the ice. Also for the third straight day, Jones laced up the skates and got to work following the main portion of practice.

While on the ice, Jones was again but through a rigorous test by the coaching staff. Today, it was Associate coach Jim Playfair working with Jones on skating drills.

Judging by his heavy workload each of the last two days, Jones shouldn’t be ‘unfit to practice’ much longer.

President of Hockey Operations and General Manager Ken Holland spoke to the media today and revealed what the Oilers final ‘bubble’ roster could look like. Some key clues to determining that puzzle were dropped by the veteran manager.

Holland, per The Athletic’s Daniel Nugent-Bowman, said that the club will only bring three goalies into the bubble. Common sense would dictate that Mike Smith, Mikko Koskinen and AHL Bakersfield starter Stuart Skinner will be the three.

That means both Dylan Wells and Olivier Rodrigue will be cut from camp within the next ten or so days. Not exactly a surprise.

Defensively, Holland said the plan really hasn’t changed after Mike Green opted out over the weekend. The Oilers will carry at least nine of their ten defensemen in camp into the bubble. The lone wild card is Broberg, but the expectation is that he will still be sent back to the SHL. He’ll suit up for Skelleftea for the 2020-21 season.

The plan, as of right now, is to bring a total of 30 players into the bubble. The team plans on three goalies, nine defensemen and 18 forwards. They are allowed 31 total players.

Prospect defenseman Dmitri Samorukov is not yet ready for the NHL. He wasn’t expected to be invited to the summer camp, and still needs some development. With the 2020-21 AHL season on hold until at least December, Samorukov is in search of a place to play.

Reports earlier this summer had Samorukov heading to the KHL on a one-year contract to continue his development and to hopefully play a normal schedule in 2020-21. Nothing was made official until today, when the Oilers loaned him to CSKA Moscow of the KHL.

Samorukov is expected to return to North America for the 2021-22 season after a year back home. The Russian scored ten points (2-8-10) in 47 games with the Condors this past season.

Ken Holland, for what it is worth, is not concerned with this development.

“The most important thing is that he is a developing 20/21-year-old player,” Holland said via Sportsnet last month. “If North American hockey doesn’t start again until December, we’re not sure, he has a unique opportunity here. The KHL is an excellent league and it’s right in his backyard.”

Stick taps to Jason Gregor of TSN1260 and Oilersnation for his report on the Oilers lines from today’s scrimmage. You can (and should) read the full report here.

Team Blue won the scrimmage 4-3 in overtime. Athanasiou, who is excited about playing with the ‘world class’ Leon Draisaitl, scored with 40 seconds left to force overtime. Evan Bouchard had the overtime winner, per Gregor.

On the other side, Tyler Ennis, James Neal and Ethan Bear lit the lamp for Team White.

According to Gregor, the veteran line of Neal with Khaira and Chiasson were strong again. Here’s what he wrote about them in his practice report.

The Neal-Khaira-Chiasson line had another strong scrimmage. Neal scored, and got robbed on a nifty deflection, while Khaira took the puck to the net with conviction on a few occasions. I think they could be a matchup advantage against the Blackhawks’ smaller and inexperienced bottom six.

I tend to agree with Gregor here. The Blackhawks defense is smallish and a weak point. Their bottom-six forwards are young and small. This big, heavy veteran line could absolutely run all over the Blackhawks in the Qualifying Round.

My lone concern with the trio? Speed. If they are heavy on the forecheck and shoot pucks at every chance? They have a chance to very successful.

The Oilers get a day off on Thursday.