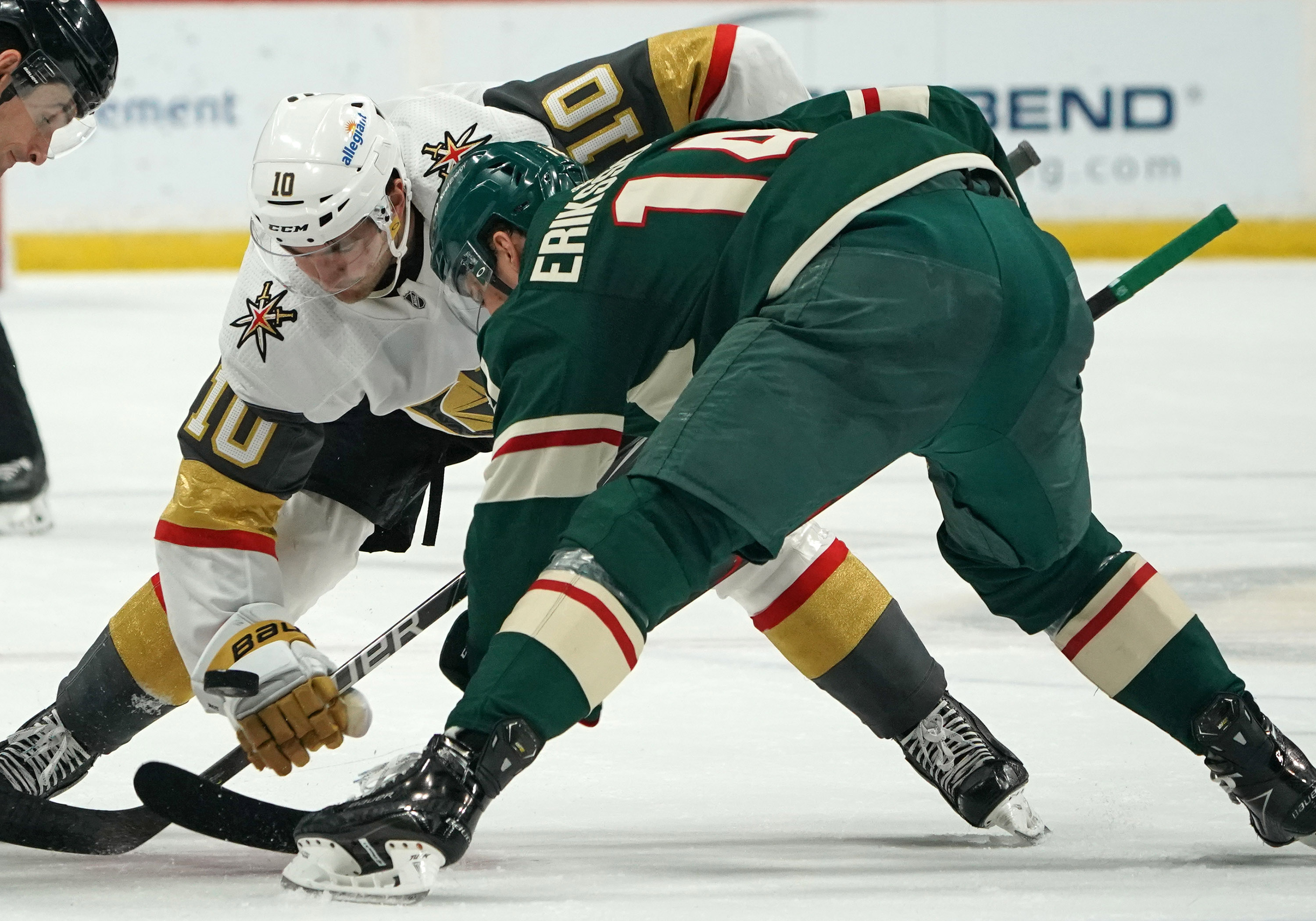 Tuesday night was definitely a night of wanting more. From the first puck drop, we saw a Minnesota Wild that we’ve wanted to see for ages. They were a team that buzzed on the ice. They used their bodies willingly and frequently to make things difficult for Vegas. But sadly, we only got about one period of that energy. Sure, there were moments scattered throughout the second and third periods, but it didn’t match the intensity of that first period. I know it takes a lot of stamina to play a 60 minute game that way, but Vegas played a essentially a patient game, thinking that there was no way that Minnesota could keep that up. And that is what happened. Yet, I like the title character from the Charles Dickens classic Oliver Twist, I want MORE.

So how do we get more? Well, it may take some line or personnel shifting. The line of Jordan Greenway, Joel Eriksson Ek, and Marcus Foligno put pressure on the Golden Knights all game long. Heck, this season finally getting assigned to this line, is probably what has given Eriksson Ek the ability to find his offensive ability. The key though is that he and his linemates need to be more physical. Players like Kevin Fiala are starting to figure this out as well. Tuesday night, he was all over the ice and finishing his checks, then coming back defensively as well to help out his teammates. He was a full package player finally. But not all lines are created equal. Fourth lines tend to be physical lines, but Minnesota’s is not really built that way. Right now, neither Nico Sturm nor Nick Bjugstadhave it in them to play the role we need them to play. Sturm clearly wants to use his speed and scoring ability, but that is getting a bit lost right now on that line. And when it comes to Bjugstad, he’s probably worried that if he plays the more physical, “young man’s game” he’ll find himself back on injured reserve. At this point, I wouldn’t be surprised if we see Zach Parise inserted back into the lineup for his playoff experience or Luke Johnson simply for his physical ability. When it comes to choice, I think I’d rather see Johnson first, simply for his physical play and speed.

The Golden Knights have gotten into the head of Kirill Kaprizov. Coming into the playoffs, he was full of confidence and it showed in his play. He came in, and he was on the lips of pretty much everyone in the league. However, Vegas has sucked the confidence right out of him. Knowing the threat that Kaprizov is, they have him completely shadowed any time he’s on the ice. Now, prior to the playoffs, opposition would shadow him, but he was able to shake them and make things happen. Not now though. Vegas has gone even further than just shadowing him. They are finishing their checks on him and tossing in some cheap shots as well. After a while, that can get in your head, creating a player who looks a bit gun shy. Perhaps what might help boost the rookie winger, would be to put him in Greenway’s spot with Eriksson Ek and Foligno. This would do two things. First off, he’d have two bigger players to come to his defense when needed, but with their larger stature, they would give him some time and space to find his scoring touch again.

Don’t get me wrong. Minnesota overall played a good game on Tuesday night. Had Marc-Andre Fleury not played a fantastic game, the Wild probably would have gone into the first period with a multi-goal lead. Yet as we all know, even when you work your butt off, you don’t always get the result you deserve. That right there explains Tuesday in a nutshell. If Minnesota can come out playing like they did on Tuesday and keep up that pressure for 60 minutes, I think we’ll see a different (and positive) result.

1. Attention to detail on defense ~ The Wild played pretty well in Game 2, but a costly collective brainfart defensively where they got caught puck watching allowed Alex Tuch to get lost and bury the go-ahead goal and Vegas was able to pull away to even the series.  Minnesota frustrated Vegas’ attack by marking opposing forwards whether they had the puck or not and giving the Golden Knights almost no time and space.  Mistakes will happen individually but collectively it can prove disastrous.  No doubt the Wild will watch film of both of Tuch’s goals (which seemed fairly similar in how he got lost by the defensive coverage) and hopefully eliminate that tonight.

2. Deflections and Screens ~ Fleury has been great, but its a lot easier for him to do his job if he has a clear view of the puck.  Minnesota’s lone goal came off a point shot that benefited from a Marcus Foligno screen.  If Fleury is sharp, deflections can thwart his perfect angles or set up secondary chances off of rebounds.  The Wild had great pressure to start Game 2 and they were crashing the net hard which is a good thing, but if they could get some more traffic in front (not just after the shot is taken) they might be able to put a few more past Fleury and knock down his confidence a bit.

3. No passengers allowed ~ The Minnesota Wild need every player to be giving it their very best and show the willingness to do whatever it takes to score or to prevent a scoring chance even if it means putting taking a hit or blocking a shot.  A few of the Wild’s players from Tuesday night seemed a bit timid in some in the corners and in some of the more physical battles.  Good teams will exploit that in the playoffs.  Everyone has to be ‘all in’ or they will find themselves all out (of the playoffs).