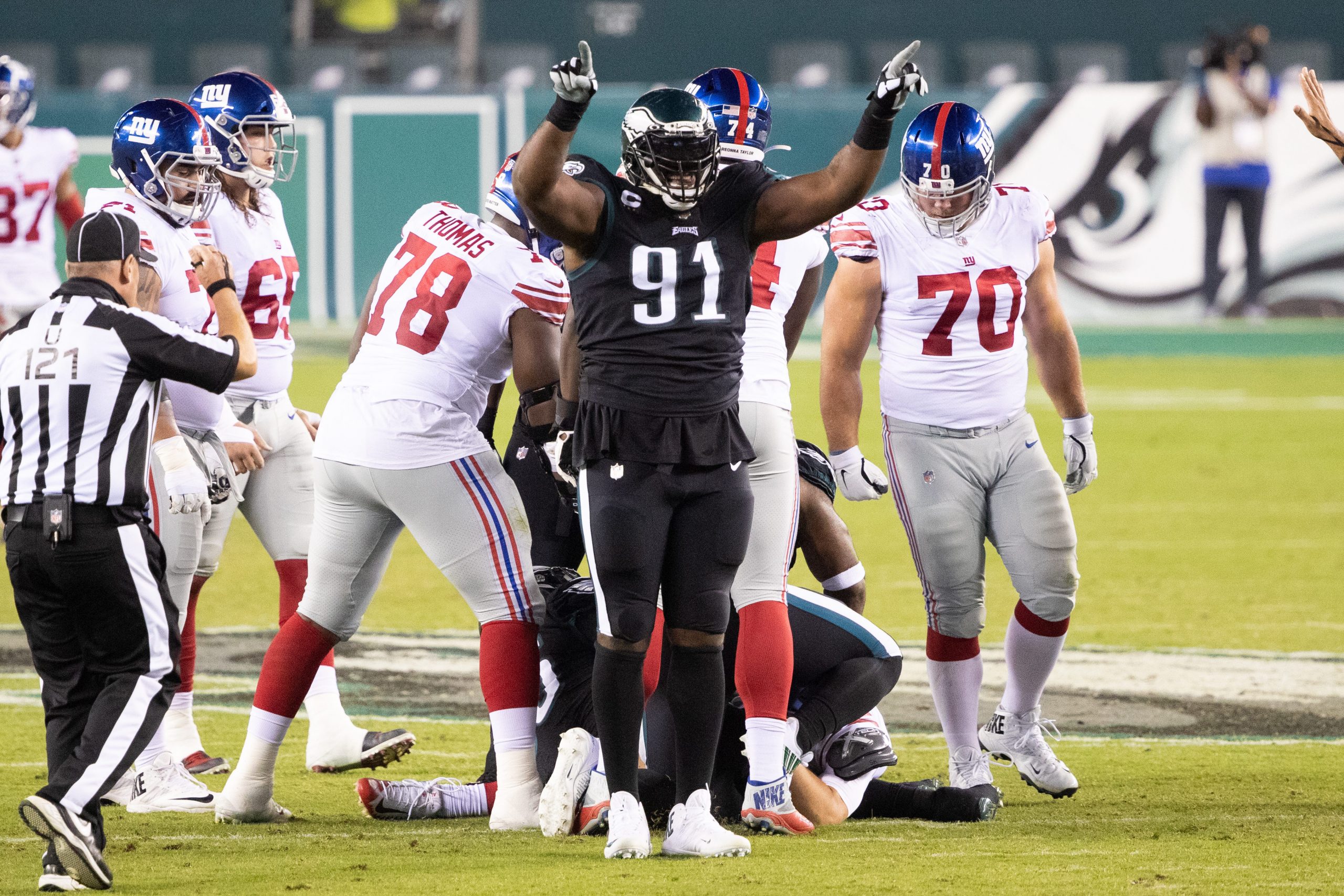 It was a nervous first half for the Birds and their fans. Hey, this was supposed to be a blowout, right? Yet there was Jalen Hurts struggling a bit to get any kind of rhythm going with his own offense. The Eagles’ defense deserves credit for keeping the first half in check, but the Giants’ trotting out some truly struggling quarterbacks in Jake Fromm and Mike Glennon helped matters.

“Another week where we came out and didn’t execute like we wanted to, but I’ve always admired the grit and perseverance of this team,” Hurts said. “We have so much character in how we do things, how we operate, how we’re able to overcome.”

Hurts is implicitly giving credit to the Eagles defensive unit which gave him and his coaches a time margin of error to find a solution to their offensive frustrations. Hurts shook off a dismal first half and threw for 199 yards and two touchdowns to push the Eagles over .500 for the first time since they won the season opener.

The Eagles scored 31 points in the second half, none quite as cool as the 5-yard pass from Hurts to RT Lane Johnson early in the fourth that made it 27-3. Johnson, the standout right tackle, reported as eligible and was left all alone when Hurts hit him for the easy score. Johnson, who had missed three games this season to address depression and anxiety, became the first Eagles lineman to score a TD since 2010.

Hurts threw the 5-yard touchdown to Johnson, linebacker Alex Singleton returned an interception for a score and the Philadelphia Eagles continued their late-season playoff push with a 34-10 win over the New York Giants on Sunday.

The Eagles (8-7) have won six of eight after opening the season losing five of seven and moved into the seventh playoff spot in the NFC. They could clinch a playoff berth with a win and some help next week.

Mike Glennon, playing after Jake Fromm was benched in his first NFL start, had a pass picked off by Singleton and returned 29 yards for the score. The rout was on in Philly.

Fromm’s first pass of the second half was intercepted by safety Rodney McLeod and Boston Scott punched in a 3-yard touchdown for a 10-3 lead. Hurts also hit DeVonta Smith for a 4-yard touchdown in the second half in an odd sequence that saw replay overturn the call, only for another call for replay that restored the score.

Fromm got the start with the Giants (4-11) left with little options after Daniel Jones was shut down for the season because of a sprained neck. Fromm went 6 of 17 for 25 yards and one interception before he was pulled for Glennon late in the third. Fromm’s passer rating was just 19.5.

The first half was played by both teams with the urgency of a meaningless preseason finale. Easy drops. Fumbles. A missed field goal. Hurts and Fromm combined for a 5 for 17 first quarter — each with an identical 39.6 QB rating.

Maybe the short rest affected Hurts and the Eagles early. The Eagles beat Washington just five days earlier on Tuesday because of a postponement necessitated by COVID-19 issues. Hurts is still recovering from a sprained left ankle, and the QB who had already rushed for more than 700 yards this season ran for only 1 yard in the half.

Fromm only threw for 18 yards in the half. Glennon tossed a touchdown late in the game.

“I wish I would have gone out and handled my business and led us to victory,” Fromm said.

The usually steady Jake Elliott snapped a streak of 17 straight field goals when he missed a 41-yarder. Graham Gano kicked a 54-yarder — only 22 yards shy of New York’s total first-half offensive output — and Elliott kicked a 22-yarder to send the game into halftime tied 3-all.