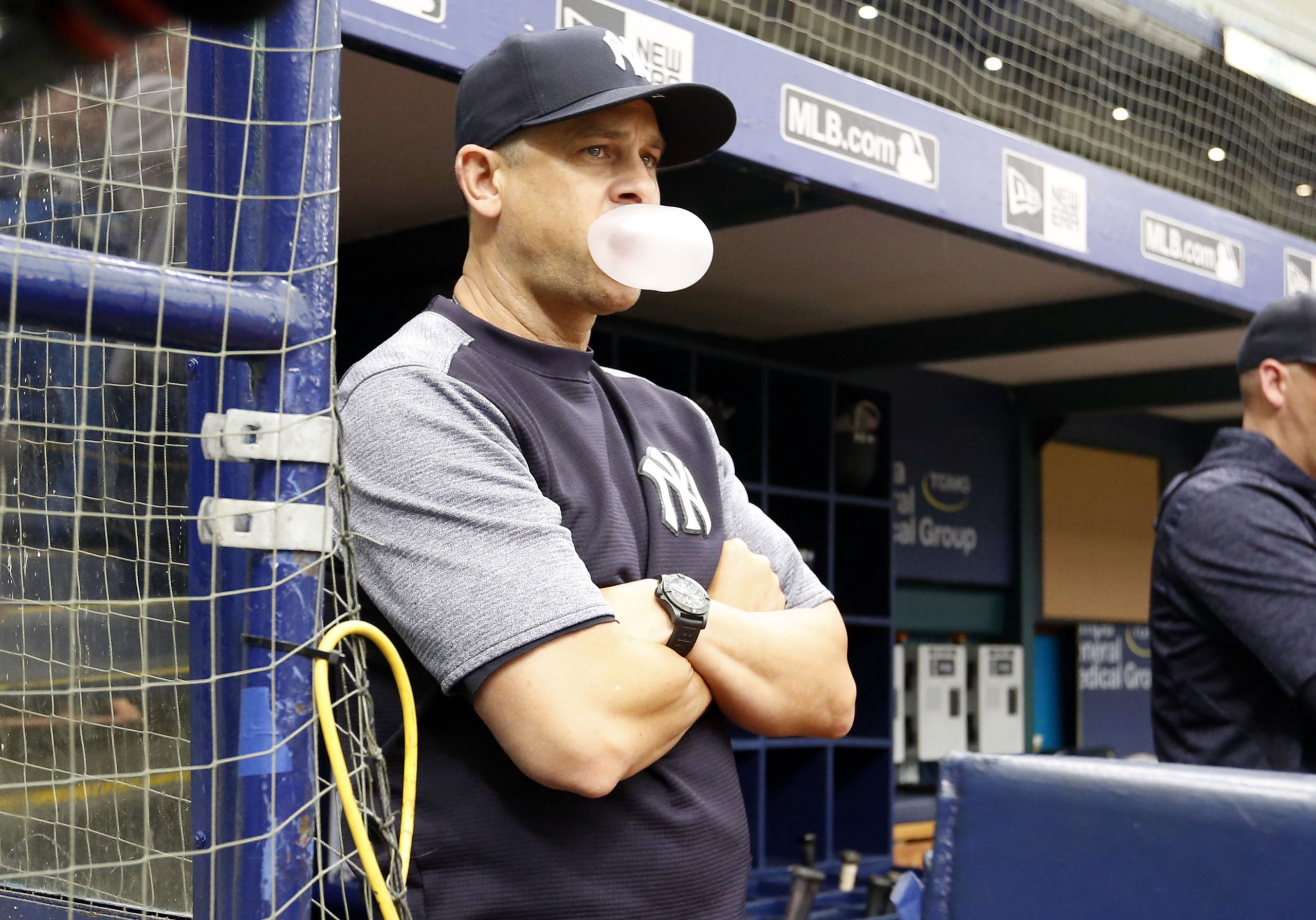 I have a confession to make. I didn’t want the New York Yankees to win a Wild Card spot this year. Terrible, I know. But I know this is a flawed team that is never going to win it all as currently constituted. And the ONLY way team owner Hal Steinbrenner might have been pushed to make a change in the Yankee front office is if the team had missed the playoffs entirely, with a humiliating season that left no doubt that big changes needed to be made.

Instead, we got the worst of all worlds. The Yankees’ season, which was filled with sloppy play and a breathtaking lack of accountability and wasn’t even fun to watch (I was at the Subway Series game where both Gerrit Cole and Aroldis Chapman got booed off the mound, and it was miserable!) lasted all of three hours more than the Mets did. The Bronx “Bombers,” despite finally having a true ace again in Cole, got their butts kicked by the Boston Red Sox, who look well on their way to their fifth (!) World Series title since 2004.

Yet because Prince Hal knows nothing about baseball, and is terrified somebody might think he’s turning into his father if he ever fires anyone, he actually thinks bringing back Aaron Boone is a good idea. (This also means that the underachieving, overrated, bike-riding-without-a-helmet, self-aggrandizing Brian Cashman will continue to be the Yankee GM for Life, of course.)

And we fans are told, yet again, that the postseason is a “crapshoot.” So then why celebrate the 27 rings at all? Doesn’t that mean that the Yanks were just lucky, not excellent, in those years?

One more aside: Yankee haters always point out when hearing the “count the rings” stuff that many fans weren’t even alive for most of those rings. That’s true. But then you can’t call us spoiled if we want to know why this team has one ring since Bill Clinton was president!

How stupid is this whole line of reasoning, anyway? You can’t say you just ran into a buzzsaw in the playoffs when you have won only one division title in nine years and one title since 2000. Did the Red Sox just get really lucky four times since 2004? C’mon now!

Look, I don’t think Boone is the sole or even the top source of this team’s problems. But he is a symbol. Of a lack of energy and urgency on this team.  Of sloppy fundamentals. He’s not even a fan favorite the way Joe Torre was.

Boone was hired with zero managerial experience on the basis of apparently the best MLB managerial interview since Art Howe “lit up the room” when going for the Mets job. And because Boone had the “right” pedigree (coming from an MLB family cannot be taken too lightly, given that both Hal and Cashman got their positions based on family connections) he got the job. That and a big homer 18 years ago.

Neil Keefe of the Keefe to the City blog makes a compelling case that Boone’s homer to beat Boston in the 2003 ALCS was ultimately one of the worst things to happen to the Yankees. As he notes, the Sox traded for Yankee-killer Curt Schilling after that season. Maybe they wouldn’t have if they had won it all in 2003.

Now Boone is apparently what I always feared Don Mattingly would be as a Yankee manager — completely untouchable and unfireable.

Hal Steinbrenner has channeled his father in only one thing — sending out press releases written by flacks pretending to be him, instead of answering questions from the press. (Is ANYBODY in the media going to ask why Hal has given exactly one interview in the past year and still hasn’t said anything in public about the end of this season?) But at least George was having Howard Rubenstein write his press statements when The Boss was in his 70s and was no longer mentally all there. Hal is 51 and has all of his marbles. What’s his excuse? 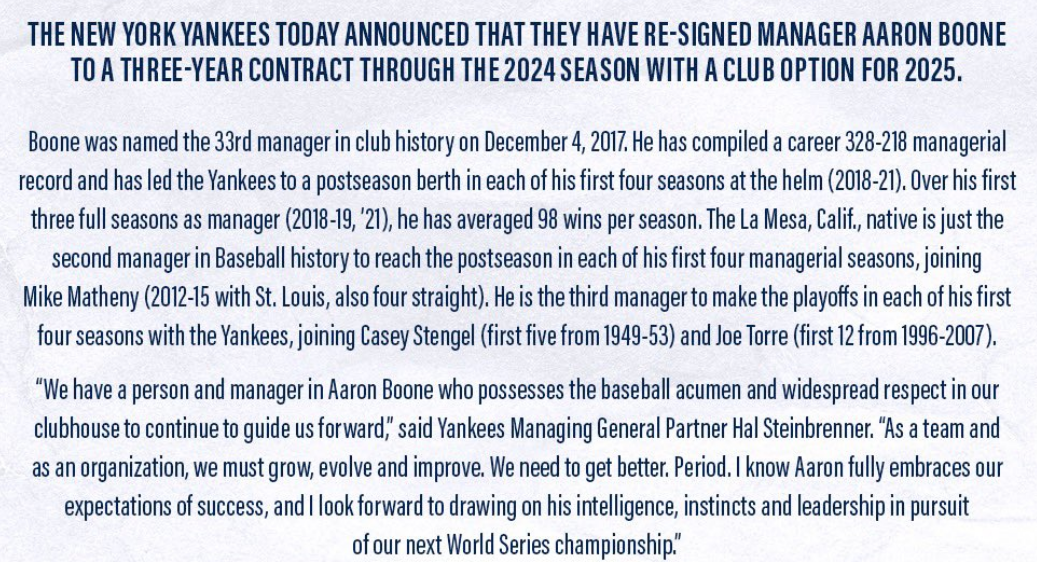 “We have a person and manager in Aaron Boone who possesses the baseball acumen and widespread respect in our clubhouse to continue to guide us forward.”

Baseball acumen? Show your work, Hal! Give us an example! For the last four years, I have been wondering, what is it that Aaron Boone has done as manager that nobody else could do? The “savages in the box” thing was fun and made a cute t-shirt slogan, but that was about it. He’s no Alex Cora, that’s for sure.

As for “widespread respect in our clubhouse,” there is a time and a place for a player’s manager. But they need to get results, the way Bob Lemon did in 1978 and Joe Torre did in his early Yankee years.

The players may like Boone. (Didn’t *you* like the teacher who showed movies in class and let you do whatever you wanted to?) But where is the evidence they respect him, exactly?

As Bill Parcells used to say, you are what your record says you are. And this team is a $207M, third-place team that couldn’t even win a wild card game despite being projected to be World Series contenders. Some respect!

“As a team and as an organization, we must grow, evolve and improve. We need to get better. Period.”

Yet Hal is bringing back the same manager. The same general manager. The same nameless, faceless, unaccountable analytics people who thought that this lineup didn’t need a lefty slugger, that Aaron Hicks would stay healthy, and that Gleyber Torres was great at shortstop. Well, Cashman did get rid of a few coaches. Whoopee.

And Boone isn’t getting a one-year, win-or-else contract to match with Cashman’s contract expiring next year. They are giving him *three* more years (!) with an option for a fourth season! Talk about mixed messages!

“I know Aaron fully embraces our expectations of success, and I look forward to drawing on his intelligence, instincts and leadership in pursuit of our next World Series championship.”

Is there anybody out there who thinks of Aaron Boone and ponders his “intelligence, instincts and leadership”? I think of nepotism, white privilege, and puppetry. But that’s just me, I guess.

I’m sure Boone is a nice guy, but that doesn’t make him a good manager.

This statement also emphasizes Boone’s regular season victories and compares him to Casey Stengel, Joe Torre (except Casey had four rings in his first four years as Yankee manager and Joe had three, while Boone has none) and former St. Louis Cardinals manager Mike Matheny. But that latter comparison is a very strange one that somebody in the media should have called out when talking to Cashman and Boone in yesterday’s presser.

Matheny, a St. Louis fan favorite as a catcher, notoriously got the Cardinals job when his only coaching experience was in Little League (but it was still literally more coaching experience than Boone ever had!) And unlike the Yankees, the Cards had won the World Series in 2011, the year before Matheny took over for Tony LaRussa. Also, Matheny did get the Cardinals to the World Series in his second season. And the Cardinals did win their division each of those years, unlike Boone.

But here’s the kicker on why it is a dumb comparison. The Cardinals gave Matheny a contract extension in 2016, after his sixth season, to go all the way to 2020. So how did that work out for St. Louis? (Chart courtesy of Wikipedia): 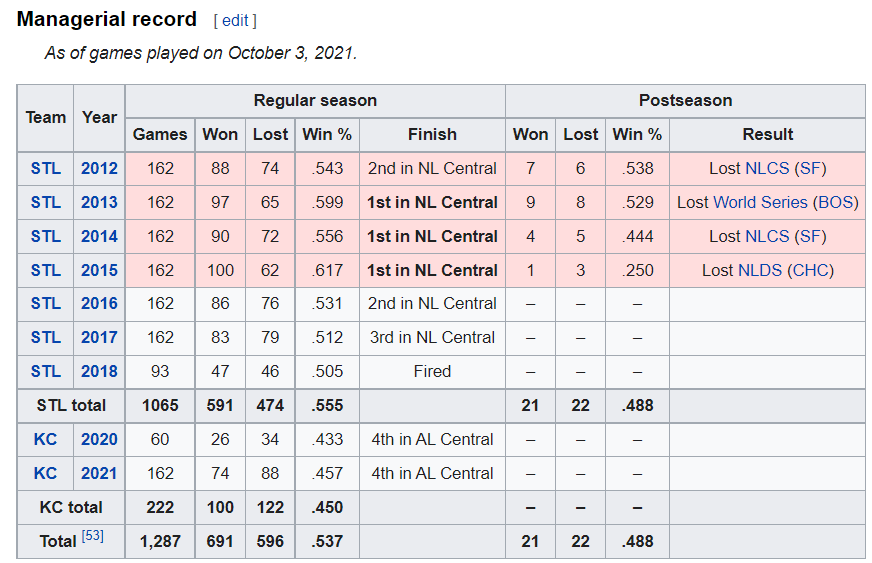 Ironically, the Cardinals announced this extension the day after their rival Chicago Cubs won the World Series. Sports Illustrated described it this way (emphasis added):

The Cardinals had just missed the postseason for the first time in six years and the division’s landscape was shifting under their feet. In 2015, Chicago had kicked St. Louis out of the playoffs to make it through the postseason’s first round for the first time in more than a decade; now, a year later, they were celebrating a championship while their long-time rivals were sitting at home. The Cardinals, however, didn’t read this situation as a catalyst for change. Rather, they intended to stay the course, and they announced as much by extending their manager.

After the big contract extension, Matheny’s Cardinals missed the playoffs the following year. Finally, in 2018, the Cardinals front office had seen enough and he was fired in the middle of the season, even though there were still 2 1/2 seasons remaining on his contract.

So let’s review: Boone gets compared to a manager who went downhill after his first four years and his team never sniffed the playoffs again under his leadership. *That’s* their recent comparison of great management? Good grief. Couldn’t they at least come up with an example of a manager who got their team over the hump after four disappointing seasons? (Oh, wait — most teams would have gotten rid of their manager after that, not kept him on! Even the Mets have higher standards than this!)

Anyhow, the only way things change in Yankeeland is when the team suffers a financial hit from fans not going to games, watching them on TV, and buying merchandise. Already the team is eighth in attendance in the majors this year, down from third in 2019 and second in 2018. Both Los Angeles and San Diego outdrew the Yanks despite California keeping COVID-19 attendance restrictions a month longer than New York did.

Until then, the franchise is perfectly happy to keep their little country club going, where there’s no accountability and no consequences, and while they market ancient-history titles. Enough! 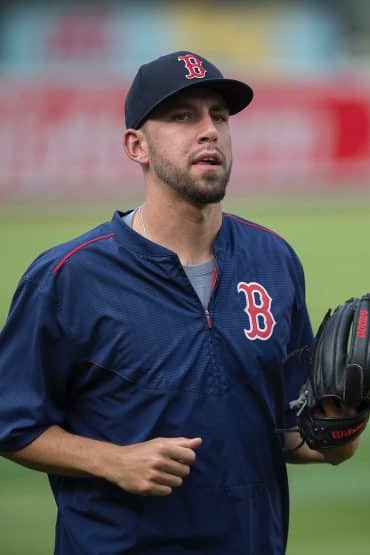