Lundqvist’s Reign on Broadway Comes to an End 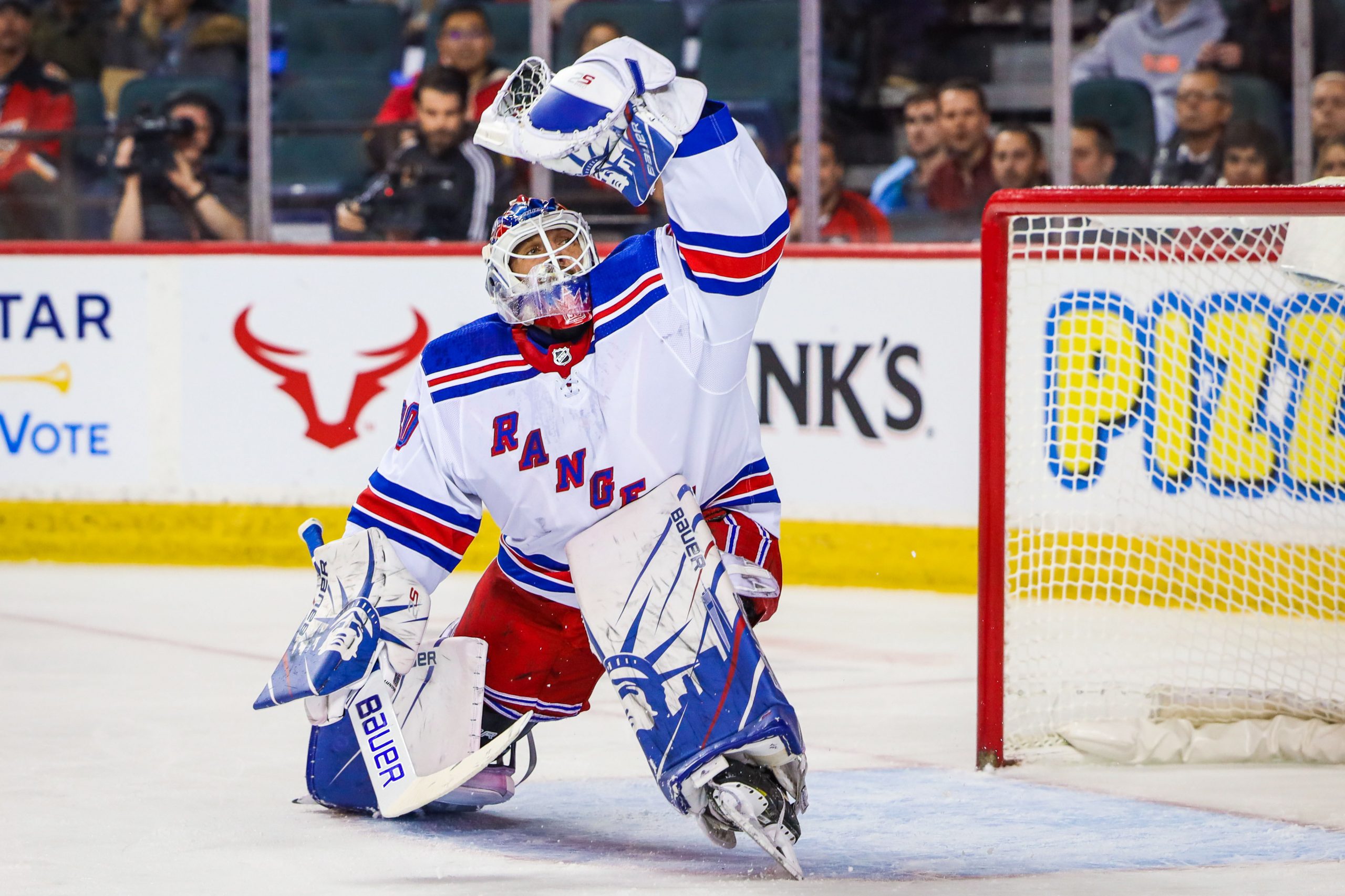 Henrik Lundqvist‘s time in the New York Rangers’ crease has come to an unceremonious end, as the team bought out the man who has been the face of the franchise for fifteen seasons.

Once upon a time, such an ending seemed unfathomable for arguably the greatest goaltender to don the sweater, who seemed like he’d spend his entire career with only them. But his age, the salary cap, his cap hit, and two younger (and cheaper) goaltenders who outplayed him forced the team’s hand.

It’s hard to believe that in 2005, coming out of the canceled season, that Lundqvist was a virtual unknown to Rangers fans, a “let’s take a chance” type 7th round pick in the 2000 Entry Draft. But the rookie earned his spot on the roster as the backup to Kevin Weekes. An injury to Weekes gave him the opportunity to supplant the veteran, and he never looked back.

Goaltenders seem to have a special place among the Garden Faithful –  from Ed Giacomin being cheered in his return with the Detroit Red Wings after being unceremoniously waived by the Rangers in 1975, to current Team President John Davidson, who took the team to the Stanley Cup Final in 1979 and  1994 Cup winner Mike Richter –  and it didn’t take long for the Swede to win them over, with thunderous chants of ‘Hen-rik! Hen-rik!” echoing through the arena. New York Post writer Larry Brooks dubbed him “The King,” and the nickname stuck. More importantly that season, he backstopped a team that pundits expected to finish dead last to the final Eastern Conference playoff spot. The Rangers were swept at the hands of the rival New Jersey Devils, but it wound up being the first of many playoff appearances in the salary cap era.

Lundqvist was the backbone of a team that, for many seasons, played greater than the sum of its parts. And while trades brought in very good players like Jaromir Jagr (32 at the time he was acquired), Marian Gaborik, and Rick Nash, they never had a Sidney Crosby– or Alex Ovechkin-type superstar skater to carry the load, making Lundqvist critical to their success. Between the ’05-’06 and ’16-’17 seasons, the Blueshirts only missed the postseason once, when Olli Jokinen failed to score in a shootout on the final day of the regular season against the Philadelphia Flyers. They would get to three Eastern Conference Finals and one Stanley Cup Final, where they lost to the Los Angeles Kings in five games. Likely no Rangers fan, six years on, has been able to get that image of Lundqvist sprawled out on the ice after Alec Martinez scored the clincher. 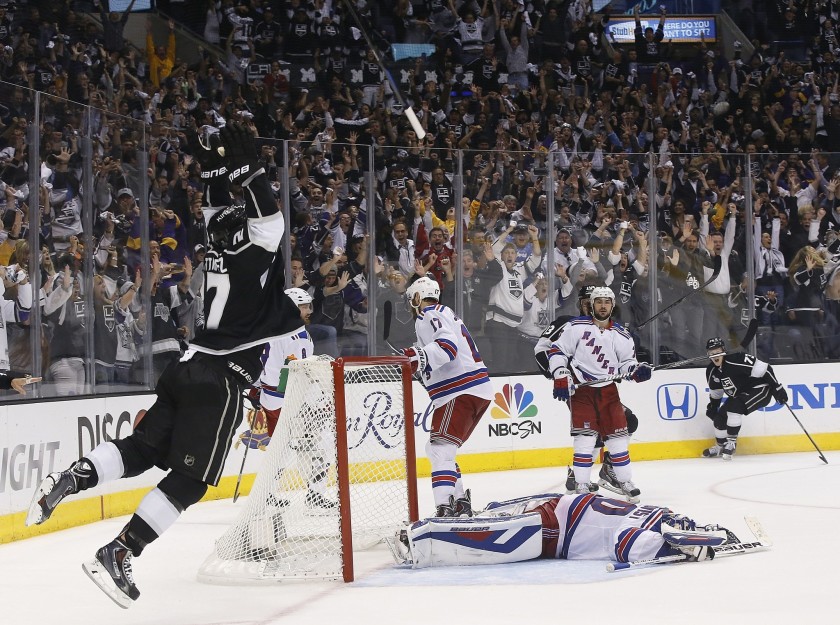 As has been seen with many teams in the salary cap era who have contended for years, some with success others without, time and salary cap constraints caught up with the Rangers, and it was clear the contention window had essentially closed. Jeff Gorton and Glen Sather sent out the infamous letter to season ticket holders in February 2018, being open and honest that a rebuild was to commence. Lundqvist, the holder of a no-move clause in his 7-year, $59,500,000.00 contract, was given the option to go to another team and chase that elusive title; he chose to stay and stick it out with the rebuild.

Time and technology has allowed fans to be even more attuned to their prospects than ever before, so Igor Shesterkin did not sneak up on Rangers fans in the same way that Lundqvist did. The expectation was that the Russian, who put up some eye-popping numbers in the KHL would be the heir to The King’s throne, with perhaps the two as a tandem for a season or two. Alexandar Georgiev, who had been Lundqvist’s backup during the 2018-19 season, made his own strong case for more starts (and received them) even before Shesterkin was recalled.

Shesterkin made his NHL debut on January 7th. While the “transition of power” was inevitable, it was somewhat surreal to watch in real-time, as the rookie received chants of “I-gor! I-gor!” the same way the veteran netminder had since 2005. The three-headed goalie monster had arrived, and someone was going to wind up the odd man out this offseason. Lundqvist’s final start in a Rangers uniform was a 4-1 loss to the Carolina Hurricanes in game 2 of the Stanley Cup Qualifiers.

Lundqvist’s accomplishments since 2005 are impressive – an Olympic gold medal in 2006; named to the All-Rookie Team in 2006; five Vezina Trophy nominations; winning in 2012; nominations for the Hart Trophy and the Ted Lindsay Award that same season in 2012; two King Clancy nominations for his charitable and humanitarian efforts (2019 and 2020); selected to the All-Star Game five times. He was the selected the Rangers’ MVP nine times and won the Steven McDonald Extra Effort Award, voted on by the fans, twice.

He did everything as a Blueshirt but win the Stanley Cup.

With so many goaltenders seemingly available this upcoming offseason either through the trade market or free agency, there is no guarantee that he will find a new home, even at a reduced salary, to continue to chase that one piece of hardware that has eluded him in his illustrious career. He’s not the same goaltender that he was in his prime, but with his work ethic (something that Georgiev says has rubbed off on him) and competitive nature, he still has something to offer a team both on and off the ice even in a backup role. Whether or not he finally does win a Stanley Cup, he has all but guaranteed his ticket to the Hockey Hall of Fame and that his number 30 will wind up in its rightful place in the Garden rafters, nestled between Jean Ratelle‘s 19 and Richter’s 35.