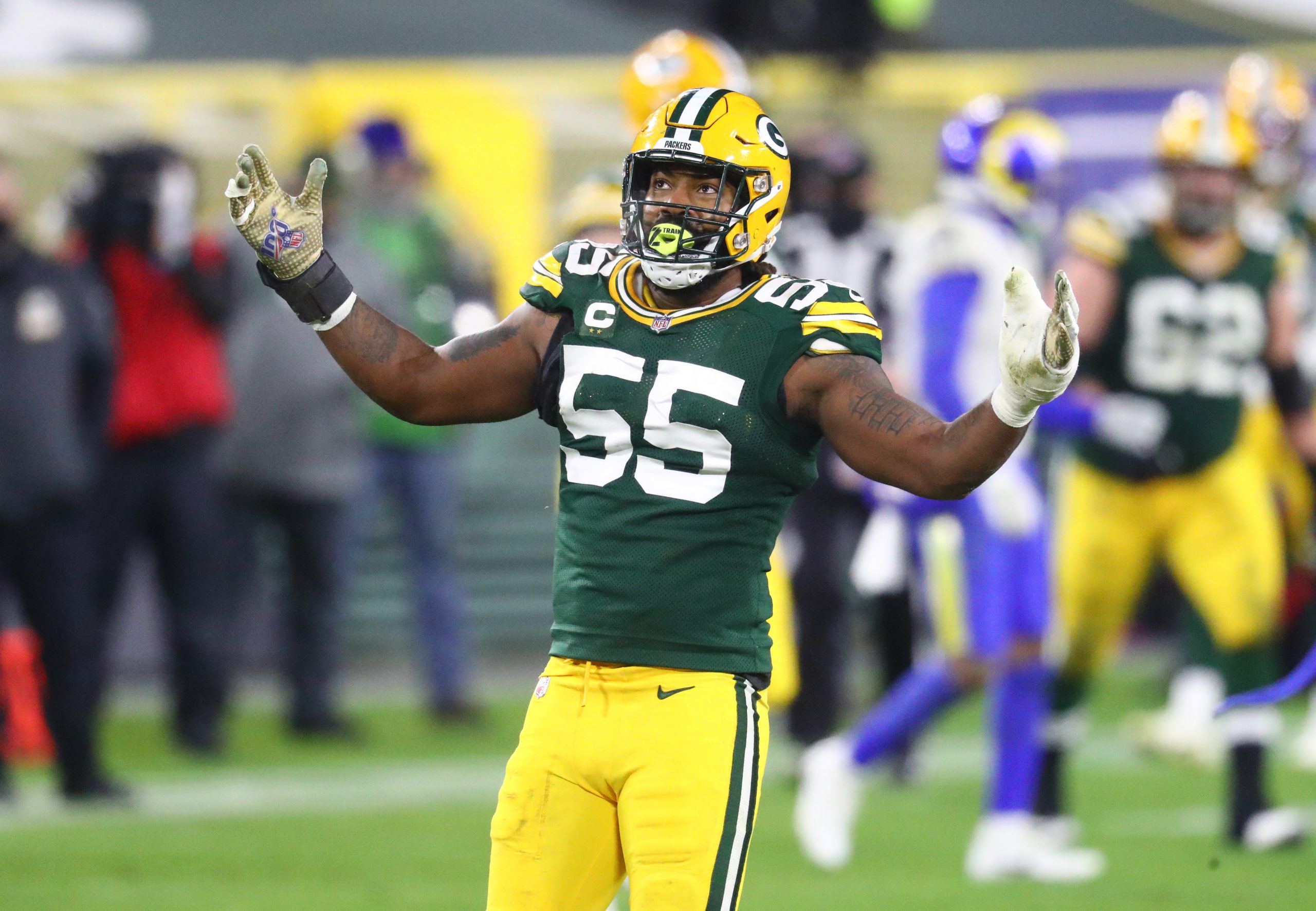 Still, there were times when the defense struggled to get key stops and they had breakdowns at key times. The bend but don’t break strategy worked most of the time, but not always and too often soft zone coverages allowed opponents to get back into games in which the Packers had a lead.

Two players on defense were named to the Pro Bowl, outside linebacker Za’Darius Smith and cornerback Jaire Alexander.

At the end of the season, the Packers decided not to bring back defensive coordinator Mike Pettine. That means chances are likely coming to the defense in 2021.

Here are the grades for the Packers defense in 2020. The marks are based on a combination of expectations and performance. Grades are listed for each position group with each player’s comments and analysis discussed within the group paragraph.

Kenny Clark remains the team’s best defensive lineman. He was injured in Week 1 against Minnesota and took a while to get back to his previous level of play after his return. By December, Clark was back to his top form, getting penetration on running plays and providing pressure on opposing quarterbacks from the interior of the defensive line. Clark finished the season with 42 total tackles and two sacks while also being credited with six quarterback hits.

Kingsley Keke showed flashes of ability to rush the passer but he tended to be streaky in this area. The second-year man out of Texas A&M finished the year with four sacks, eight quarterback hits and 21 total tackles. If he can get more consistency, he can become a solid contributor along the d-line.

Dean Lowry quietly recorded three sacks and was in on 36 total tackles. Lowry is a hard worker who is better at stopping the run than rushing the passer.

Tyler Lancaster didn’t record a sack and was in on 23 tackles. The former Northwestern star plays almost exclusively on run downs and is more effective against the run than at pressuring the quarterback.

The Packers other linemen played limited roles. Montravius Adams only played eight games before being placed on the injured reserve. His contract is up and he may not be back because the former third-round pick never quite reached his potential on a consistent basis. Billy Winn made six tackles in six games. He also knocked down two passes in a limited role. Snacks Harrison signed late in the season and played on run downs in the season finale and playoffs. He didn’t have much of an impact.

Za’Darius Smith returned to the Pro Bowl after leading the team with 12.5 sacks. He remains the team’s best pass rusher but was a bit less consistent than he was in 2019 when his pressure statistics were elite. Smith is a leader on the defense and a huge part of what the Packers do. He’s fast, smart and a leader in the locker room.

Preston Smith’s play fell off dramatically compared to last season. He finished the season with four sacks after recording 12 in 2019. He had 11 quarterback hits this year, less than half the 23 he recorded the previous season. Preston’s play improved in the final six weeks of the season but he needs to bounce back and return to something closer to his 2019 form.

Rashan Gary took a big step forward in his second year. He recorded five sacks but also had 19 quarterback pressures and eight hurries. His ability to create pressure often helped teammates to record sacks or forced incomplete passes. If he can continue his improvement next season, he should play an even bigger role in the defense.

Rookie Jonathan Garvin made eight tackles. He played 85 snaps on defense but mostly contributed on special teams. He didn’t record any sacks or quarterback pressures this season but hopes to make a second year jump in 2021. Randy Ramsey made 11 tackles in 12 games after returning from injury. He recorded one quarterback pressure but didn’t have any sacks. He was a bigger contributor on special teams.

Christian Kirksey failed to live up to expectations early, making a lot of tackles but few impactful plays. He was injured in Week 3 and struggled when he returned. Late in the season, Kirksey stepped up his game. He finished with two sacks and two interceptions while making 77 tackles. The Packers have a tough decision to make regarding whether to bring Kirksey back.

Krys Barnes started the season on the practice squad but was called up for Week 1 and never looked back. The undrafted free agent out of UCLA showed promise and eventually took over calling the defensive plays for Kirksey. The Packers hope he can make a second-year jump and fortify this questionable position.

Kamal Martin was the best ILB in training camp but was injured at the start of the season and it set him back a bit. He didn’t play until week seven against Houston but once he got into the lineup, he demonstrated why the coaching staff was so high on him. Martin was inconsistent and made his share of rookie mistakes, but he is a physical player who showed the ability to contain the run and occasionally blitz the quarterback. He recorded 24 total tackles and one sack in limited action but did show some promise.

Ty Summers filled in when injuries hit the ILBs. He made 39 tackles on the season. On defense, he was a replacement value player but he exceled on special teams. Oren Burks made 21 tackles but played only 96 snaps on defense all season. He was a big part of the team’s special teams coverage units but he has yet to show he can contribute meaningfully to the defense.

Jaire Alexander became one of the league’s premier cover corners and earned Pro Bowl honors for the first time in his career. Opposing quarterbacks completed only 51.3 percent of their passes against Ja’Money and had a quarterback rating of just 67.4. He shut down some of the league’s better receivers and his confidence was contagious.

Kevin King had an inconsistent year which saw him battle injuries. He missed five games and failed to intercept a pass after picking off five a year ago. The Packers were better off when he was in the lineup, but he gave up too many big plays when he struggled and they often came at the worst time. He is an unrestricted free agent this offseason and may not be back.

Chandon Sullivan took over as slot corner and had an up and down year. He was outstanding as the dime back in 2019 but only average in the slot. Sullivan has the talent and work ethic to grow into the role and next year will be pivotal in his development.

Josh Jackson played in 12 games, starting five but he was also very inconsistent. He made 26 total tackles but opposing quarterbacks completed 74.2 percent of their passes when throwing to receivers covered by Jackson. By the end of the season, he was often inactive and his future with the team is up in the air.

Ka’dar Hollman played mostly on special teams, making 10 total tackles on the season. The former Toledo star likes to play a more physical style of pass defense and may get the chance to more in 2021. Tramon Williams was signed in the playoffs to add depth. He’ll turn 38 in March and may retire. He has done a lot for the Packers during his three tours of duty with the club but it’s doubtful he’ll be back.

Adrian Amos remains a consistent and smooth safety who sees the entire field and makes smart decisions. He is almost never out of position. Amos finished the season strong after a shaky first six weeks. He came up with two interceptions and made two sacks. By the end of the season, he was playing at a Pro Bowl level.

Darnell Savage made a jump in his second season. Like Amos, he struggled early but by the end of the season, he was making his share of big plays and being more of a disruptive force. The Maryland alum has the potential to become a top quality safety if he continues to grow and plays in the right system.

Raven Greene struggled to stay healthy again this season. He played in 10 games and recorded 44 total tackles including 1.5 sacks and one interception. He was a favorite of Mike Pettine and his future in Green Bay may depend on who replaces Pettine as defensive coordinator.

Will Redmond filled in at safety when Greene was hurt. He is a serviceable safety but strong on special teams. He made 28 total tackles on the season in 13 games. Opposing quarterbacks had a rating of 114.6 when throwing to receivers covered by Redmond.

Henry Black and Vernon Scott both got their feet wet as rookies and both showed flashes of potential. They contributed mostly on special teams and will look to assume larger roles on the defense next year.