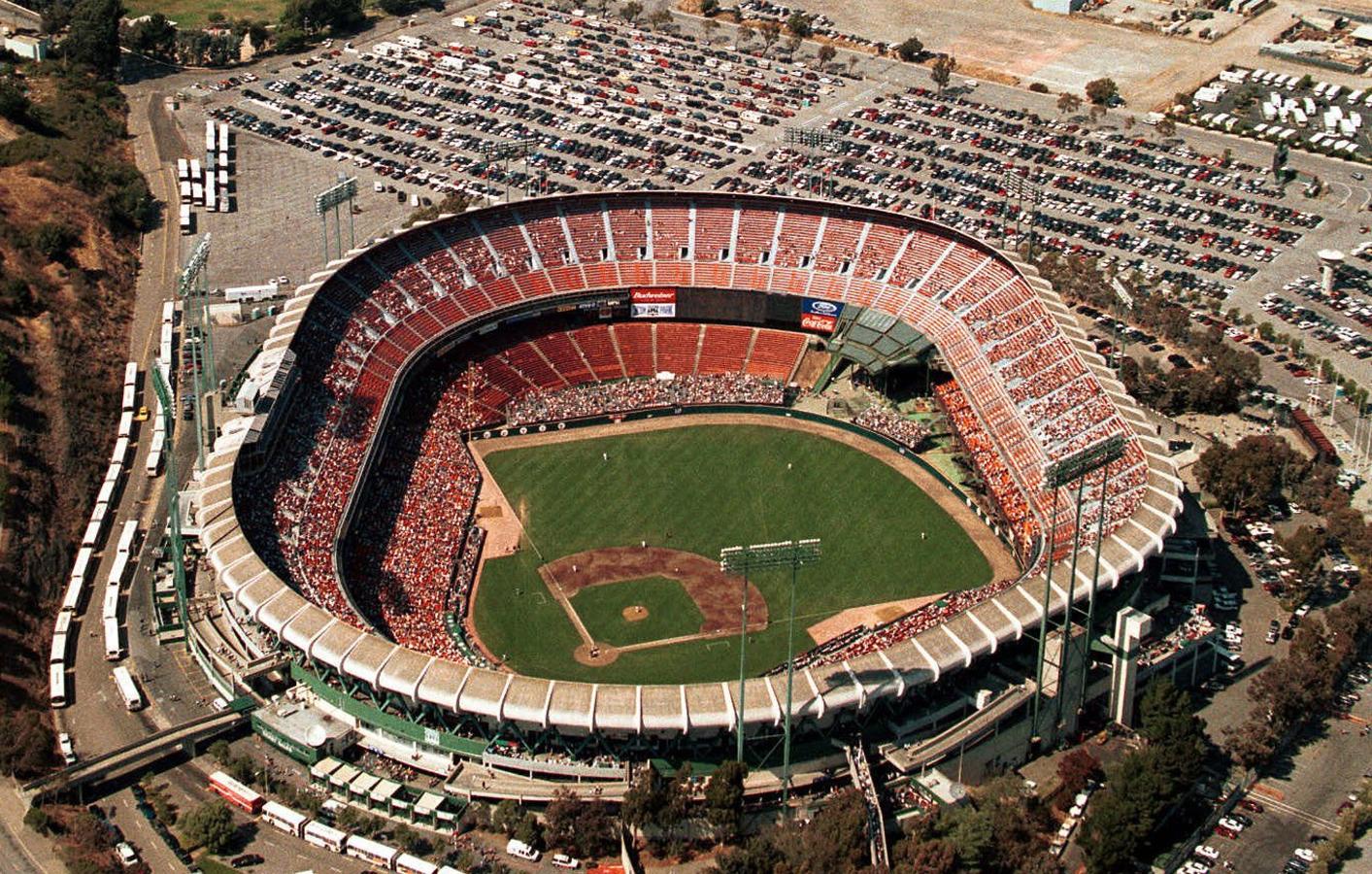 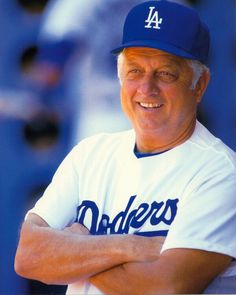 If you were fortunate, you got the chance to play a live role in the hyperactive theatrical world of Tommy Lasorda: the supporting cast included ballplayers and umpires, other managers and coaches, celebrities, and baseball fans—specifically San Francisco Giants fans.

Here it’s important to fully understand the stage upon which Giant fans gathered to worship their beloved Gigantes, and where they played an award-winning supporting role in the Broadway-worthy circus that was Thomas Charles Lasorda.

That place would be the soul-deadening hellscape known as Candlestick Park, where the San Francisco Giants of the National League played our national pastime for thirty-nine years.

Candlestick was a place so cold and wind-blown, it made the religious question the existence of a merciful god, caused kindly grandmothers to snap at children while gulping flagons of cheap chilled beer, and forced longtime fans of the summer game to stare in disbelief as their fingers and toes slowly numbed in the permafrost. 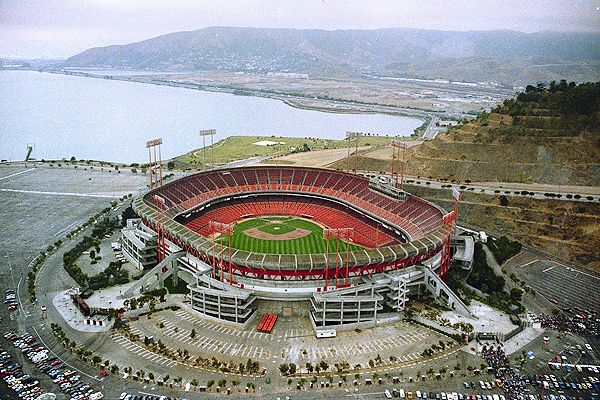 The broken cereal bowl-shaped stadium became known as “the Stick”, not so much as a clever nickname but more as a description of having that frosty instrument of torment eventually find its way deep into that other place where the sun never shines.

The April 12, 1960 to September 30, 1999 arch of the life of Candlestick Park coincided nicely with Tommy Lasorda’s Dodger managing career, 1976-1996. And I think it was sometime in the very early 1980s that Lasorda found a new level of animated super-theater whenever the Dodgers played their away games at the Stick.

Someone with a more exacting timetable and precise notes from that long-ago time may correct me here, but the Tommy Lasorda Candlestick pre-show began in the early 1980s after Lasorda noted that when on the road in San Francisco, Giant fans began booing him when they first saw him on the field before games.

A note here about the nonsensical blueprints of the old Stick, which were the opposite of helpful for players and fans attempting to endure the unrelenting wind of day games and the unrelenting arctic weather of night games.

The Giants’ dugout was along the first base side of the field, complete with a tunnel that led back under the stadium proper to their clubhouse, manager’s office and workout rooms. Heat from the clubhouse made the home dugout tolerable, except at night or during the daytime.

The visiting dugout was along the third base line and was just that—an isolated dugout. No tunnel or back door led to the visitor’s clubhouse, the back of the dugout being a solid concrete wall. Without any shelter or heat, the visitor’s dugout was a pleasing combination of windswept in the daytime and freezing at night.

In an astounding architectural touch, initially there wasn’t even a toilet in the visitor’s dugout. One would eventually be grudgingly added, leaving the curious to imagine what contingencies were used in the seasons prior to that. 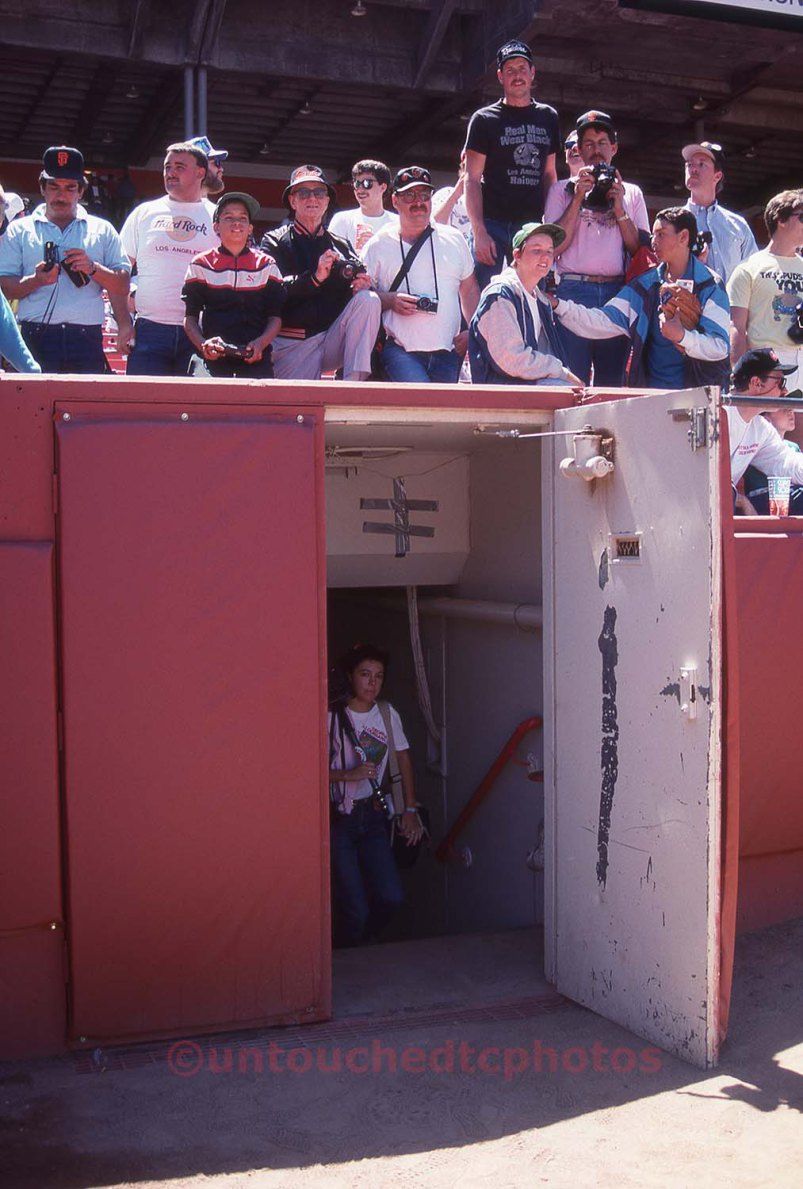 So the visiting team at Candlestick Park would enter the field from a narrow tunnel that led from the visitor’s clubhouse to a doorway way down the rightfield line almost to the fence. Players and coaches walked from right field across or around the diamond to reach the visitor’s dugout.

There came a time when Tommy Lasorda decided to make an entrance before the start of each game at the Stick, emerging from the visitor’s tunnel, smiling and waving amidst a growing chorus of boos, jeers, rude gestures and just plain yelling from Giants fans. Tommy did not rush to the Dodgers’ dugout– he slowly walked while blowing kisses, waving, repeatedly tipping his cap to the fans; the swell of disapproval reached its zenith when Lasorda reached the top step of the visiting dugout.

One more slow, grand tip of the cap, and he disappeared into the dugout. Slowly, the fans’ vociferous disdain faded, the umpires emerged on the field, starting line-ups were exchanged, and a baseball game would commence.

This theater went on for many baseball seasons. Not only did the Lasorda spectacle not get old, it became yet one more procedural thing that had to happen before the first pitch could be thrown. Stadium staff had to lay down the white baselines and water the infield; Giants players had to trot out to the field and throw baseballs around the horn and around the outfield as the stadium PA announcer welcomed the fans.

Everyone had a job to do. For Giants fans, their assignment was to unmercifully boo and razz Manager Tommy Lasorda when he walked to the visiting dugout. After all that business was taken care of, someone sang the National Anthem and the first pitch was thrown. 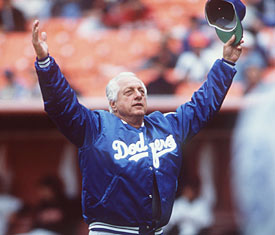 Flash forward to the early 1990s. Something amazing, but organic, occurred during the traditional pregame Lasorda walk and boo.

At some point Giant fans began to experience the moment in a new way, understanding the importance of those interactions in a more global prism. Now, as Tommy Lasorda reached the pitcher’s mound on his snail-like epic journey across the infield, the boos and jeers morphed into clapping, even cheering. It became important for Giant fans to let Lasorda know they completely understood that none of this would happen without his theatrical participation, and that he coauthored these unscripted moments with them.

So the new paradigm was set. Unrelenting boos and utter disdain followed Lasorda from the tunnel to the mound, transitioning almost imperceptibly to respectful applause and joy-of-the-moment laughing.

Tommy Lasorda’s last season as LA’s manager was 1996. During his tenure he had won two World Series Championships and the team honored the sacred keeper of Dodger blue with the title of Vice President.

By 1999 the San Francisco Giants’ new downtown stadium, Pacific Bell Park, was poised to open. As the Giants played out their final season at Candlestick Park that year, they fittingly scheduled the Los Angeles Dodgers to play the final three games at the Stick.

Thursday September 30, 1999 was the final home game. Well prior to the 1 p.m. start, 47,343 Giants fans were treated to something they hadn’t seen in three years: there was Tommy Lasorda emerging from the visitor’s tunnel for one more historic stroll across the diamond.

A microphone had been set up at home plate for the final game festivities, and as the swell of traditional boos, mixed with cheers and applause, swept over the stadium the waving and animated Lasorda didn’t hesitate. He stopped at home plate, leaned into the mic and said, “I finally figured it out. You don’t hate me. You hate yourselves because you really love me!”

The place went crazy ballistic as Tommy smiled, waved and turned to take his place for the pregame ceremonies. Two sacred icons drifting into the fog of MLB history…