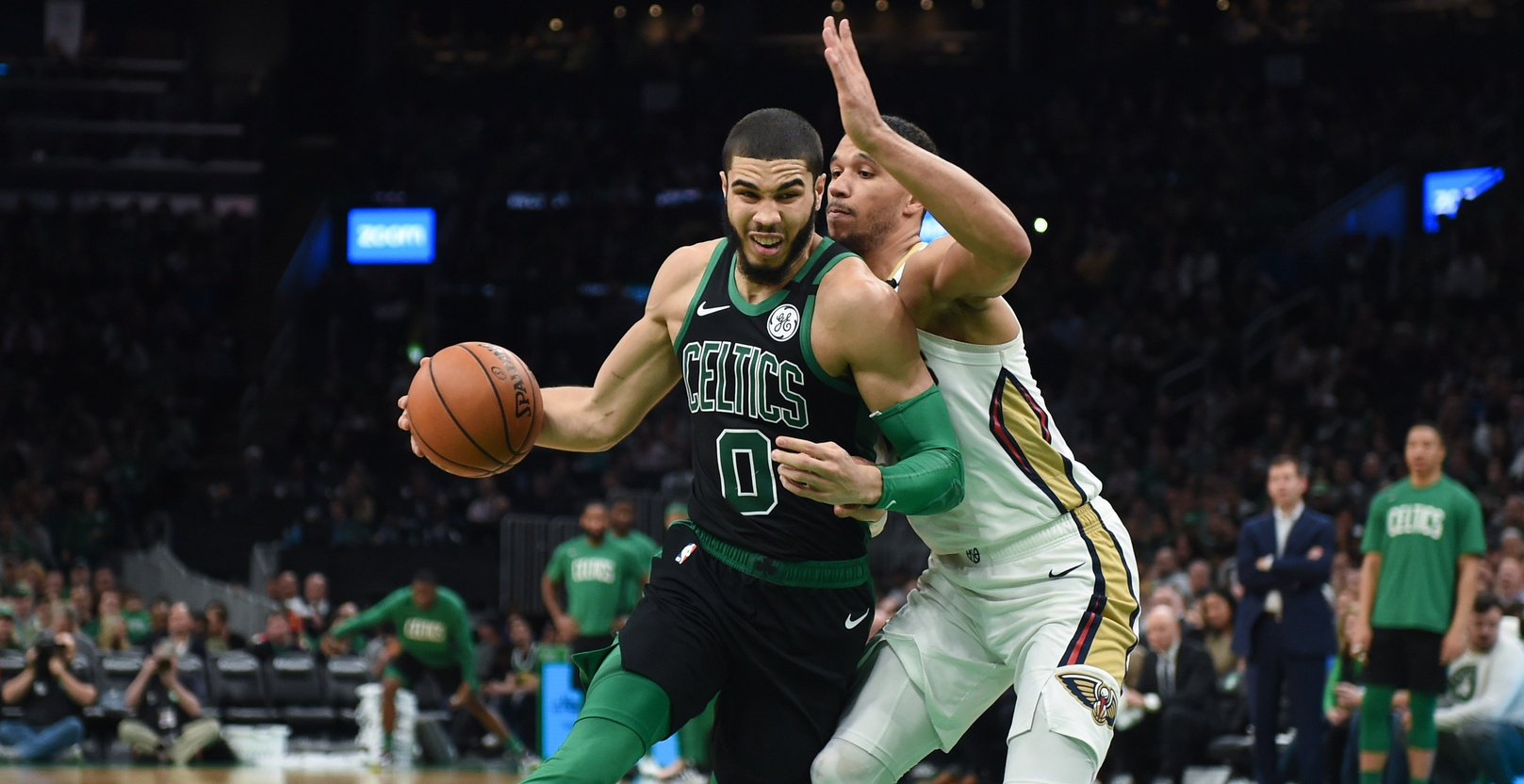 After an atrocious week of basketball where the Celtics lost 3 straight games, Jayson Tatum came in last night against the downtrodden New Orleans Pelicans and put on an absolute scoring exhibition on the parquet.

It’s nights like these where Celtics fans have to be grateful Danny Ainge didn’t offer Jayson Tatum up in any short-sighted trade while he was enduring an uneven second season. Eventually, Tatum was going to get it. Eventually, he was going to play more consistently and maximize his talents.

He remains a work in progress, a gifted swingman developing into an All-Star. Maybe he gets selected in a few weeks or maybe next year, but it’s a given. His career-high 41 points in just 30 minutes, 23 seconds in Saturday night’s 140-105 rout of the Pelicans, was a masterful performance that helped the Celtics snap their three-game losing streak.

Dropping 41 is one thing, dropping 41 in only 3 quarters is another. Tatum accomplished the latter last night in what was a dazzling night from the field for the 3rd year pro. The bill on Tatum for years has been his obsession with mid-range jump-shots and volume scoring. Last night showed us what he can do when he puts it all together and gets away from those two things.

He made 16 of 22 shots, including 6 of 9 3-pointers, without a turnover and (was) a plus-30 in the 35-point win. It was a career-high in points after a rough recent stretch, a sparkling comeback and a reminder of his immense potential…

There are times when Tatum complains too often to officials or settles for mid-range jump shots after passing up open threes. But this season he has improved in both categories. He has embraced his 3-point shooting ability and become craftier in driving to the basket.

We’ve seen it a billion times over watching Tatum over the years. He always has loved to dribble the air out of the ball, take the shot clock all the way down, and then hurl up a fadeaway from 15 feet away. It’s part of the growing pains in the NBA but it’s always a nice reassurance when we get an effort like last night’s

It was the peak of efficiency for him and it’s been fun to watch him bring his game outside the three point line. He’s always been able to shoot it from out there but in the past he’d be more apt to dribble in before taking the shot. Nowadays he uses a quick combo move and either steps back behind the line, or steps into one off the dribble/a screen. Last night in particular he had a run in the third where he simply couldn’t miss.

He simply took over, scoring 19 points on 11 shots with an array of long-range jumpers and picturesque drives to the basket. He closed in on the 40-point mark and reached it with an easy finger roll with 1:04 left. It was another milestone for the former third overall pick, another sign that he’s emerging as a superstar.

He did it all. He had a few threes, drove hard to the basket, and even made things happen on defense by sticking his nose into the passing lanes. Offensively, this is the type of game we want to see from Tatum every single night. Obviously he won’t be going for 40 every game but if he keeps attacking as he was last night, he’ll be seeing a whole lot more buckets.

Tatum also had some thoughts on his career night and it doesn’t sound like he’ll be getting complacent any time soon:

“Obviously it feels good, for sure, but I never get too high or too low when I play well or when I don’t,” he said. “For me, I feel like I have a long way to go. The guys I look up to, they have nights like this more often than not, so obviously it feels good, but I’m just going to try to do it more often and be consistent, continue to get better.”

While he does have this sort of “too cool for school” feel to him at times, I love how grounded he keeps himself. He’s always focused on getting better and whenever he has an accomplishment like this his answers are always geared toward getting to an even higher level. That killer instinct is something that he’s had to develop over time but he’s shown it this season. It’s even more important as he is in line for a 5 year $170 million dollar extension at the end of this season.

Lastly, he ended up in some elite company in Celtic history.

I’ve tried to not overreact about this, but you cannot throw “since Larry Bird” on the back end of someone’s numbers and expect me not to. Sometimes these stat threshold comparisons are a bit phony in terms of how specific they are, but this one is pretty incredible all things considered. One thing is for certain: Tatum will have quite the go at it if he keeps doing things for the first time since Bird.

We all know that one 40-point game doesn’t get you into the All-Star game, nor win you a title, but the more efforts like this we see from Jayson Tatum, the more likely both of those milestones will become.

Tatum and his Boston Celtics return to action Monday night as Zach LaVine and the Chicago Bulls come to town.

“When we talked about the extension, of course, I’m human,” Ingram told ESPN’s Andrew Lopez. “When I look at other guys, I’m like, ‘This (expletive) got an extension? Oh my god. Man, we can lace up right now and play one-on-one to 15 and this (expletive) won’t score.’ That’s how I looked at it as a competitor.”

One of the players who got an extension was Jaylen Brown, who agreed to a four-year, $115 million deal this fall. Many outlets ran with Ingram’s comments, suggesting his target was Ben Simmons or Brown. Several players received extensions, however, including Buddy Hield and Jamal Murray.

“Brandon’s a good player,” Brown said. “I don’t feel any type of way (about the comments), because I don’t feel like they apply to me.”

Now this is the type of stuff that I want to see from one of The Celtics’ young cornerstones. Jaylen Brown has never been one to really get caught up in the hype and drama that the NBA brings and he showed that again Saturday night. It was so simple and so subtle, but the point rang loudly. Brown doesn’t have to get caught up in this type of stuff because he’s above that. He’s a king being asked to respond the opinions of peasants and he’ll keep that same energy 24/7.

Keep it up Juice, you’re doing just fine my friend.

Contributor to Red's Army and an avid Marcus Smart fanatic. Follow me on Twitter @CBon922
View All Posts By Charlie B

Contributor to Red's Army and an avid Marcus Smart fanatic. Follow me on Twitter @CBon922
View All Posts By Charlie B