Your Morning Dump… Where the officiating in this league sucks 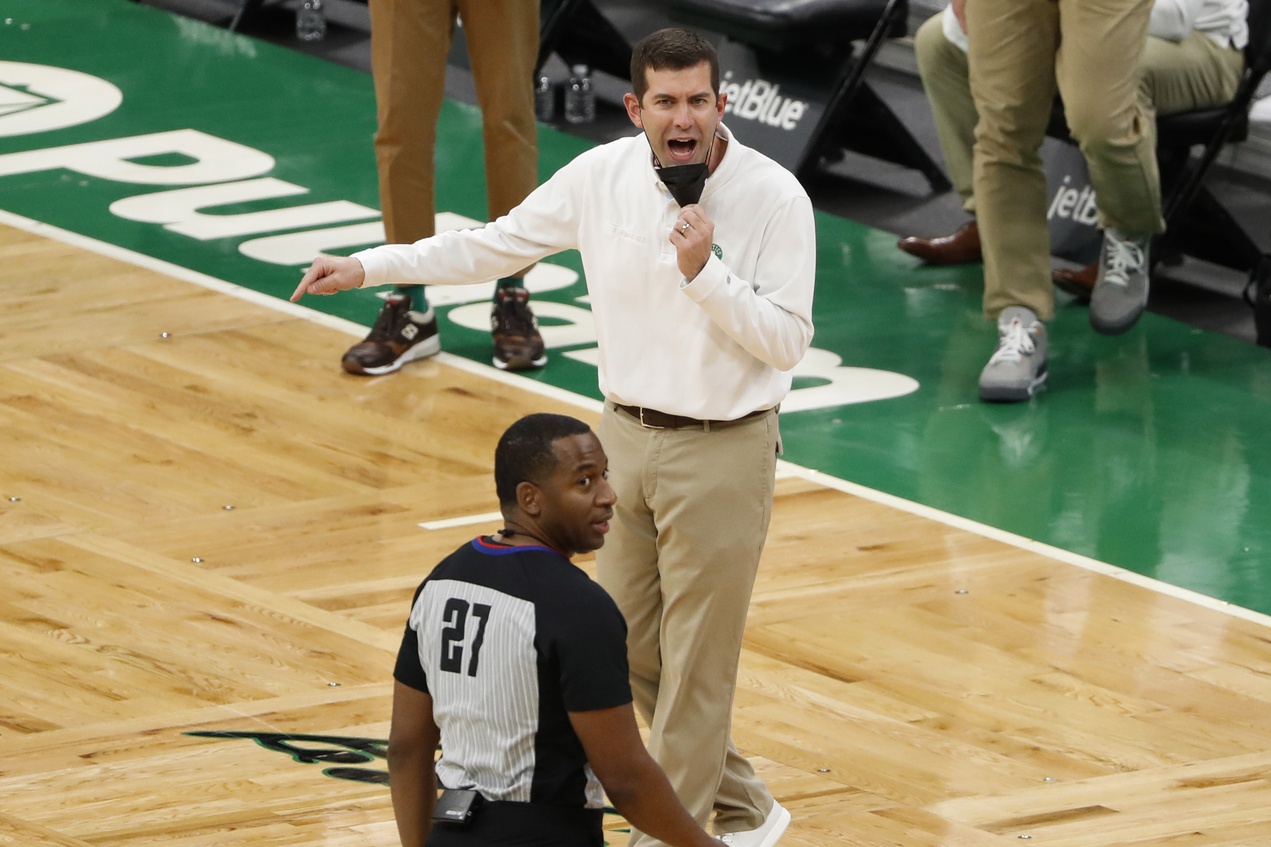 Marcus Smart and Jusuf Nurkic collided with 1:56 left and only three points separating the Blazers and Celtics. When Nurkic stayed down clutching a particularly sensitive area of his anatomy, the officials decided to review the play to see if Smart did anything untoward.

And so they put on their headsets and looked at the play. And they kept looking at it. Then they paused for a moment, and went back to it.

Six full minutes of actual time elapsed before they decided it was an “unsportsmanlike act” and ejected him. And while I personally don’t think that was intentional, that is besides the point.

First off I’m going to say this: That the officiating in the league sucks is not, primarily, the fault of the officials.

These guys are set up to fail.

As if it weren’t bad enough that there are too few refs on the floor, the league’s definition of ‘incidental contact’ is so bizarre and vague that even if everything else were geared in favor of the refs, they would still be stuck trying to apply a standard which begins by stating that every form of contact initiated by a defender is illegal before outlining a series of exceptions that concludes with this happy little number:

Incidental contact with the hand against an offensive player shall be ignored if it does not affect the player’s speed, quickness, balance and/or rhythm.

What the HELL is the difference between “speed” and “quickness”?

And what exactly do those terms mean? And what the hell does a player’s ‘rhythm’ even look like?

You might expect that the league—being largely run by lawyers—would adopt a lawyer’s mindset and define terms like these which have common language meanings that are broad and nonspecific, but, nope. Although the league feels that this exception (which it abbreviates to “SQBR” in the last two minute report) is the essence of clarity and brevity, it is in fact so vague as to be either non-enforceable or enforceable only according to the idiosyncratic internal definition that any given ref chooses to apply at any given arbitrary moment in time.

So your typical ref on the floor of an NBA game is tasked with trying to apply two exceedingly stupid rules: (1) No contact is allowed (2) except contact that doesn’t matter.

You, frankly, are screwed beyond belief if you’re stuck trying to apply those rules simultaneously in a game as fast paced as NBA basketball.

And then if you make a decision that the league disapproves of during the last two minutes of a game, the league is going to tell the whole damn world that you screwed up.

But that’s not all.

The league, which is run by a guy who can’t make up his mind about anything (I’m sorry folks, but those of you who applaud Adam Silver for being… I don’t even know what, anymore, he’s not a very good commissioner. He’s a custodian of the owner’s interests with possibly less creativity when it comes to problem solving than a common crow which can at least teach itself to use rocks to get a piece of food out of a glass of water), has decided in its infinite wisdom that since every other league has instant replay that they too should have instant replay.

And they’ve decided that coaches should be able to challenge calls on the court.

This move was ultimately borrowed from the NFL, which when it comes to the pace of action on the field of play is about as different from the NBA as Russian novels are from Bazooka Joe comics. To expect NBA coaches to be able to gather enough information to correctly identify a blown call and request a review is, frankly, ludicrous.

Then, you have the fact that only called fouls can be reviewed. If your guy gets mugged on the way to the basket and the officials don’t see it, you’re screwed.

I mean coach’s challenges are a terrible idea in the first place—in the NBA as in the NFL and any other league. It is the height of folly to turn correct enforcement of the rules into a strategic maneuver.

But that is what a coach’s challenge is.

It makes correct rule enforcement a matter of gamesmanship, not sportsmanship.

So let’s talk about that.

John makes an excellent point about spending an absurd amount of time looking for something in a few seconds of video.

But I’m going to go a different way with this.

If there were clear and unambiguous evidence that Smart acted in an unsportsmanlike manner, the discussion would have ended rather quickly.

And because that didn’t happen, I think that the bulk of the time spent on the review was spent by one or two of the people conducting the review lobbying the other reviewers.

I think that one or two of the people looking at the video decided based on slim evidence and their own preconceptions that Smart did something that warranted immediate ejection, and they eventually wore down one or two of the other refs. I think Smart was ejected, not because there was any kind of video evidence, but because the official(s) who felt Smart deserved to be ejected had six minutes to nag, harass, badger and intimidate the rest of the crew.

Now the problem with that is that it completely and totally undermines the whole point of having various levels of infraction.

The notion behind actions that warrant ejection is that they should be readily discerned as intentional. Preferably within the flow of the game.

If actions subject to ejection require up to six minutes of analysis to determine whether ejection is warranted, then every damn play in the game should be subject to an extensive review in order to make sure nobody’s getting away with anything.

And if the actions are not clear and unambiguous, dissenting refs shouldn’t be given an unlimited amount of time to lobby their peers for agreement. This isn’t a jury debating the verdict in a murder trial.

You can only have two standards for ejection: Clear and unambiguously intentional actions or actions that require several minutes of review and discussion to discern intent.

If you try to split the difference and argue that some actions require extensive review, then how on EARTH are you supposed to recognize those actions in real time? If it took six minutes to identify an ejectionable offense that occurred during the flow of the game, then how many ejectionable offenses are being missed?

Yes, I understand that refs are human, that they are subject to biases, bad days, and any of a number of other issues. This schedule has been as hard on them as it has been on players and coaches.

I understand all that.

But here’s the thing:

It is not wrong to expect officiating to be a consistent product.

Think about the last burger you got from McDonalds.

Now think about the McDonalds burger you got before that.

Did they taste different?

Nope. McDonalds—and most other fast food places—manage to get a collection of generally underpaid and unskilled individuals to deliver a consistent product day in and day out, coast to coast.

So it’s not as though consistency is impossible.

The problem is that first of all, the NBA doesn’t provide enough referees to ensure a consistent product.

Then, the rules for the game make consistency more a matter of accident than anything else.

Added to that, you have the meta-rules, the rules about rule enforcement (e.g. instant replay rules), which make consistency even more difficult.

And then there’s the shifting standard of rule enforcement, where even if there were enough officials, even if the rules were clear and unambiguous and the replay rules fair and reasonable, the league still has a tacit policy of favoring ‘stars’.

Now I’m not saying that stars should get called for every ticky-tack foul called on a rookie playing in his fifth game. I’m saying that if it’s not a foul when LeBron does it, maybe it shouldn’t be a foul when Aaron Nesmith does it either.