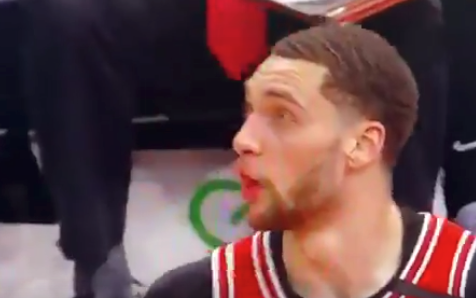 It sure appears as if some of the Bulls’ veteran players don’t respect head coach Jim Boylen.

There have been some tenuous moments between the players and their head coach, and while it wasn’t as serious as what happened with John Beilein in Cleveland, it has appeared as if the Bulls have turned against their coach on a few different occasions, like when they refused to practice last season.

Zach LaVine has been one of the more vocal players, with his facial expressions and body language, in terms of sharing his displeasure with Boylen. That’s why NBA fans took notice when he appeared to fire back at Boylen while the two were arguing during their loss to the Thunder.

“I have 40 f—king points!” LaVine appeared to say.

Zach LaVine has had enough of Jim Boylen pic.twitter.com/wCqKGzu921

This situation isn’t getting better anytime soon, and neither is the Bulls’ record, so it’s hard to see Boylen returning next season.