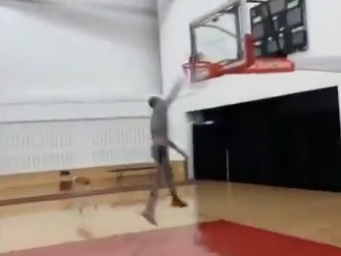 Zach LaVine isn’t competing in the NBA Dunk Contest this year, but he should be, judging by a ridiculous slam he nearly pulled off while practicing.

LaVine has won the event twice, and there was actually some talk about him potentially competing as a last-minute addition this year, given that Chicago — where he plays — is hosting NBA All-Star Weekend.

But instead, he’s just casually working on dunks that will likely be better than the majority of the ones we’ll see on Saturday. Check out this incredible 360 dunk he nearly threw down — taking flight from just inside the free-throw line.

He would’ve broken the internet if he would’ve pulled off that incredible slam.