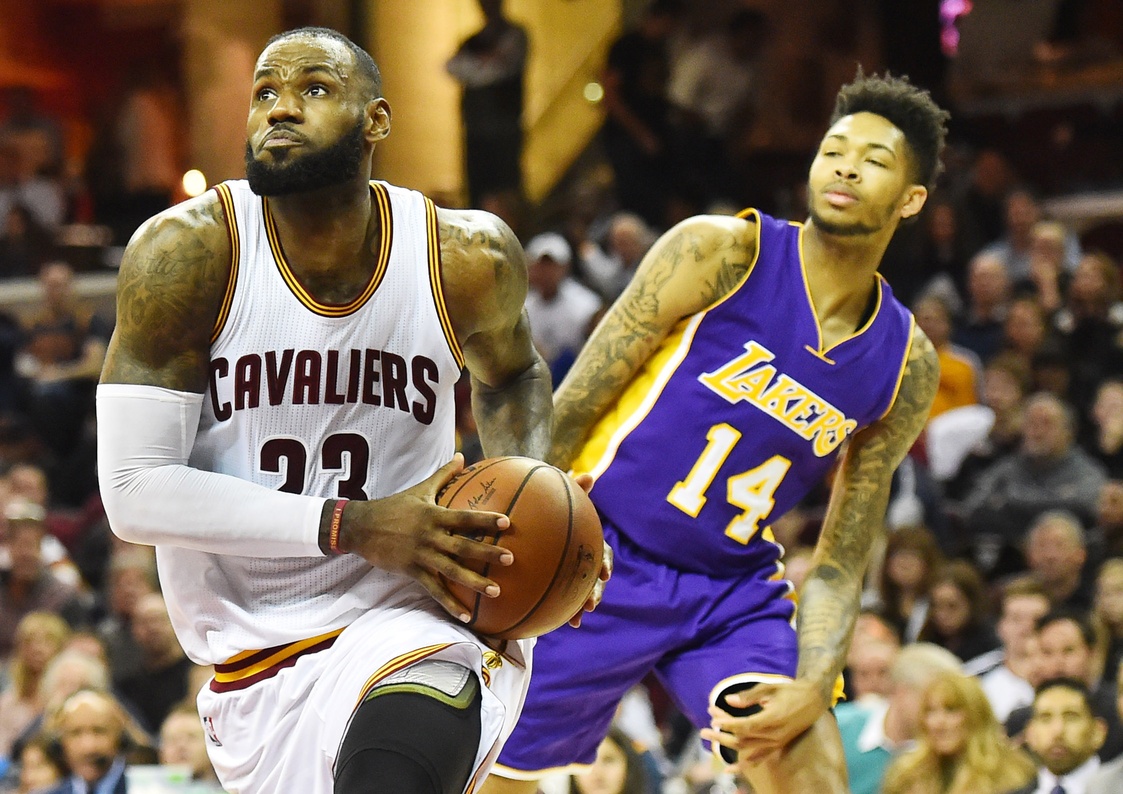 The Lakers are a young team that’s likely years away from reaching their full potential. But that won’t stop them from chasing LeBron James – nor should it.

The first step towards this LeBron James-to-the-Lakers lunacy becoming reality undoubtedly involves Paul George. Forget the fact that James owns homes in L.A. He’s not heading to SoCal without a second superstar – and George is the only other two-way stud being linked to Los Angeles at this point. At 13-14, if the Oklahoma City Thunder don’t shoot up the standings soon, the George-to-L.A. rumors will heat back up eventually, and thus so will the LeBron James-to-the-Lakers hype.

Despite the fact that (what’s left of) Luol Deng is under contract for $18 million next season, the Los Angeles Lakers are only the books for $53,915,756. That leaves about $50 million for the Lakers to play with in the summer of 2018. Below is a list of the players on the payroll for 2018-19 and the ages they’ll be the time next season tips off. (Salary info via spotrac.com)

Among the four current Lakers (Brook Lopez, Kentavious Caldwell-Pope, Corey Brewer and Andrew Bogut) set to become unrestricted free agents in the summer of 2018, Caldwell-Pope is the only one whose best days on the basketball court lie ahead.

If not for Deng’s devastatingly expensive deal, it would be possible for L.A. to re-sign KCP while adding both LeBron and P.G. Now that’s what I call a terrifying triumvirate. Nevertheless, even if we assume there’s not enough money to spread between those three, flanking James and George with Ingram, Kuzma and Hart would afford Los Angeles the most wing depth in the NBA.

Soon-to-be restricted free agent Julius Randle would almost certainly be permitted to sign elsewhere. Randle deserves credit for improved explosiveness and effort. However, he would immediately be expendable in this hypothetical scenario since he doesn’t protect the rim or sink outside shots on a reliable basis. LeBron would simply slide into the starting power forward spot and Larry Nance would hold down the fort as the starting center.

A starting lineup of Ball, the much-improved Ingram, George, James and Nance plus Kuzma, Hart and Clarkson picking up plenty of run as reserves would provide the Lakers with an extremely solid eight-man rotation.

At 10-17, the Lakers are not yet a decent basketball club. Still, it’s reasonable to suggest that this team is growing up fast. Coach Luke Walton is putting the promising rookies in positions to develop and succeed. Kuzma and Hart, three and four-year college players, are more brown than they are green. This team isn’t as young as it seems. At the end of the day, age is merely a number.

Ball would be the best passer LeBron has ever shared the floor with, even on day one of training camp. Lonzo is among the rare few whose outlet passes don’t pale in comparison to Kevin Love. I’ve developed a habit of fast-forwarding through free throws, point guards walking the ball up to the frontcourt, and generally anything that slows games to a crawl. But Lonzo’s Lakers are among the squads that forces me to drop the remote and sit back for fear of missing out. Moreover, despite Ball’s early-season shooting struggles, he is still letting it fly rather than becoming shy to a fault. An underrated part of L.A.’s thrilling three-point victory over the Philadelphia 76ers last week was Ball’s awareness and willingness to fire a trey in order to secure a two-for-one at the end of the contest. Most who watched will remember Ball’s drive and dish to Ingram for the game-winning bucket, but his misfired three-point attempt on the previous possession was actually just as important.

Teams like the San Antonio Spurs and Houston Rockets can offer King James much more established rosters, accomplished stars, and proven head coaches (and front offices). The Philadelphia 76ers have one of the top young two-way trios in the league in Joel Embiid, Ben Simmons and Robert Covington. L.A. cannot really offer LeBron any of these nice things, though they do boast a similarly unselfish culture as those three aforementioned teams. James might not enjoy the same level of satisfaction from winning titles with proven contenders like the Spurs or Rockets as he would leading the Lakers. And James might not be that keen on joining his look-a-like minus a jumper (Simmons), as he may prefer to play his role as Ben’s mentor from a distance.

The fact that the Lakers remain a “long-shot” means that they have not been ruled out (yet). For a storied organization that hasn’t able to woo the top free agents in quite a while, this should be enough for Magic Johnson and company to lose their minds.