Your Morning Dump... Where Dad Brad finds your praise 'uncomfortable' 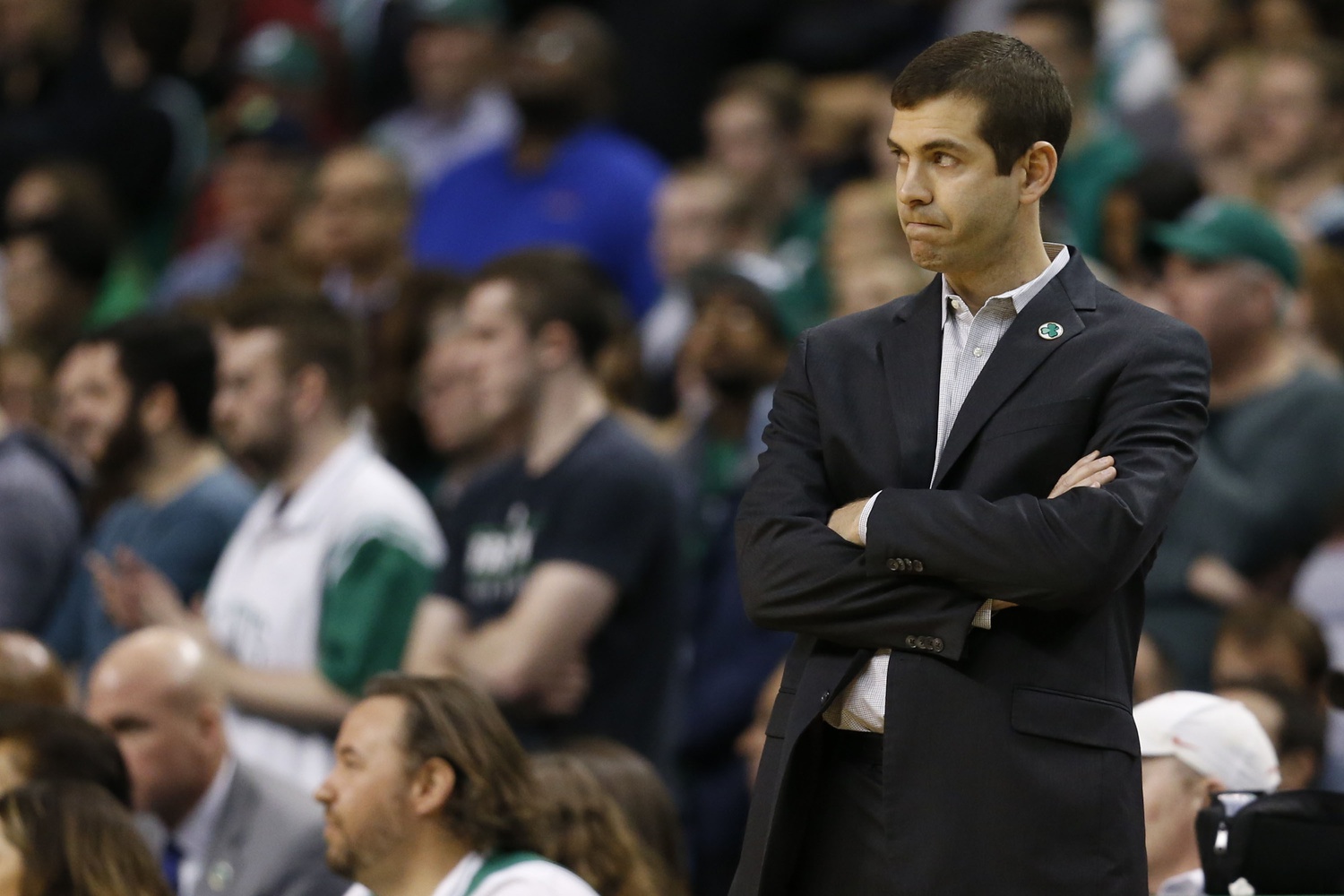 Your Morning Dump... Where Dad Brad finds your praise 'uncomfortable'

On Monday, asked about the glowing evaluations of his performance in the playoffs, Stevens once again made sure to push aside any credit.

“Yeah, it’s silly,” Stevens said. “The praise is uncomfortable, and it’s just something that these guys should be getting it all. We all have a role to play, and we all need to play that role as well as we can.”

In fairness to Stevens, his players have indeed put together a remarkable postseason performance. Jaylen Brown, Jayson Tatum and Terry Rozier have all played above their years. Al Horford is the glue holding the team together. The defense has been on a string, limiting opponents from all over the court.

So, let’s be honest here, Brad Stevens has a high degree of self-confidence. There’s no way you can draw a seven figure salary and tell eight figure salary guys what to do with authority unless you think you belong where you’re at.

At the same time, Brad’s also much more perceptive than your typical NBA coach. You look at the other coaches in the league and so many of them got where they are by ceaseless self-promotion, by working their connections, talking up their past achievements, and basically selling themselves to TV executives and league executives.

Brad didn’t have to do any selling, and I think it’s given him a rather unique perspective on the job he holds.

Make no mistake, he thinks he deserves the job, but he also understands the limits of the job–and he’s perceptive enough to understand that the second he starts to take credit, he’s taking something away from his players.

So yeah, you know why all that praise makes Dad Brad “uncomfortable”? Because he has to spend that much more time reminding and convincing his players that he knows that it’s not all about him.

Page 2: Where you got to pay your dues…

The result of this series might not depend on LeBron. It will depend on whether LeBron has anything of value around him. He didn’t on Sunday; Kevin Love was meh and the rest of Cleveland’s starters totaled 31 points. The whole team was held to 35 points in the first half. They’re bad defensively. It’s entirely possible that this team kind of stinks. One could say LeBron is the least of the Cavaliers’ concerns, but then again he’s also their only hope.

In his press conference, James belittled a reporter with a very condescending, “I don’t know if you’ve followed my career” spiel about how he uses the first game of a series to feel out the opponent. That’s the stupidest thing I’ve ever heard in my life, but honestly it’s more believable than LeBron James only putting up 15 points a game for a whole series.

The sad thing if you’re a Celtics fan is that, perhaps even without a supporting cast, James is capable of beating a better team — within reason — at any time. Hell, even in that extremely un-LeBron performance, he was sniffing around a triple double (seven rebounds, nine assists).

Love that song. That’s your guy George Harrison playing guitar (he produced the song too).

Tonight’s game ain’t gonna come easy–but if it does, holy crap, the Cavs are toast, and the Raptors are the craziest story in a crazy crazy (remember when Dwight Howard was traded? Of course you don’t because it’s been that crazy) season.

The Cavs are likely to start Tristan Thompson, which means a bit of adjustments on the Celtics’ side of the ball. Thompson did well against Horford when he was on him in game 1, but that’s also, in part, because Stevens wasn’t trying to neutralize any advantages TT has over Horford.

But this is really all about LeBron.

Of course that assumes that LeBron gets those extra points in addition to what the rest of his team delivers.

It’s the Celtics’ collective responsibility tonight to see to it that any LeBron explosion comes at the expense of his teammates instead of augmenting their performance.

The crazy little secret about Boston’s game one win–at least, I haven’t seen a lot of chatter about it–is that LeBron’s exceptionally poor performance was basically a bonus. Their whole defensive scheme was to keep a man in front of him (often switching, as seen by the number of players who guarded him), and stay home on every one else. If LeBron got by his defender, so be it. Let him have his two points–just so long as he can’t kick it out to a perimeter guy for three.

If LeBron makes more of his shots, the Celtics still win, probably. Not with Gino time, not with the starters pulled halfway through the fourth, but the C’s still win.

But I have a feeling they’re gonna have to pay their dues tonight.

Like when Steph Curry nails a three from thirty feet away and the Oracle crowd goes wild, and then Klay or KD hits another on the next possession, LeBron has a way of not only contorting the defense on the court, but influencing the way the other team runs its offense.

All these players are pros. They’ve been doing this stuff for years. But they still recognize amazing when they see it.

It takes a lot of discipline to see a crazy one-on-one display like what LeBron is capable of (and which the Warriors use to spectacular advantage), acknowledge it, and then realize that there ain’t no style points in the NBA.

Curry pulls up, hits a three from 30′ out with like 18 seconds on the shot clock and guess what? It’s worth exactly three points. The same as a shot that comes with three seconds left on the clock after five passes in an offensive set. Ditto crazy LeBron maneuvers that result in two points, or–given the generosity of refs and their willingness to ignore LeBron’s fullback grip on the basketball–a chance at three points.

This is an area where Stevens’ background is huge.

Stevens spent his entire college career teaching guys to ignore the spectacular, and it shows. They’ve been the best team in Oracle for his entire career, and there’s a reason for that: They don’t. get. rattled.

Playing LeBron is good prep for playing the Warriors (if the C’s make it that far), because LeBron’s second greatest skill is his ability to make you think you have to play like him to beat him.

Finally: LeBron is not a good teammate

In a response where LeBron recalled every move on the court, he forgot the name of one of his teammates.

LeBron gets assists, and part of the success of his teams is predicated on finding open perimeter guys when he collapses the defense.

But that does not make him a good teammate.

You listen to his remarks from that loss “…I don’t know if you’ve followed my career…”, confusing Jordan Clarkson with Jordan Crawford, etc., and one thing becomes clear: it’s all about LeBron.

That stuff that “leaked” awhile back about LeBron wanting to play more “off the ball” in the future? That’s classic LeBron–his career has been this gradual progression from ‘really good player’ to ‘outstanding player who wants to control everything’.

What if the best move for the Cavs, next year (if he stays there), is for LeBron to continue to be the primary ball-handler in offensive sets? Is LeBron, if he’s serious, going to accept that? Or is he going to insist on doing what he wants and complain because the roster hasn’t been re-contoured to meet his preferences?

There was a wide variety of coverage yesterday centered on the idea that Kyrie and Hayward are quite possibly sad and almost certainly unnecessary. I’m not posting any links to that stuff because, frankly, time spent reading that crap is precious seconds of life wasted (of course, if you’ve gotten this far, you’ve already wasted considerable time on my opinions on Ringo Starr, George Harrison, Brad Stevens and LeBron James–and frankly, I don’t know that it was worth it).

Anyway, on with the rest of the legitimate links:

Boston.com: Guess who’s missing Kyrie Irving the most? (hint–it’s not someone on the Celtics)