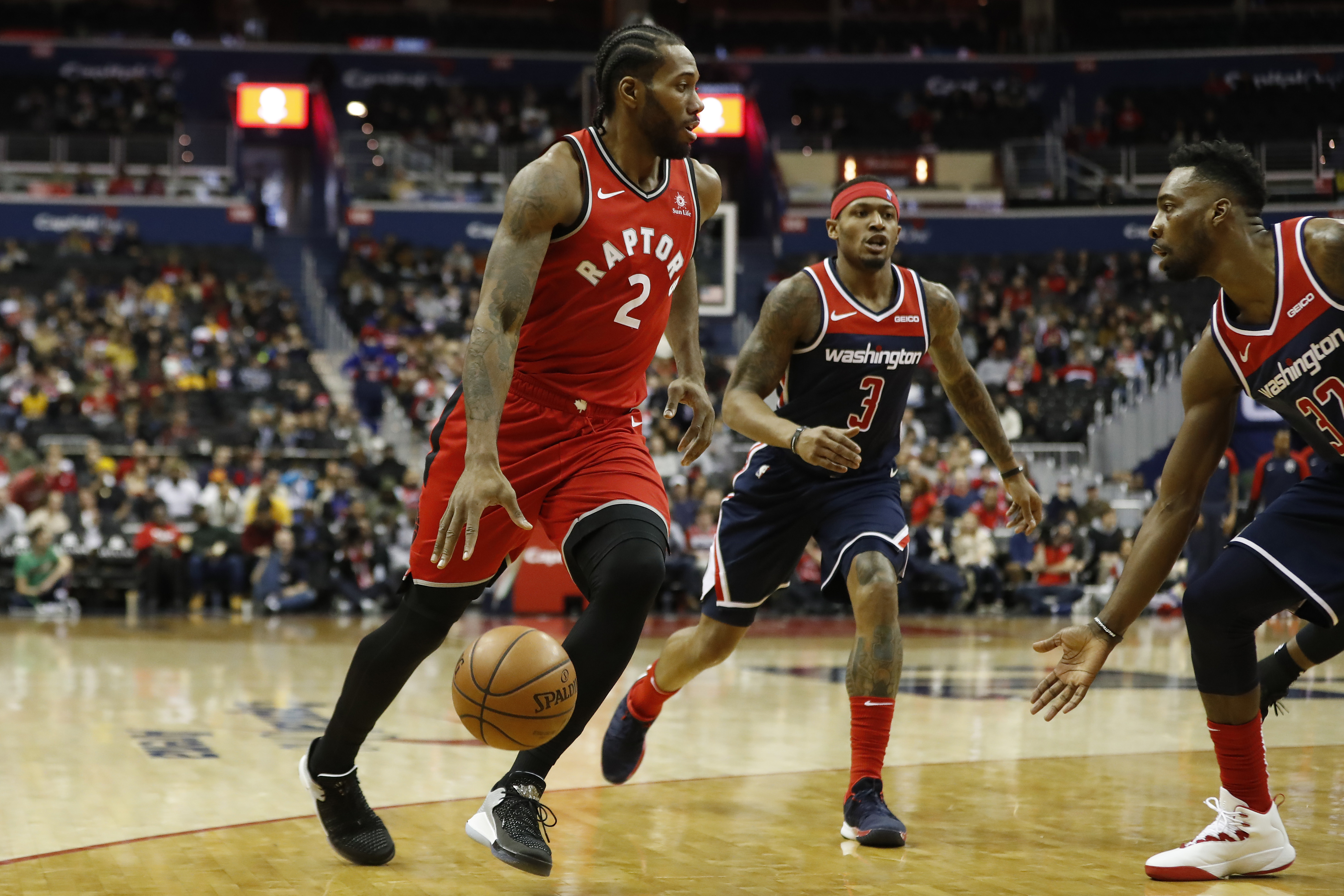 When healthy, Kawhi Leonard is an elite two-way player. He is arguably the best defender in the league, and one of the best offensive players in the league. Many people have different opinions on who the second best player in the NBA is, behind LeBron James. For me, the second best player in the NBA is Kawhi Leonard, because not everyone can guard the oppositions best player on a day-to-day basis and average 26.6 points on 50% shooting. During the playoffs, Kawhi looks healthy, and we see what he is made of. In the first round of the playoffs, Kawhi averaged 27.8 points, on 55.5% shooting, 6.6 rebounds, 3 assists, and 1.2 steals per game. Some people forgot how good Kawhi was, before getting injured. Now, he’s showing everyone what he’s made of when healthy, on the biggest stage. In game 1 of the semi-finals, Kawhi scored 45 points, on 69.5% shooting, 2 assists, 2 steals, and 1 block. Leonard will become a free agent after this season, but where will he go?

Kawhi re-signing with the Raptors is still a possibility, especially if they win or reach the finals, this season. Pascal Siakam is a promising talent, and he is just 25-years old. Kawhi may want to stay in Toronto, and continue dominating in the Eastern Conference, knowing he may have an up and coming star with him. It seems that Kawhi is close with his teammates now in Toronto, and they could persuade Kawhi to stay for at least one more season. The Raptors’ recruitment pitch will depend on what happens at the end of this season. If they reach the finals but don’t win, the recruitment pitch could be, next season we will be better and win the championship if you return. If they don’t reach the finals, the recruitment pitch could be, we have something special here, with the development of Siakam, balanced and versatile team, if you re-sign, Raptors will make the finals next season.

Who wouldn’t want to play in the purple and gold? Now, we know that Kawhi wants to join a team where it will be his team. If he goes to Lakers, it will still be his team, but he will have to share that spotlight with LeBron James. Just imagine, Kawhi Leonard and LeBron James on the same team. The top two players in the league on the same team. If they can sign Kawhi and continue developing Brandon Ingram and Lonzo Ball, assuming Lonzo doesn’t get traded before the season begins, the Lakers can be a very dangerous team. Most players would do anything to play with a talent like LeBron James. But not all, Kawhi being one of them. He’s stated previously that he wants to play in LA, and play for a team that will be known as his team. A few NBA analysts think there is no chance Kawhi will sign with the Lakers, because of LeBron. But, I think if Kawhi does join LeBron in LA, this will be a championship contender team, automatically. The Lakers’ best recruitment pitch to Kawhi will be, this franchise is built from championships, and what better way to win then joining LeBron James, the player who has been to the finals for the past eight straight seasons, and joining a team with a promising young core.

Who wouldn’t want to play in LA? You may be wondering why I have the Clippers as Kawhi’s top destination and not the Lakers? Well, Kawhi did say he wants to play in LA, and he wants it to be his team. That team is the Clippers in LA. Yes, Lou Williams, Montrezl Harrell, and Patrick Beverley led this team to the playoffs and won two games in Golden State. But, imagine this team with the addition of Kawhi Leonard? The Clippers will have three options in crunch time, between Kawhi, Lou, and Harrell. Shai Gilgeous-Alexander looked great in the playoffs, and he’s slowly but surely developing, per game. Kawhi could join an already playoff ready team, and if Patrick Beverley re-signs with the Clippers, they could be a top-four team in the Western Conference next season, with the addition of Leonard, and could reach the finals as well. The Clippers’ best recruitment pitch to Leonard will be that they have two max slots available, that could land another superstar alongside Kawhi, possibly Kevin Durant.

The ideal destination for Kawhi will be the Clippers because it will be his team; he will be playing in LA with an already made playoff team. An even bigger reason the ideal destination for Kawhi is the Clippers, because of the extra max slot for a superstar, such as Kevin Durant, Kyrie Irving, Kemba Walker, or Jimmy Butler. Durant being the likely player out of those four. It will be very tough for Kawhi to turn that offer down from the Clippers even if it means rejecting an offer from the Lakers and playing with LeBron. The Clippers will also be a good fit for Kawhi, as they don’t have a solidified small forward. Danilo Gallinari will likely play at the power forward spot, and Montrezl Harrell at the center spot when all three players are on the court together. So, the best destination for Kawhi Leonard is the Los Angeles Clippers.