Your Morning Dump... Where Tacko's got an NBA contract 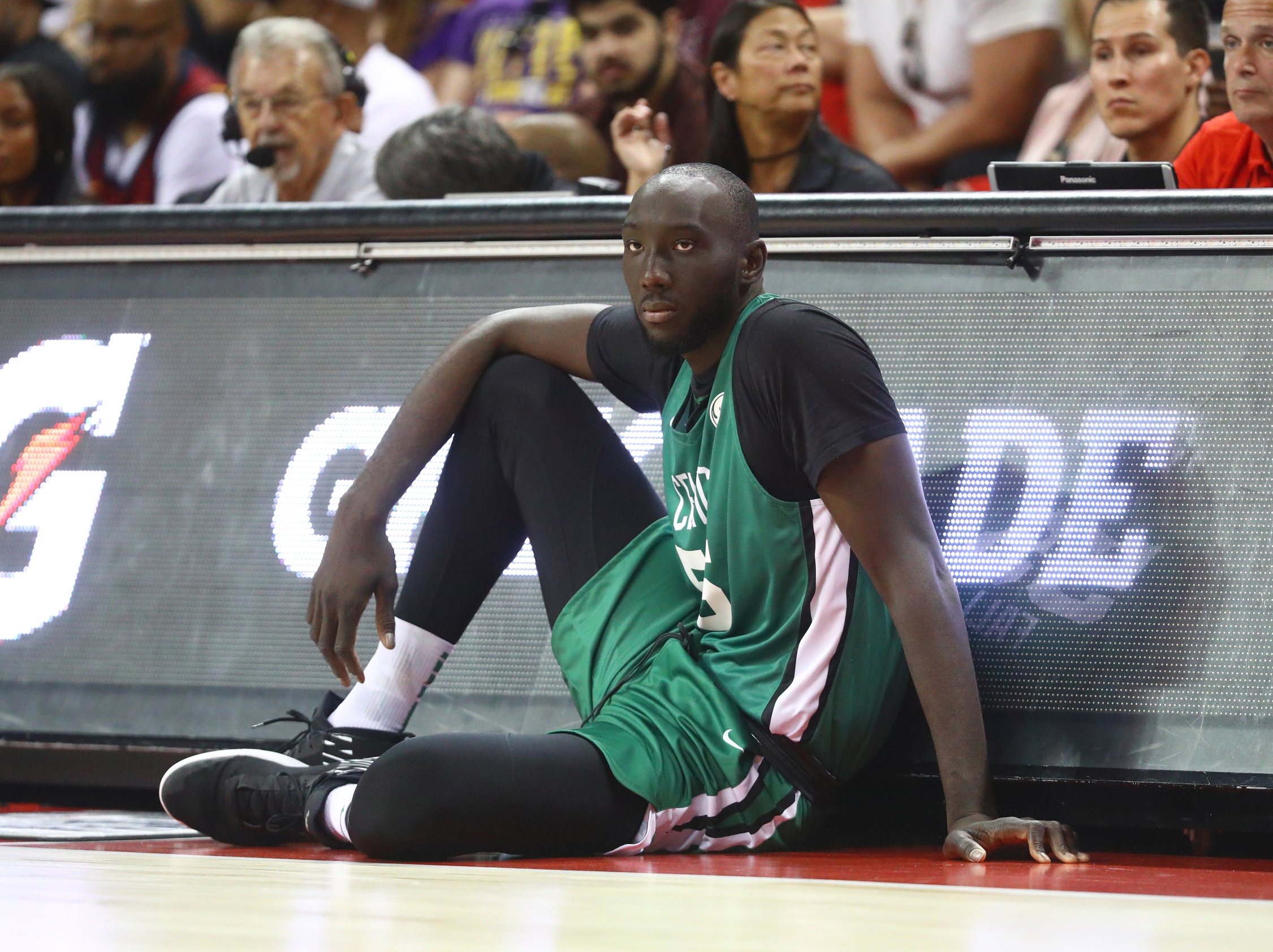 Your Morning Dump... Where Tacko's got an NBA contract

“He’s a great kid, he’s working really hard,” Danny Ainge recently said. “We want to take his development very very seriously. He’s a high priority for us to try to really develop into a player.”

That development will also, partly, be an evaluation. His summer league success was fine, but what can he do against real NBA players. What will he do when he’s faced with guarding good basketball players or defenses that aren’t a hodgepodge of fringe NBA players? Will he still be amusingly effective?

“Tacko is fun to watch. He makes me laugh,” Ainge said. “Some of the plays he makes are hilarious because you just don’t see them. Guards get in a bind and they just throw the ball up in the air, then Tacko grabs them and makes tip-toe dunks from under the basket. It’s just like a senior in high school playing against fourth graders sometimes out there.”

Excited to be part of the Celtics' organization. It's the beginning of seeing my dream come true. There is still lots of work to be done to secure a spot on the active roster by the time the season starts. Gonna stay humble but I'm hungry and determined!

The Celtics also announced the signing of Tremont Waters, Max Strus and Javonte Green. The first two were signed to the C’s available two-way slots, while Javonte Green was signed to an NBA contract like Fall.

John surmises that both Fall and Green were signed to partially guaranteed minimum contracts. As the C’s are over the soft cap, they would have to sign these guys to minimum deals, and the contracts are likely not guaranteed for the full season because that would give the team sixteen full season contracts and they can only carry 15 players on their roster.

There are an interesting set of circumstances around Tacko Fall… This isn’t a situation like Giannis, where you had a guy playing in a second-rate Greek pro league far from the spotlight and far from quality competition. Fall came up through conventional channels, playing four years with the University of Central Florida in the AAC. He declared for the 2017 draft and then pulled his name when it became apparent that he would likely go undrafted.

I want to get excited about Tacko, and I’ve said before that, on the whole, NBA teams are horrible at evaluating talent in the draft. But that’s with a caveat: Average to bad NBA teams overemphasize the wrong things when evaluating talent, but they rarely draft players that flat out don’t belong in the NBA, and after 60 picks are made it’s a safe bet that all the NBA caliber college players available have been picked. Tacko Fall went undrafted, and while a half dozen scouting teams might have missed something, it would be rather unexpected for all 30 scouting teams to overlook a guy who’s 7’7″ and who can dunk the ball without leaving the floor.

Kid was at the combine. Everybody knows pretty much everything there is to know about him, and he went undrafted–why?

In short, he’s too tall.

When people end up that tall, they don’t scale up proportionally. As a result, generally speaking, they can’t move as well as smaller players. Defensively, Fall will likely have a hard time guarding players in space, especially out on the perimeter. On offense, a similar problem will exist. What puts the “freak” in the “Greek Freak” is how well he’s able to move with the ball. Tacko does not have similar abilities.

Further, Fall’s ability to protect the rim will be impacted by the NBA’s defensive three second rule. Normally, officials pay scant attention to this rule, only enforcing it when there are egregious violations. However, with Tacko camped under the basket, opposing coaches will be riding officials to monitor his time closely.

And, Tacko Fall as post defender is basically the opposite of Marcus Smart. Where Smart has the ability to move taller players off the block because he knows how to use his lower center of gravity, Fall probably has the highest center of gravity in the league, and that means that even crappy post players should be able to create space by working against him—of course they’ll need to create enough space to clear his eight foot wingspan, but even there, Fall is going to be called for plenty of phantom fouls because of his ability to cleanly reach places every other player in the league can only reach by fouling.

Scouting reports also make much of Fall’s lack of development while at UCF, but I don’t put a lot of stock in that. Developing a player like Fall is quite a challenge, and Fall’s natural abilities were more than adequate for the role he played in the UCF system.

It will be very interesting to see what Stevens does with Fall. To his credit, Fall is apparently studious–Wikipedia says that his SAT scores were in the 95th percentile, and he majored in computer science at UCF (which includes some terrifying math courses). If he’s ready to learn, I can think of few organizations better prepared to teach him how to maximize his abilities in the NBA.

Page 2: Where the Celtics have officially purchased the Red Claws

The local ownership was responsible for off-court business operations.

“The Celtics have been great partners with the Red Claws over the last ten seasons. We are thrilled that the Celtics will continue to build upon the success we have had in making the Red Claws an important part of the Maine community,” said Bill Ryan Jr., Maine Red Claws Chairman and Principal Owner, in a statement.

The Celtics will be come the 25th NBA team to purchase their G-League affiliate.

In a lot of ways this isn’t surprising. Owning a minor league franchise is not exactly a lucrative undertaking, and with as close as Boston is to its G-League affiliate, I would guess that this arrangement will make it easier for Portland’s team to tap into Boston’s existing corporate relationships.

A couple years back, the Miami Heat purchased a controlling interest in the Skyforce, my hometown’s minor league basketball franchise (a franchise considerably older than the G-League itself), and very little changed in day-to-day operations—the main difference was the team rebranding to the Heat’s colors and more prominent use of Heat logos in conjunction with the Skyforce’s operations.

Coach Brad Stevens is completely on board with the high number of Celtics that could be competing in the 2019 FIBA World Cup this summer.

As for whether he thinks the practices and games will provide a chance for the group to build some early chemistry? He doesn’t buy too much into that, either.

“I don’t think that really factors in a whole lot because there’s 12 other guys on our team,’’ he said.

Heh. Sure, Brad. There are twelve other guys on the team, but three of your best rotation players are going to get extended time with your brand new point guard well before training camp opens. I’m sure, after a season derailed by chemistry issues, you’re pretty ‘meh’ about all this.