Your Morning Dump... Where the Celtics are focusing on the guys in the locker room 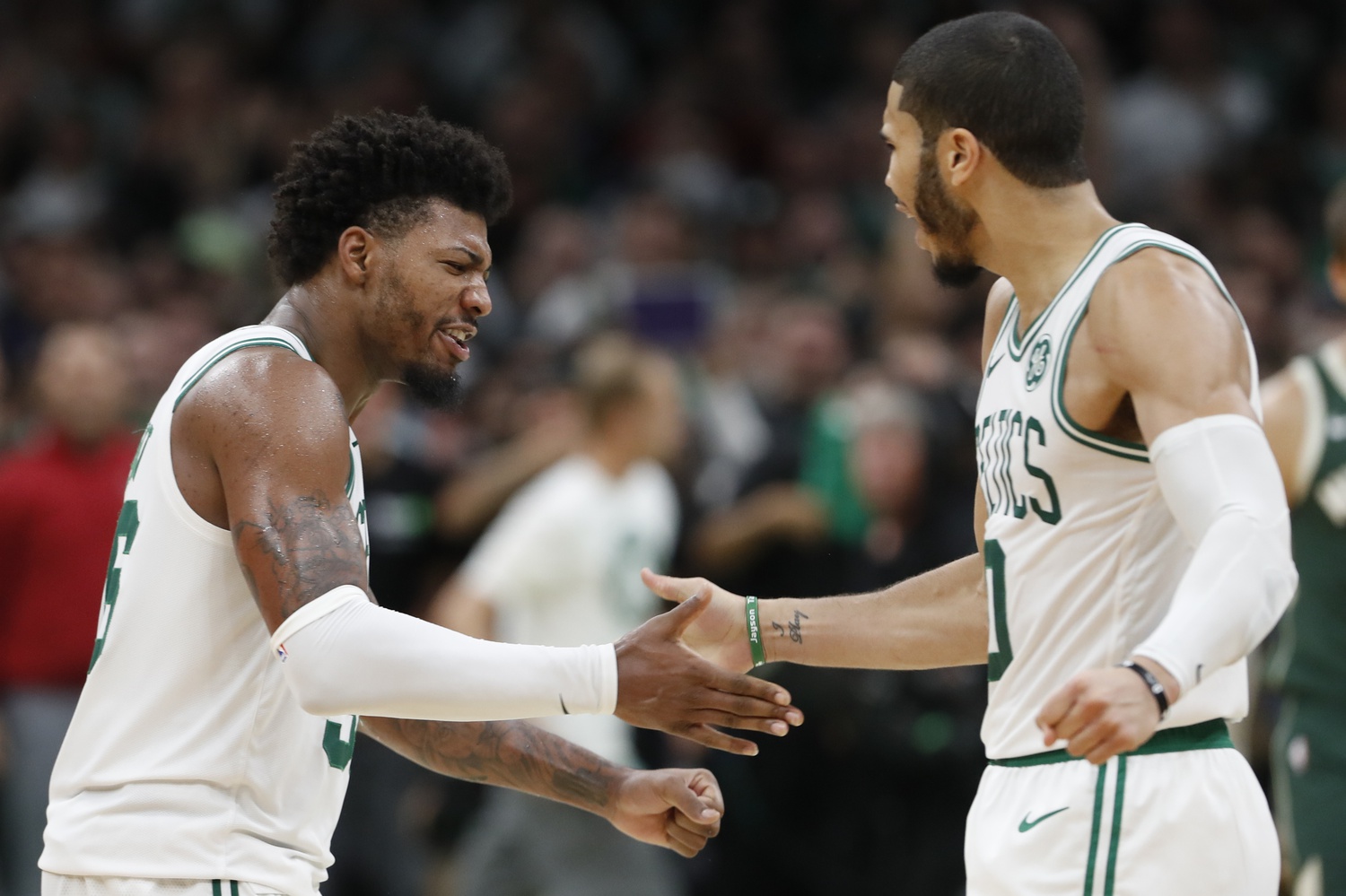 Your Morning Dump... Where the Celtics are focusing on the guys in the locker room

The Celtics, however, weren’t talking about absence after rallying from a 19-point deficit to claim a 116-105 victory. In fact, they (understandably) sounded a little sick of the topic.

“Al’s gone,” Jayson Tatum said, when asked about Horford’s absence. “We can’t be talking about Al.”

Tatum was asked a follow-up.

“He is a great player, but like I said, Al’s gone,” Tatum said. “We’ve got to worry about the guys in this locker room.”

After all, the guys in the Celtics’ short-handed locker room proved capable of beating one of the favorites in the Eastern Conference on Wednesday.

Anna Horford captured an interesting still from Wednesday’s brawl between Embiid and KAT:

Al Horford was a great teammate while he was in Boston, and an underrated contributor at both ends of the court. You can’t find anyone on the Celtics that has a bad thing to say about him.

However, that pic above says a lot. Last year the Celtics desperately needed a vocal leader capable of imposing order on a locker room that was, if not fractious, certainly not cohesive and on the same page. It has been established (to death) that Kyrie was not and is not that kind of a guy.

But, as can be seen here, neither was Al. It’s not in his makeup to wade into a fight and try to keep his exceptionally immature teammate from doing something stupid.

Last year’s Celtics team needed this year’s Marcus Smart—and while some of the maturity that Marcus has displayed starting with his Team USA experience is undoubtedly due to lessons learned last year, part of the emergence of Smart’s leadership can be chalked up to the departure of Kyrie and Al. And if either of them are still with the team, it’s an open question whether Marcus would be as vocal as he has been thus far.

So what we have now is a team that looks a lot more like the IT teams, scrappy, underrated, and tight-knit. But also more talented than the IT teams.

Page 2: Where Marcus Smart is a whistle-grifter

Marcus Smart jammed his posterior into the lower body of Giannis Antetokounmpo even before Pat Connaughton elevated with a 3-point attempt. By the time the ball got to the rim, Smart had driven the reigning MVP out of the restricted area to allow Kemba Walker to swoop in for the rebound.

An annoyed Antetokounmpo, his right arm tangled with Smart, wrapped his free arm around Smart’s back and fell backwards, seemingly intent on drawing a foul call. Smart, well versed in the art of whistle grifting, raised his hands towards a nearby referee to demonstrate that what was about to happen wasn’t Smart’s fault.

Antetokounmpo crashed to the floor in front of the Bucks’ bench and Smart — arms still outstretchd — splashed on top of him like Jimmy Snuka coming off the cage against Don Muraco. As players rushed over in fear of a scuffle, Smart calmly disengaged and pleaded his case to referee Marc Davis, who charged Antetokounmpo with the loose-ball foul.

Here’s the play in question:

.@Scalabrine "What is that, Mike?"
.@celticsvoice "It's a tackle." 🤣 pic.twitter.com/qq8MOq5PEZ

Smart benefits from the fact that this exchange happened in space and right in front of a ref. A tangle like this in traffic under the basket likely results in a foul on Smart because if the refs can’t see clearly, they’re almost always going to favor if not the star, then the team with the ball.

There are people who dislike this style of play. I’m not a huge fan of it myself. However, I’m also not a huge fan of the game’s focus on three point shooting, but only a fool would allow aesthetic considerations to get in the way of stuff that improves your odds of winning.

What Forsberg highlights, though, is a master class in how to grift on defense.

Finally: No thanks, Golden State, you can keep him

A popular thought has been to wonder aloud whether the Warriors should dive fully into tank-mode and trade Draymond Green to acquire assets and rebuild.

If you’re a Boston Celtics fans and you’re wondering this, take a step back from Twitter and take a deep breath.

I don’t like Draymond Green. I think he’s about as overrated a guy as you can find in the NBA these days. He’s built his defensive reputation off cheap shots, dirty plays, and pushing the limits of what refs will allow.

If the choice comes down to Marcus Smart’s ability to grift versus Draymond Green’s ability to sneak in an extra elbow when no one’s looking, I’m going with Smart all the way.

MassLive: Jayson Tatum floaters, bench performance, and 5 things to watch in Boston Celtics vs. New York Knicks | Presidential candidate Pete Buttigieg & Brad Stevens dress up as each other for Halloween

Boston.com: Brad Stevens and Pete Buttigieg went as each other for Halloween