Your Morning Dump… Where Daniel Theis makes a statement 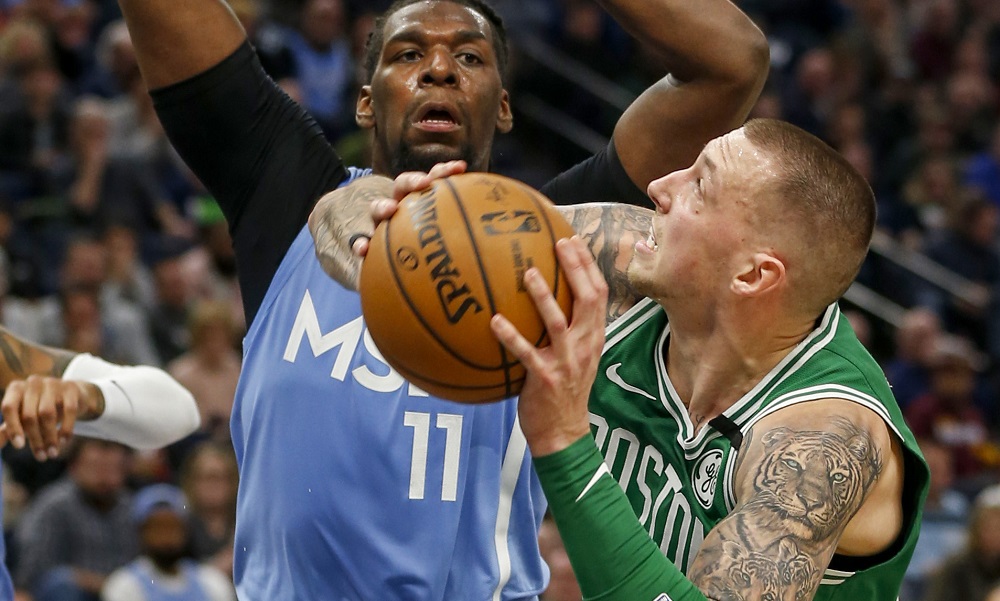 Your Morning Dump… Where Daniel Theis makes a statement

Last night vs. Minnesota, for the first time literally in decades, four (4!) Celtics scored 25 or more points each in the same game. Let’s look at the list.

Yes, Theis played the game of his NBA life, setting career highs in both those categories. He also became the sixth Celtic to score at least 25 in a game this season.

In 28 minutes at Minny, Theis shot 9-of-14, was perfect (6-of-6) at the foul line, made a three, and grabbed 6 of his boards on the offensive end, helping Boston to a 16-8 advantage in second-chance points. Eight of his points and 5 boards came in the 4th quarter, when the Cs finally put away the pesky Wolves, who got within 1 point of Boston several times but could never take the lead.

And on a career night from Daniel Theis – Last Celtic center with at least 25 and 16 was Al Jefferson in 2007. So, a while ago.

Theis gave little indication that he was in store for a career night early Friday. His first shot smacked off the backboard so hard, it caromed away from Marcus Smart, who was in position for an offensive rebound. His second hit the back iron, and Stevens pulled him shortly afterward in favor of Enes Kanter.

“I got my mind right, came back to the bench and focused, and said next time I go in I’ll play way different,” Theis said. “Play harder and just run the court.”

When he returned, the Celtics began putting Theis in pick-and-rolls. The Timberwolves didn’t have a good answer, particularly with rookie Naz Reid — the recipient of his first career start in place of injured star Karl-Anthony Towns.

MassLive: Boston Celtics’ Jayson Tatum makes sure to thank Daniel Theis for screens: ’I get a lot of buckets off Theis’

OK, it wasn’t against KAT, but regardless, Theis did what he needed to do – in fact, he wildly exceeded expectations. On a night when his center rotation partners, Enes Kanter and Grant Williams, combined for zero points, Theis made up for their futility.

And that’s what typically happens. Some nights Kanter will produce with his putback skills, other times Grant will spark the team with Smarf-like winning plays, and then Theis is usually there to play strong defense and chip in points when opponents focus on Boston’s main playmakers.

The Cs’ lack of size in the middle hasn’t kept them from defending, either. They rank third in defensive rating (105.8), third in fewest points in the paint allowed (43.0 per game), fifth in opponents’ effective field goal percentage (50.8%), and tied for 10th in rebound percentage (51.0%). Last night the Celts allowed the Wolves a 111.4 offensive rating, but won all those other categories.

All these facts together reiterate why Danny Ainge didn’t need to disrupt the team with a move for a big-name big like Andre Drummond. One or two of Boston’s bigs usually step up every game, and with Rob Williams about to return from injury, the center rotation will become even more deep and versatile.

Last night, it was Daniel Theis who reminded us of that.

On Page 2: Brad moves up

As John Beilein just found out in Cleveland, coaching in the NBA is verrrrry different than guiding a college team. The list of failures is long – does “Rick Pitino” ring a bell?

Brad is the exception to the rule. This is his seventh season in Boston and, currently at 39-16, he’s on his way to his third time exceeding 50 wins.

Now he needs to get what the four other all-time top Celtics coaches have: a championship banner. Don’t let us down, Brad.

The Celtics face the Lakers on Sunday at 3:30 Boston time, which is 12:30 local time. It’s an odd start time but at least one of the guys on the team is cool with it.

“Oh, I love it. I love those early games. I’m used to getting up early,” Hayward said. “You get the rest of the night then to hang out. Certainly we’ve got to be ready. We’ve got to make sure we get some good sleep, an early breakfast and be ready to go. I’m probably a minority, I’m guessing. But I think that’s what kids do to you. They’re ready to go early.”

It’s been said that LA nightlife is undefeated, so if the Celtics partake, they might need early-bird Gordon to carry them on Sunday.

I’m kidding, but at the same time many of them are 21 or 22 years old and full of, um, energy. They might believe they can spend a late night clubbing and still handle an early tipoff without being embarrassed by the Lakers.

My hope, naïve though it may be, is that some of the veterans will remind the team that they’re in LA for only two reasons: to play on Sunday, and to attend the Kobe memorial on Monday. If they want to respect his memory, they need to first respect the game. So…

Herald: Celtics begin the stretch run with a 127-117 win over Minnesota

The Athletic: A pit stop, playoff talk and how the Celtics think they can win